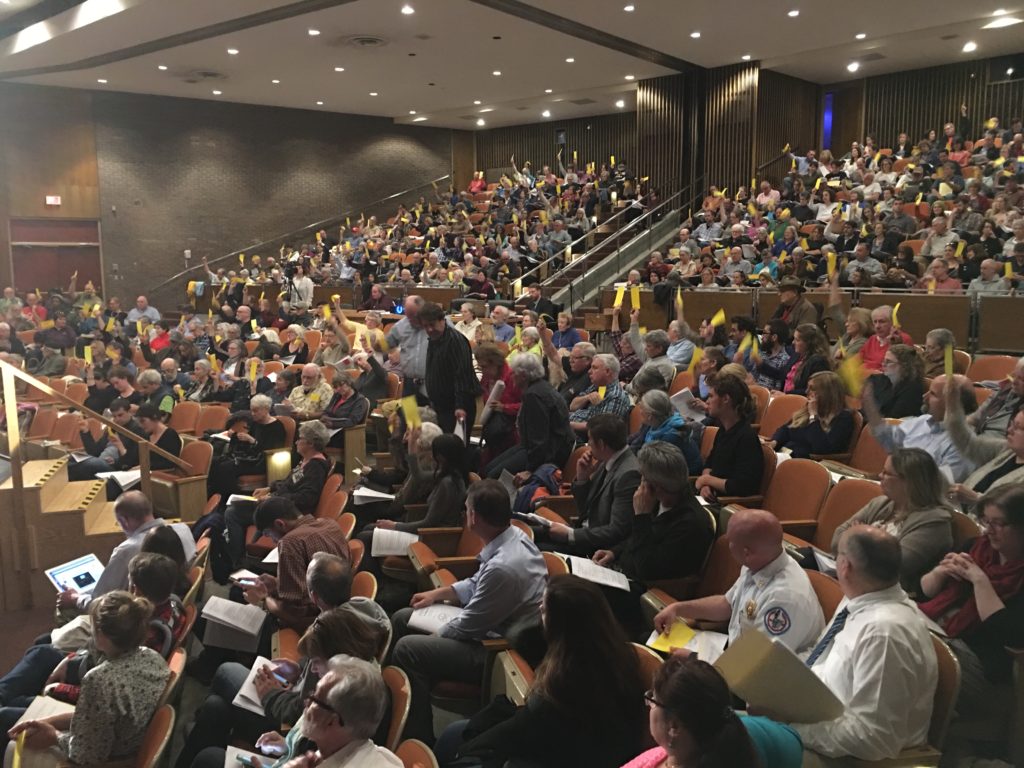 Great Barrington — It’s finally a done deal. After a sustained campaign of several months, Great Barrington residents have joined several other municipalities in the state in declaring their town a so-called sanctuary town for immigrants.

On the warrant for Monday’s annual town meeting was a so-called “trust policy” designating the town “a safe and inclusive community” that will not enforce federal immigration law or “aid in the detention, transfer, transport or deportation of residents for civil immigration purposes.”

The mere announcement by moderator Michael Wise of the motion that the policy be adopted caused loud and spontaneous applause from the 406 voters who packed the Monument Mountain Regional High School auditorium to consider the 28 articles on the warrant. 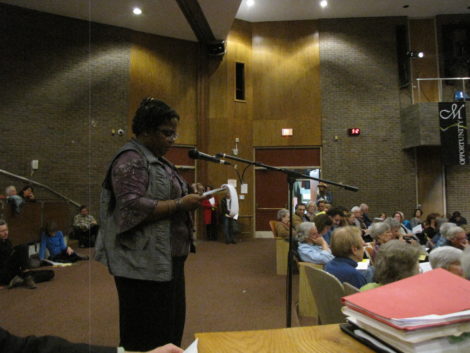 “As a town, if we want a beloved community, we must stand for justice … without attaching difference to privilege,” said Gwendolyn Hampton VanSant of Multicultural Bridge, which had worked with the town to craft an acceptable resolution. (To read the complete text of her statement, see below.)

Van Sant thanked the Selectboard in joining other communities across the state that have adopted the policy. The policy, she said “signifies that we value all” and “it also preserves our local physical resources” and “communicates our diversity.” 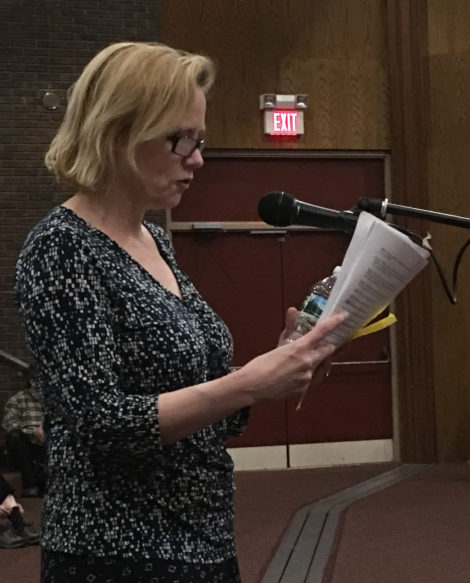 “A community in which any of our members live in fear … is not a community we would want Great Barrington to be,” added Housatonic resident Anne O’Dwyer.

“Living in fear is the not the quality of a welcoming and safe community — it is instead the very essence of a totalitarian state,” O’Dwyer continued. “A community in which any of our members live in fear is not the kind of community that any of us, regardless of political affiliation, I am sure, want Great Barrington to be.” (To read the complete text of her statement, see below).

Lara Setti, a physician at Community Health Programs in Great Barrington and a board member of Multicultural Bridge, spoke of the policy in terms of public health and clarified for the skeptical that the trust policy only pertains to civil immigration policy, which is the exclusive province of the federal government, and not criminal complaints. She added that the trust policy applies not only to immigration status, but also to other residents based on age, disability, ethnicity and the like.

“I see the detriment daily of people living in fear and not accessing medical care,” Setti said. “This article is absolutely essential for the public health of this community.”

School Street resident and trust policy supporter Gabrielle Senza looked at it from a law enforcement point of view, adding that, “When people don’t feel safe in their homes, they need to feel they can call the police.” 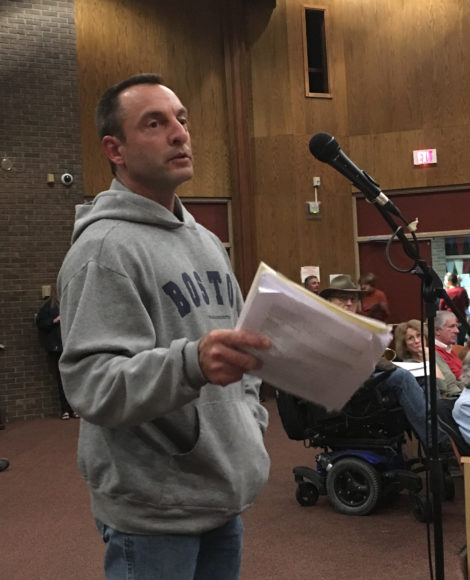 “Berkshire Grown can speak up, while many farms, restaurants and retailers cannot,” Zheutlin said. “So on behalf of our many restaurants, retail and farm members, Berkshire Grown speaks in favor of the trust policy because we’re committed to creating a safer place for all our residents and community members.”

There were a few skeptics of the trust policy in the audience, however. Among them was Steve Farina, who argued that “There’s absolutely no need to put this kind of policy in place … it goes against the rights of people who are here legally.”

Another skeptic, Christopher Tufts, wondered whether the new policy could cause the town to lose some sources of federal funding, as the administration of President Donald Trump has threatened to do.

“Attorney General Jeff Sessions talked about sanctuary cities losing funding,” Tufts said. “Is it wise for us as a community … to go down this path of becoming a sanctuary city and possibly losing federal funding?”

Community organizer and Multicultural BRIDGE staff member Jeffrey Lowenstein said the town could conceivably lose the ability to apply for federal police grants, but in the last fiscal year, they only amounted to $1,952, which he termed a “fairly puny amount of money.”

The town’s new policy, which grew out of a statement drafted by the Selectboard and the police department last fall and adopted by the board, says the department will treat undocumented citizens like everyone else and will not be an arm of ICE (the federal Immigration and Customs Enforcement agency). 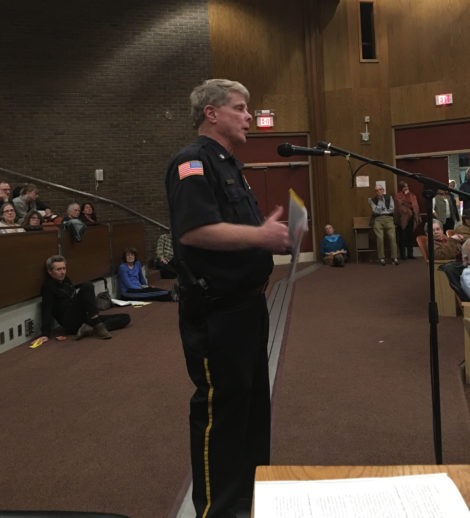 The town of Great Barrington now joins Berkshire County’s two cities, North Adams and Pittsfield, in adopting such policies. Hundreds of other cities, counties and several states have adopted similar policies. Earlier this year, both the Southern Berkshire  and Berkshire Hills  regional school districts adopted like-minded policies as they pertain to their own campuses.

Tufts asked to hear the point of view of law enforcement officials of trust policy. Longtime Police Chief William Walsh told the crowd his department does not get involved in enforcing federal immigration law. He said he had met with a group of supporters of the policy and “overall we’re okay with this policy.”

“If there’s a really bad guy in town, we have the tools to address that,” Walsh explained. “ICE can do what they want to do … If it’s a really bad actor, they will make the decision to come up and remove that person.”

In the end, the motion to approve the policy passed by a show of hands so overwhelming that it did not require a count. The approval was followed by a round of shouting and applause that was near deafening

First, I want to thank the Selectboard for the initiative in joining communities across the Commonwealth in the Sanctuary Resolution. This signifies that you value all of our new residents and invite the rest of our Great Barrington community to join you.

As a town, we continue to lead our county by being the first accredited police department of the Berkshires, and your commitment to building relationships through community policing is something we can all be proud of.

This proposed Trust Policy preserves a clear path to keep our communities safe by enacting a specific protocol. We all share the principles of wanting to ensure trust and safety for all residents and their families in Great Barrington that consider our town their home, place of work, recreation and worship.

Our Trust Policy ensures civil liberties, builds transparency and ensures justice. We are focused on promoting inclusivity – safety from retaliation, harm or threats of danger. The Trust Policy also preserves our local fiscal resources to protect our local civil and human rights and communicates our commitment to embracing diversity and social justice. Concrete steps in the Trust Policy are outlined that we can take together in collaboration among residents, town staff and police. In the words of Bell Hooks: “If we want a beloved community, we must stand for justice, have recognition for difference without attaching difference to privilege.”

Our positive vote is for taking a stand together for trust and safety for our diverse Great Barrington population.

On behalf of Multicultural BRIDGE, thank you.

I am grateful to the Selectboard, Multicultural BRIDGE, and the Police Department, who worked together to articulate this resolution for a Safe and Inclusive Community.

The great strength of this resolution is, of course, that it is the product of a collaborative effort of these organizations within our town. But it is also of great importance in that it enables our town and those in the town charged with protecting us – to do just that: protect and serve us in the way we have charged them to do: to protect all members of our community.

Great Barrington has long been a place where immigrants have come to find a new and better life. Yet, as we all know, recent federal executive orders have been issued that are intended to intimidate, threaten and target immigrants – and they have created a great deal of fear nationwide, as well as in our Great Barrington community.

Many of us find ourselves afraid– some for our own safety, but also often for the safety of our families, our parents, our children, our friends, our neighbors, our co-workers, and our students.

Living in fear is the not the quality of a welcoming and safe community—it is instead the very essence of a totalitarian state. A community in which any of our members live in fear is not the kind of community that any of us, regardless of political affiliation, I am sure, want Great Barrington to be.

Thus, I am so proud that with this Article, Great Barrington would be joining with the many towns and cities in Massachusetts that have already adopted such policies, as well as the 5 states, more than 100 cities and 600 counties nationwide that also have such policies in place.

It is time that we all take a stand for all of the underrepresented groups in our community, and those who are the most vulnerable. What affects one of us, affects us all.

This a moment for us to be quite clear in our commitment to being a trusting, welcoming and safe community… and vote to support this Article– to designate Great Barrington a Safe and Inclusive Community with Trust Policy Principles and Protocols in place. 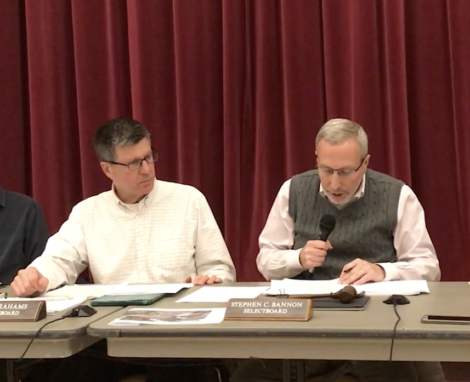