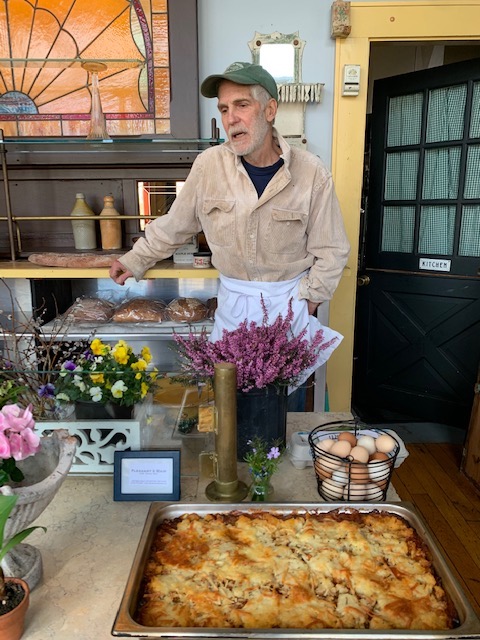 Craig Bero, owner and chef at Pleasant and Main in Housatonic, grew up on a farm in northern Wisconsin, and spent 30 years in the restaurant business in Manhattan. He can’t remember exactly when he moved up to the Berkshires full-time, though he thinks it was three or four years ago.

Until about a month ago, Bero ran his cozy, antique-filled establishment set right at the juncture of the two streets, with a view east toward Flag Rock, like Cheers, where regulars knew everyone’s names and the décor might put you in mind of your grandmother’s living room. Now the restaurant is command central and he’s gone into full-on emergency feeding mode, cooking about a dozen three-course meals a night for $12 a plate, $15 for Passover and Easter.

He still has help from his long-time cook on weekends, but other than that, he’s a one-man band, closed only on Mondays.

It would certainly seem that crisis energizes Bero, by nature a man of considerable energy. On day one of the shutdown, he “gutted” his restaurant’s foyer and transformed it into his to-go way station, from which he starts serving customers dinner around five, their covered plate delivered straight to their car window. (Bero says he follows all the newly established hygiene and sanitation rules for take-out establishments.) When he’s not cooking, he’s taking or fulfilling orders, accepting donations of food and money; he can be found foraging in the wild. Most nights find him out on some hill or creekside or other, looking for watercress or ramps or mustard greens.

He’s also got an eye for inedible goodies, and he’s decorated a new outdoor courtyard with salvaged stone, wood, vases and fireplaces. When he drove through Great Barrington and Stockbridge at midnight on a recent night, he was surprised to find no lights on all the way down either Main Street. Apparently, the rest of us are, disappointingly, not so energized.

In Bero’s former life, his urban foraging for stuff to eat and stuff to save was featured in a 2007 New York Times article titled “Downtown, Scavenging for Castoffs” about his then new establishment, The Soda Shop. Bero actually ran several places in the city, including Anglers and Writers and the Cosmopolitan Café. And he is no stranger to crisis, with the cataclysm of 9/11 forcing the shutdown of Anglers and Writers, and sparking the opening of the Cosmopolitan in Tribeca. He says that after Hurricane Sandy struck downtown Manhattan in 2012, his was the only place open in the neighborhood, and Mayor Bloomberg gave him an award for providing that crucial community service.

For some locals nowadays in Housatonic, Bero has taken on a similar role, as they’ve come to depend on Pleasant and Main for most every dinner, and if they can’t come up with $12, they give what they can. He has a dozen or so regulars, including one bespectacled gentleman who stopped by during my visit to return last night’s dinner plate, greeting Bero with, “I’m a little early. Just gotta wait for my next meal.” His car was full of empty bags from McDonalds. He sheepishly acknowledged, “I don’t eat healthy, normally.”

Our new normal, via Pleasant and Main, has introduced fresh vegetables and home-cooking into his diet. Friday night’s dinner brought in 14 more far-flung customers, from North Adams, Pittsfield, Monterey, New Marlborough, Hillsdale and Egremont as well as Housatonic. Says Bero, “It makes me proud, as a restaurateur, that I started the day this broke. I knew I had to find a way to survive.”

Generosity begets gratitude and generosity, and Bero’s workspace is taken up with thank-you notes and cards, and food preparation and service areas are filled with items donated by local business owners. Half a dozen bread loaves donated by a baker at Berkshire Mountain Bakery line one wall of the reconfigured foyer. In the kitchen there are gallons of maple syrup from Al Hanson (“won’t take a dime”), a selectman in Richmond, huge amounts of purple seed stock potatoes from Judy at Honey Dog Farm in Hillsdale, N.Y., and in the courtyard bundles of end cuts of cherry and applewood from RK Woodworkers down the street, with which he starts cooking his briskets and salmons. (“They drop stuff off whenever I tell them I’m running low.”) A Wisconsin friend he hasn’t seen in 30 years just sent him pounds of fresh salmon for his seafood pot pies, and just to brighten his day his high school girlfriend sent a care package of maple-glazed sugar cookies.

But Bero doesn’t mince words when it comes to businesses that have taken this moment of crisis to increase their prices. “Four forty-nine for a dozen of your cheapest eggs? That’s just not right. You should be selling them at cost.”

Bero had a long wait list for Easter dinners this weekend, and made one family’s Passover, with a four-course meal for five on Friday. He spent the day preparing his own gefilte fish and matzo balls, and the family contributed $10 per plate over and above his $15 a person charge.

Whatever money comes in is immediately put to work to buy food for the next meal.

“It’s not living week-to-week or day-by-day. I have to make decisions minute-to-minute.” But Bero seems to be thriving within that sped-up timeline, and living on the spirit of giving and grace that he’s inspired. “I can’t wait until this is over, so I can just throw a dinner in the backyard and say thank you to everybody.”