By 1 vote, Sheffield returns to an appointed Finance Committee 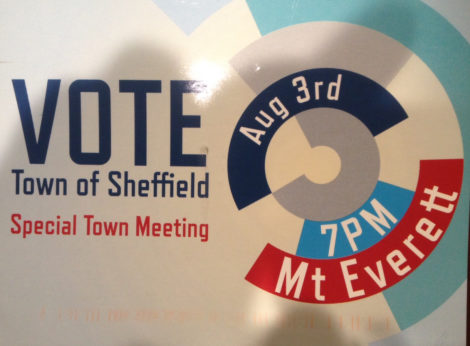 The face of a postcard sent out by an unidentified group seeking to overturn the May 4 annual town meeting vote that established an elected Finance Committee.

Sheffield — A change in the town bylaws to make the Finance Committee an elected office rather than an appointment of the Board of Selectmen and the town moderator, approved by two votes at the May Town Meeting, was rescinded last night (August 3) at a special town meeting by just one vote.

The vote was 134-133. The vote at the May meeting was 108-106. There are roughly 2,200 registered voters in Sheffield, according to Selectboard Chair Nadine Hawver.

Moderator Bruce Person opened the meeting at the Mt. Everett Regional High School auditorium, presided over three votes on routine matters, and then handed over his gavel to Robert Weitz, a former moderator. This was proper, as the meeting was debating the duties and powers of the moderator’s office.

Weitz ran a tight meeting, holding speakers to their allotted time and calling them out of order if they made arguments he did not consider germane to the subject. This was the fate of Christine Valentini, who began a long prepared speech by saying opposition to an elected Finance Committee was “driven by fear, fear of change.”

“Please confine yourself to the facts,” Weitz said, as a significant number of voters hissed their disapproval.

Proponents of the way it has been done in Sheffield since 1947, including Moderator Person who spoke from the floor, said an appointed Finance Committee is good for the town. There is a dearth of people with the expertise to serve on the Finance Committee, and an elective system doesn’t necessarily encourage the best candidates and can lead to a “personality contest,” which is not of benefit to good government. He pointed out that only 27 out of 351 Massachusetts towns elect their Finance Committee. (Great Barrington has an elected Finance Committee.)

Longtime former Police Chief Jim McGarry said the vetting process by the Select Board and the Moderator ensures that only qualified candidates are appointed, and good prospective volunteers might be scared off if they had to run for election. Select Board Chair Hawver said she was concerned that expanding the scope of the Finance Committee’s responsibilities, as the now defunct Article 11 would have done, would cause it to infringe on the budget setting powers of the Select Board, leading to conflict. “We don’t need any more of that.”

Sarah Siket said she had the greatest respect for the current Finance Committee and hoped they would all run for election. If nobody else stepped up, she said, they’d win unopposed. “Why wouldn’t we put it to a vote?” she said. It’s about “transparency” in town government.

Rene Wood, who passed out a handout making the argument for Article 11, said she was “saddened by the lack of respect for individual citizens,” and lamented that by making the debate about the current members of the Finance Committee, the opponents had created exactly the kind of “personality contest” they claimed to deplore and diverted attention from the true purpose of the article, which was to rationalize the budget process and expand the Finance Committee’s role in it.

“The Finance Committee is an advisory board,” said Mark Bachetti. “I prefer to choose my own advisors rather than have them chosen for me by three people.” 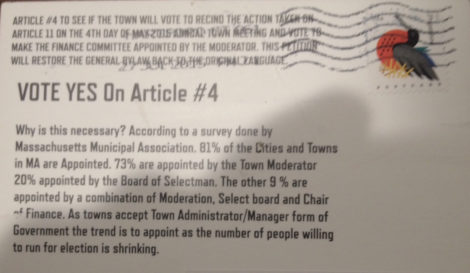 The back of the postcard urging the approval of an appointed rather than elected Finance Committee.

Amy Wright denounced the effort to overturn the town meeting vote. “It’s been less than two months since the people spoke. Rather than give it a chance to work, you want to overturn it….You’re trying to stifle our voices.”

Jeff Lowenstein called the question and the vote was by secret ballot.

The name on the signature petition to put the question on the special town meeting ballot was Nat Patkin, who did not speak at the meeting, Moderator Person said at the break. “At the May meeting there was a contentious debate about a shooting range, and when that ended a lot of people left before Article 11 came up, so the vote went 108-106,” he said.

Opponents of Article 11 sent a postcard to voters in advance of the meeting, making the argument that fewer towns elect their Finance Committee. The postcard does not bear the name of any group registered with the Secretary of State as state law requires for any mailing seeking to influence the outcome of a vote.

The recipient of that postcard, Adam Kerzner, said he did not think this would be the last time the voters of Sheffield considered this particular question. “I think this vote was part of a larger ongoing struggle in Sheffield … a power struggle that seems to go beyond any single issue.”