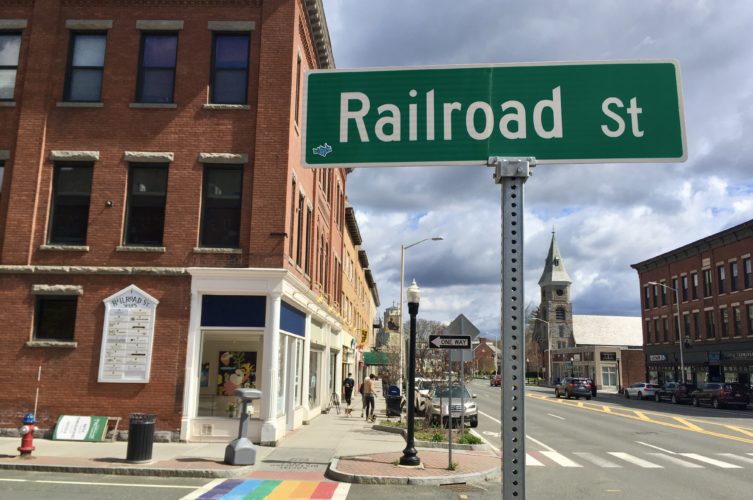 The corner of Railroad and Main, the center of Great Barrington's shopping district. Photo: Julia Dixon

As much as brick-and-mortar businesses have been decimated by the coronavirus pandemic, downtown Great Barrington has weathered the storm.

That’s not to say that there have not been losses.

Church Street Trading Co. and The Gifted Child, both of which have been mainstays of Railroad Street for 28 years, closed their doors last month.

Over 8,500 retail businesses shuttered in 2020 according to Coresight Research, with another 10,000 stores predicted to close in 2021 as retailers collapse under lease pressures and consumers continue shopping online. Many businesses that remain open have a lot of financial ground to recover.

Despite periods of market challenges and economic downturns, downtown Great Barrington has maintained a flourishing, resilient retail and restaurant community.

“There are two things that are needed to ensure vibrancy in a downtown,” said Robin Helfand, Community Development Corporation of South Berkshire (CDCSB) board member and owner of Robin’s Candy, a staple of Main Street since 2007. “Walkability, or the ability to park your car and move around, and anchors—a reason to come to town.” Great Barrington has both.

“My typical customer is ‘batching,’” she said. “They visit a doctor or lawyer first, come downstairs and explore street-level retail, visit me or SoCo Creamery for a treat, have dinner on Railroad Street, and stay for a show [at the Triplex Cinema or the Mahaiwe].”

Helfand also credits diverse types of downtown commercial ownership, from large developers to individual building owners, as well as their willingness to create a welcoming business environment, particularly this past year.

“I applaud all the landlords who have been flexible and forward-thinking to keep spaces open using pop-ups or month-to-month leases,” she said. “Pop-ups aren’t typical here; most of our storefronts have not seen empty space. [Pop-ups] are of economic necessity.”

Andrea Westerlind embraced the pop-up model for her retail store in Great Barrington, although out of opportunity more than necessity.

She relocated the headquarters of her multi-brand outdoor apparel and gear company Westerlind from New York City to Millerton, New York, in July 2020 after her pop-up store there did well. Once she bought a house in Ashley Falls, she started going to Great Barrington for errands and saw the need for a “cool fashion outdoor shop” in town.

“Building a permanent location is a huge investment,” said Westerlind, who operates retail stores in Manhattan and Eden, Utah. “You want to know you have support and interest from the community, so dating before you get married is always a good idea.”

She set up a pop-up in one half of the former Iredale Mineral Cosmetics storefront at the corner of Railroad and Main Streets this January, typically the worst time of year for retail, she said, as well as the height of the COVID-19 pandemic, but sales were strong.

“COVID has pushed people to invest in a really good pair of hiking boots instead of a pair of high heels,” she said. “People are consuming in a different way and that has been really good for us.

As was the case in Millerton, Westerlind found a customer base in Great Barrington of active, healthy residents with disposable income who value the outdoors, sports, and style. “We hit the right market,” she said.

Westerlind is not the only new business to fill a recently emptied downtown storefront space at this particularly volatile time for retail. twoflower, a café and bakery, opened this February at 34 Railroad Street—the former site of the restaurant Botanica—and Dèpart Wine will open this summer at 28 Railroad Street, the storefront vacated by The Gifted Child in March.

Established businesses are also taking advantage of storefront vacancies to move to bigger or more visible locations. Bernay Fine Art, which opened on Stockbridge Road in 2019, relocated in February to 296 Main Street, the other half of the former Iredale outlet, and griffin bounced from space to space before landing at 4 Railroad Street, the longtime location of Church Street Trading Co.

Connie Griffin moved to the Berkshires from New York City with her husband 11 years ago and built griffin, a new and vintage clothing and home goods store, from scratch. She first opened on upper Main Street in Great Barrington, but it took time to afford the higher rents that spaces closer to the downtown center demand.

“People are drawn to this little block—it’s the focus of the town,” she said of Railroad Street. Now, Griffin’s business is in what she considers to be a premier storefront and, with a freshly signed four-year lease, she hopes to stay there for a while.

“The space came available quickly and Hillary [Rush, owner of Church Street Trading Co.] and landlords Bev and Kim Kimball bent over backwards to get us here,” she said. “It was such a community, neighborly negotiation.”

Griffin never launched her business with a pop-up, but she believes that it’s a better model for artists and entrepreneurs with an established company or product line. For Workshop, it presented the perfect solution to a pandemic-induced challenge.

Textile artist Jamie Goldenberg had already been thinking about opening a showroom or retail space where she could sell rugs, pillows, and wall hangings directly to clients. But as in-person holiday fairs were abruptly canceled last year, she approached friends Ben Krupka, a ceramicist, and Molly De St Andre, a printer and designer, about trying a pop-up together.

“It was an experiment,” said Goldenberg, “but it felt like it was something that was possible.”

Several landlords were willing to rent the trio temporary space in Great Barrington but they chose 25 Railroad Street, a popular gallery space that once housed Lauren Clark Fine Art and Iris Gallery of Fine Art. They formalized the cooperative, added several members, and opened on November 1, 2020 with the intention of closing after the holiday season.

“We had a great November and December which was surprising considering it was the height of the pandemic,” said member Kris Kanter, co-owner of JK Custom Furniture and Design and secretary of Workshop’s board. “There were days where people were waiting outside to get in because we were at capacity,” added Goldenberg.

Now with eight members and steady sales, the temporary nature of the store has changed. “[We have] such wonderful landlords who were excited to see our project succeed, we decided to stay,” Kanter said. Like Westerlind, Workshop has extended its lease through December 2021.

“Pop-ups present a greater ability to test a business concept in a lower risk manner,” said Robin Helfand. “They allow people to try it, tweak it, and launch a business successfully.”

Helfand is one of several local business owners and residents who, along with the CDCSB and the town, are looking for new ways to support entrepreneurs, including connecting them with landlords or other community resources through a new program called Entrepreneurs Forums.

Launched in tandem with the Welcome Project, the forums are monthly meetings, currently taking place via Zoom, featuring guest speakers and topical conversations that are, as Helfand put it, “productive and solution-oriented.” What started as a test call in January with 12 new residents has become a group of over 50 business owners who share ideas and network.

“It’s a great place for people who just moved here and have good ideas to make connections with those who have been here for decades and have established businesses,” said Chris Rembold, Great Barrington town planner and assistant town manager. “You can’t help but feel energized.”

The May Entrepreneurs Forum will focus on the CDCSB’s Small Business Technical Assistance Program, and the June program will be geared towards the agriculture, food production, sustainability, and up-cycling industries.

“The town’s tried to make the most of the pandemic and embrace new ideas,” said Rembold. “But small stores like Robin’s are the ones who make the downtown thrive. That’s one of the things that makes our retail so successful.”

Great Barrington’s Entrepreneurs Forums are held the second Wednesday of every month from 10:30am to 11:30am. Email robin@robinscandy.com and type “Entrepreneurs Forum” in the subject line to participate or find out more.