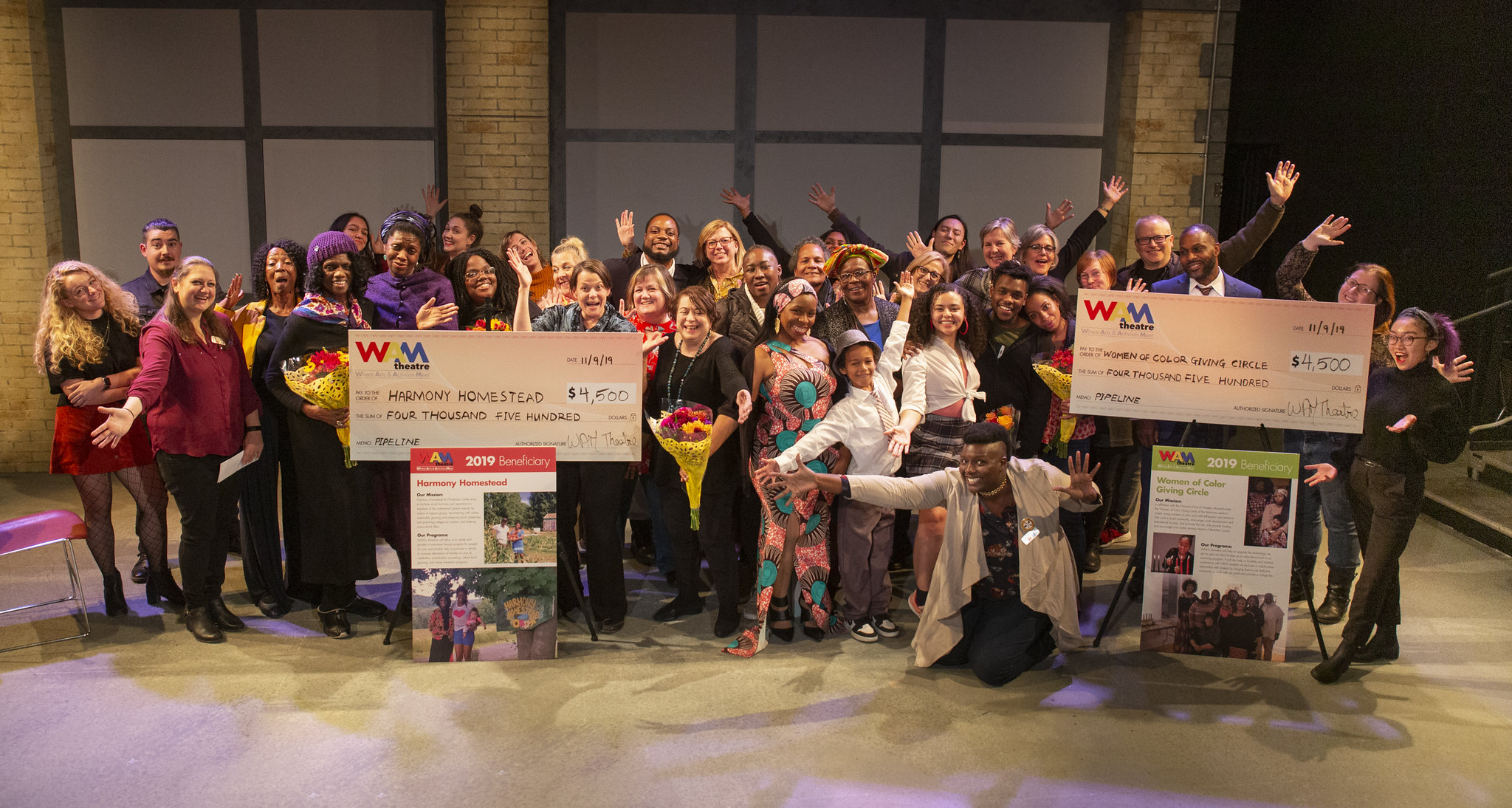 WAM Theatre present two checks for $4,500 each to Harmony Homestead & Wholeness Center Inc. and the Women of Color Giving Circle after the final Nov. 9 performance of 'Pipeline' at Shakespeare & Company in Lenox. Photo: David Dashiell

Lenox — In keeping with it’s philanthropic mission of donating a portion of box office proceeds to agencies that benefit women and girls, the success of the just-closed production of “Pipeline” by Dominique Morisseau enabled WAM Theatre to present $4,500 each to the beneficiaries Harmony Homestead & Wholeness Center and the Women of Color Giving Circle. This brings WAM’s donation total since its founding in 2010 to $75,000.

The 2019 beneficiaries were chosen after a thoughtful and rigorous selection process, including a request for proposals and site visits, overseen by a committee consisting of WAM producing artistic director Kristen van Ginhoven, Margaret Fluhr and Wendy Healey of WAM’s board of directors, WAM general manager Dori Parkman, and WAM associate producing director Lia Russell-Self. Stephanie Wright of Multicultural BRIDGE joined the committee this year as part of the WAM/BRIDGE partnership on “Pipeline.”

An important component of the WAM/BRIDGE partnership was creating a sense of engagement and place for the artists and production team. BRIDGE founder and CEO Gwendolyn VanSant coached the WAM team in equity and inclusion practices; consulted in design of curriculum, study guide and playbill; participated in auditions and designed a supplemental talkback to support audiences and panelists. Community development workshops designed and taught by Russell-Self and VanSant were presented in multiple professional development and public events across Berkshire County to extend the opportunity for learning. A series of post-show conversations offered audience members the opportunity to engage with artists involved in the production and with speakers including “Unconscious Bias in Schools” author Tracey Benson, Ed. L.D.; Berkshire County District Attorney Andrea Harrington; Berkshire County District Attorney’s office community engagement coordinator Bryan House; and NAACP Berkshire County Branch President Dennis Powell.

After the Nov. 9 closing performance, there was a chance to meet representatives of Harmony Homestead and the Women of Color Giving Circle and hear more about how WAM’s donations will impact their work. The conversation was followed by the check presentation ceremony.

North Adams — For the second year in a row, a report from the Eos Foundation examining gender equality in Massachusetts colleges and universities has identified Massachusetts College of Liberal Arts as the top four-year public institution among only 40% of schools to achieve gender equality.

The report, titled “Women’s Power Gap in Higher Education,” examines the percentage of women enrolled at all Massachusetts public and private schools alongside the percentage of female college presidents, senior leadership and boards of trustees. Of 92 schools, only 37 were ranked as “satisfactory.”

MCLA’s student enrollment is 62 percent women; the college’s highest-salaried employees are 50 percent female; 50 percent of the college’s board of trustees are women, including the board chair; and MCLA counts two past female presidents. MCLA boasts a 60% female full-time tenure-track faculty in the fields of biology, chemistry, physics, environmental science and math. In 2018, MCLA earned an “A” from the Tucker Center for Girls & Women in Sport for having 100 percent of its female teams led by women head coaches.

Among student support services, the college has maintained the Susan B. Anthony Women’s Center for more than 20 years, in addition to the MCLA Identity and Gender Equality Resource Center and Multicultural Center. MCLA also has student-led Men of Color and Women of Color initiatives supported by faculty and staff advisors. MCLA also offers an 18-credit Women’s, Gender and Sexuality Studies minor. Students working with volunteer services on campus volunteer and raise money for local women’s centers and other causes; and faculty, staff and administrators help students mark important days of awareness such as Take Back the Night.

Presenter John Fiorello of the Entrepreneurial Center of Northwest Connecticut is an adjunct business development instructor for Northwestern Connecticut Community College and startup mentor for early-stage businesses in the region, serving for-profit and nonprofit entrepreneurs. He is also the founder of RecordME.co, a startup changing the way music and other content is delivered to fans. With a background in music, touring, production and recording, he previously co-founded the John Samuel Group with his wife, Karie.

The seminar is free and open to the public. Reservations are suggested but not required. For more information or to reserve a spot, contact Genia Wilson at (860) 453-3496 or evwilson@salisburybank.com and type “Business” in the subject line.

Stockbridge — The Stockbridge Chamber of Commerce is looking for volunteers to participate in holiday house tours as part of its 30th annual Stockbridge Main Street at Christmas event. The tours are scheduled for Saturday, Dec. 7, from 11 a.m. to 4: p.m. Volunteers will be given information by the property owners and will be assisting them in showing the homes to interested visitors. Volunteers will not be giving tours, but will be act as greeters, extra security, etc. The properties featured on the tour this year are Seven Hills Inn, the Old Corner House, Naumkeag, the Kniffen House, West Stockbridge Congregational Church, Old Town Hall and the Stockbridge Country Inn.

Each volunteer will be offered a complimentary ticket to view the other properties either before or after their shift. For more information, contact Barbara Zanetti at (413) 298-5200 or info@stockbridgechamber.org by Friday, Nov. 15.

Given through the Exit Planning Institute, the CEPA program was designed for business advisors who work closely with owners of privately held companies. To receive the designation, Russo completed a four-day program that included 100 hours of pre-course study, 30 hours of classroom instruction, and the successful completion of a three-hour exam. She is one of the youngest advisors to earn this designation.