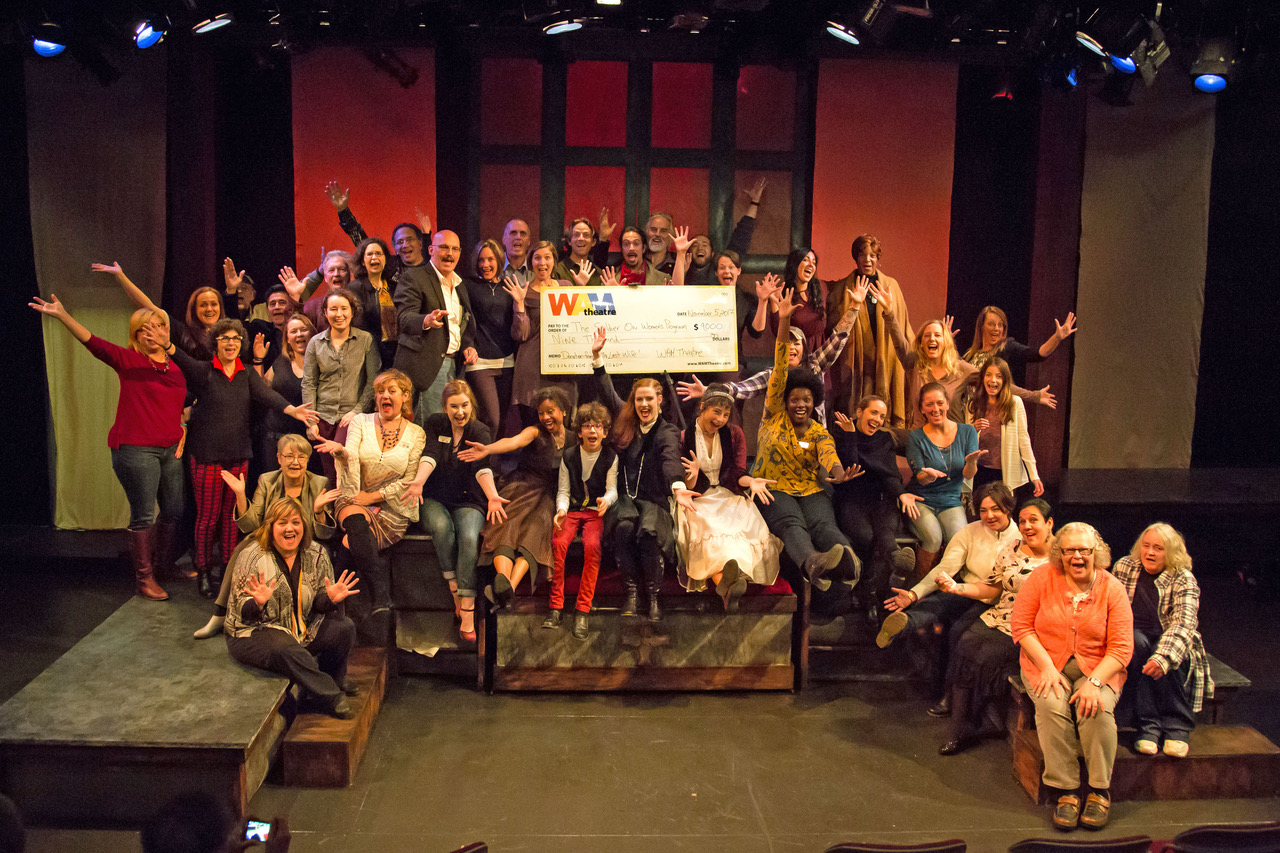 WAM Theatre presented a check for $9,000 to the Soldier On women's program at its Nov. 5 closing performance of 'The Last Wife' by Kate Hennig at Shakespeare & Company in Lenox. Photo courtesy WAM Theatre

Lenox — Every year WAM Theatre donates a portion of the box office proceeds from its fall main stage production to an agency that benefits women and girls. The success of WAM Theatre’s production of “The Last Wife” by Kate Hennig enabled the company to present it largest donation ever to a single beneficiary: $9,000 to the Soldier On women’s program. The check presentation to the beneficiary was made following the sold-out closing performance Nov. 5 at Shakespeare & Company.

WAM Theatre’s donation will support care during the transition to independent or family life for the formerly homeless female veterans in residence at the Soldier On women’s program.

Since its founding in 2010, WAM Theatre has now donated more than $41,500 to thirteen nonprofit organizations.

Lee — When the Price Chopper supermarket closed July 29, it cut off access to food for some of Lee’s most vulnerable populations including seniors, immigrants and those living in subsidized housing. Residents of Lee have been working with Berkshire Interfaith Organizing since before the closing to try to secure adequate transportation to food for affected residents and by working to find a new grocery store for the former Price Chopper location.

The organizing team reached out to the Golub Corporation and confirmed that it is willing to consider offers from food retailers for the property. With the confirmation in place, the team worked to identify the best replacement grocery stores and has settled on ALDI as its top choice, with Price Rite as its second choice. Residents are working to contact the stores directly to ask them to consider opening a store in the former Price Chopper location, and are gathering single-sheet petitions from across the county to demonstrate support for a new store. For more information, contact Jeff Lowenstein at (413) 854-3491 or jeff@biorganizing.org.

Williamstown — The Williams College Museum of Art will add works by Robert Selden Duncanson, James Van Der Zee, Sam Gilliam and Maren Hassinger to its collection. The acquisitions are made possible by a major monetary gift from Clarence Otis of the Williams College class of 1977, and his wife, Jacqui Bradley. The Otis Family Acquisition Trust is earmarked exclusively for acquiring works of art by African-American artists.

Over the last year and a half the Otis gift has supported four pivotal acquisitions of works of painting, sculpture, and photography spanning the mid-19th century to the 1970s. The first is an oil painting by Duncanson of the Hudson River School. In February 2018, WCMA will debut “Situation VI–Pisces 4,” c. 1972, by Gilliam. “Walking,” 1978, is comprised of 148 2-foot-high bundles of wire-rope strands and is a signature installation work by multimedia artist Hassinger. The most recent Otis fund acquisition is a portfolio of 18 photographs by Van Der Zee.

“This truly game-changing gift by Clarence Otis and Jacqui Bradley has made it possible for us to significantly augment the museum’s holdings in this critical area, one to which WCMA has had a longstanding commitment, both in our collecting priorities and exhibitions and programs,” said WCMA’s interim director Lisa Dorin. “We are deeply grateful that our goals in highlighting and supporting work by black artists so closely aligned with those of the Otis family.”

Pittsfield — Berkshire Children & Families has received a grant from the Feigenbaum Foundation in the amount of $20,000, to support its Kids 4 Harmony afterschool music program. Established in 2012 and inspired by Venezuela’s El Sistema movement, Kids 4 Harmony offers free, intensive classical music instruction to children and youth from under-resourced communities. Originally installed at Morningside Community School, Kids 4 Harmony now also operates at Brayton Elementary School in North Adams. The grant will allow Kids 4 Harmony to open opportunities for children to grow their academic skills, self confidence, discipline and citizenship as well as widening their aspirations through music and building community.

Williamstown — The Creating Connections Consortium has received a $5.5 million dollar grant from the Andrew W. Mellon Foundation to fund tenure-track positions in the humanities at Williams College and 27 other American liberal arts colleges.

The five-year grant will help Williams and other participating colleges accelerate their efforts to diversify their faculty. By including a range of member schools from the Liberal Arts Diversity Officers consortium, the grant will also broaden C3’s reach beyond its lead liberal arts colleges.

The grant replaces the consortium’s Postdoctoral Fellows program with C3 professorships that will offer up to two years of funding for tenure-track positions in the humanities. A minimum of 16 such positions will be allocated across the participating schools.  The new grant will also fund the New Scholar Series, departmental events that bring emerging scholars from underrepresented populations to participating campuses to speak about new and developing areas of their disciplines.