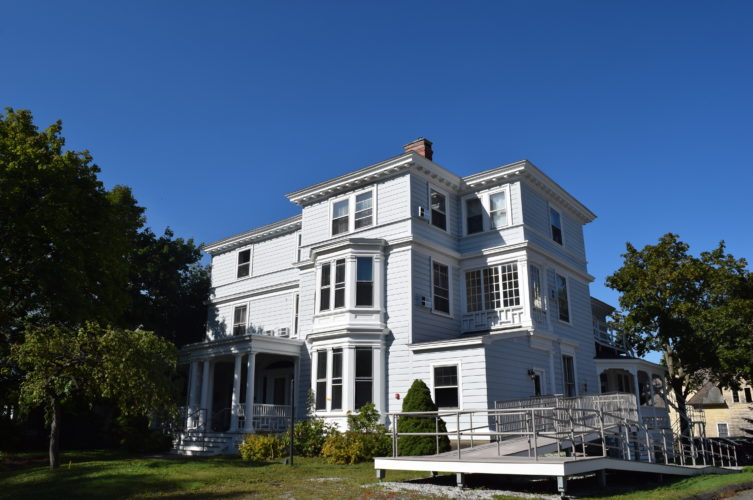 BTG bought the Thaddeus Clapp House in 2013 to serve as actor housing. Major funding for the restoration was provided by the Massachusetts Cultural Facilities Fund. BTG acknowledges Allegrone Construction, which served as general contractor for the restoration project; and Wayfair and the Annie Selke Companies for their sponsorships of furniture and interior décor. The house will also be available to rent for small to mid-sized events.

In western Massachusetts, Thaddeus Clapp I served as treasurer and justice of the peace for his town, and went on to become a delegate to the Constitutional Convention for Massachusetts. One of his children, Thaddeus II, who would become Col. Thaddeus Clapp, moved to Pittsfield in 1816. Shortly after Col. Clapp retired as superintendent of the Pontoosuc Woolen Manufacturing Company, the Thaddeus Clapp House was built and purchased in 1871. His son, Thaddeus Clapp III, and other Clapp family members contributed to the economy of Pittsfield in the late 1800s and early 1900s. BTG’s restoration of the Clapp House preserves the exterior Italianate style, as well as the interior Arts and Crafts style.

The event is free and open to the public. For more information, contact Berkshire Theatre Group at (413) 997-4444.

Pittsfield — The Berkshire County Board of Realtors will hold the second annual Berkshire Housing Summit Wednesday, Oct. 16, at 4 p.m. at the Berkshire Hills Country Club.

The keynote speaker will be Christopher Coes, vice president of land use and development at Smart Growth America in Washington, D.C. For the past nine years, he has advised cities throughout the nation on community revitalization as well as sustainable and equitable economic development. He has also facilitated numerous deal-making opportunities that have produced over $1 billion in new smart growth real estate deals.

Also speaking will be public policy analyst Amy Dain, who has spent 20 years working on state and local policy issues in Massachusetts. Notably, she wrote “Housing and Land Use Policy in Massachusetts: Reforms for Affordability, Sustainability and Superior Design”; and organized StatNet, a network of city and town managers who meet to learn from each other about data-driven decision-making; and recently created an intensive multifamily housing study for the Massachusetts Smart Growth Alliance. She will bring Berkshire County-specific data to the summit.

The event is free and open to the public. Those attending are asked to register in advance for seating and handouts. For more information, contact the Berkshire County Board of Realtors at (413) 442-8049.

Gutschenritter served most recently as interim CEO; she was on the board for 16 years, including as its chair. A graduate of Tufts University, she earned her MBA from Bentley University. She enjoyed a successful career in financial services, including as head of global client relations for SIX Securities Services and as senior vice president, global operations at State Street. In addition to her volunteer leadership roles with Becket-Chimney Corners YMCA, Gutschenritter is currently on the Boston advisory board for the Posse Foundation.

Downtown Pittsfield trick or treat to include 36 locations

The event is free and open to the public. Candy is donated by the 36 participating venues as well as event sponsors the Outlet at Pine Cone Hill and BJ’s Wholesale Club. Children must be accompanied by a parent or guardian during the event. For more information, contact Downtown Pittsfield Inc. at (413) 443-6501 or info@downtownpittsfield.com.

Pittsfield — Berkshire Community College has announced the hiring of new faculty and staff on campus as well as new titles for other current staff.

Maryann Carnes has been hired as an assistant professor of nursing. Carnes recently retired from the U.S. Department of Veterans Affairs where she worked as the risk manager and subsequently as the diabetes educator and program manager of care coordination and telehealth. She also has previously worked as an adjunct nursing instructor at BCC and has an associate degree in nursing from BCC, a Bachelor of Science in psychology from Elms College, and a Master of Science in nursing from the University of Phoenix.

Sarah Polo has been hired as an associate professor of nursing, and she currently works as an IV therapist at Berkshire Medical Center. Polo lives in Pittsfield and has associate degrees from BCC in theater and nursing, a bachelor’s degree in education from SUNY Albany, and a Master of Science in nursing leadership from Walden University.

Amanda Osgood has been hired as the assistant professor of nursing. She previously worked at BMC for 18 years in a variety of nursing roles. She also works for Berkshire Health Systems as an instructor for the certified nursing assistant program. Amanda lives in Pittsfield and holds an associate degree in nursing degree from BCC and a Bachelor of Science in nursing from University of Phoenix.

Karen Hines has been hired as an associate professor of business. She previously worked at Holyoke Community College. Hines lives in Lee and holds a Bachelor of Science from Albright College in Reading, Pennsylvania, where she majored in marketing with a minor in communications, and a Master of Business Administration from American International College. In addition to teaching, Hines speaks at national conferences about the use of open educational resources.

Andy Ottoson has been hired as the new administrative assistant to the Osher Lifelong Learning Institute at BCC. He previously worked for NADAP, a social services agency contracted by New York City’s human resources administration to connect public assistant applicants and recipients to treatment services for substance use disorders, and as a freelance director/producer/stage manager in theater and opera. He lives in Pittsfield and holds a Bachelor of Arts in theater from Webster University in St. Louis.

Joshua Costa has been hired as the institutional security officer III. Previously, he worked as the college’s facilities/evening crew leader. He is a graduate of the New Hampshire part-time police academy class and the New Hampshire Campus Safety Academy class. Costa is also a certified mental health worker issued by New Hampshire State Hospital. He is currently working on completing his associate degree in criminal justice at Eastern Gateway Community College.

Recent BCC graduate Alicia Starsja, who earned an associate degree in social work, has accepted the position of program assistant for TRIO. Starsja brings three years of TRIO experience and national certification as a domestic violence and sexual assault counselor. She is studying to earn her bachelor’s degree in social work at Elms College.