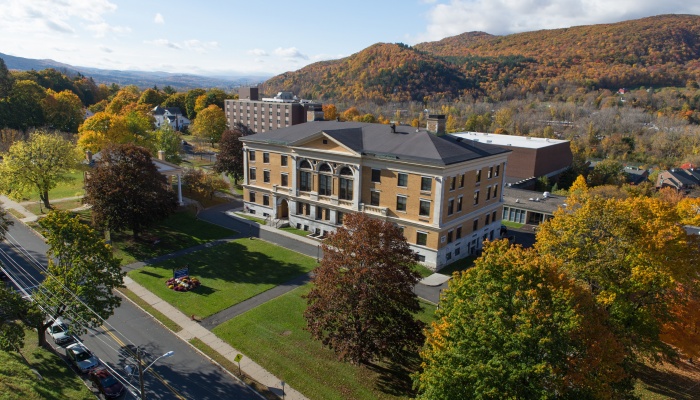 North Adams — Massachusetts College of Liberal Arts has announced that it has been named one of U.S. News and World Report’s “Top Public Schools” in the U.S. MCLA President James F. Birge credited MCLA’s faculty, academic rigor and fiscal stewardship as major reasons for the college’s national recognition alongside such highly selective institutions as the United States Military Academy at West Point, the United States Naval Academy, and St. Mary’s College of Maryland.

Over the past year, MCLA has added a number of new degree programs to support the needs of Berkshire County employers, including a health sciences major and the community health education major within the department of biology, as well as two new concentrations in pre-medical professions and pre-veterinary. Additionally, the computer science department added a concentration in electrical engineering, and a new entrepreneurship minor was added within the business administration department. MCLA’s performing arts department introduced new concentrations in design and studio art as well as minors in dance, design and music production.

The new programs not only meet student and employer demand, but also generate new revenue streams that enable the college to invest in upgrades that will continue to foster student success.

Catharine B. Deely is a marketing and communications professional, and a proponent of the creative economy and economic development. She has held executive positions at the Isabella Stewart Gardner Museum, the city of Los Angeles mayor’s office, Citicorp and for members of U.S. Congress. She has served on the boards of Berkshire Creative, Berkshire Children and Families, Norman Rockwell Museum, and Los Angeles Arts Loan Fund.

Rachel Melendez Mabee is a communications professional with over 13 years of experience developing and executing end-to-end marketing plans for local and national organizations. An accomplished golfer, Mabee played collegiate golf for Penn State University before ultimately graduating from the University of Georgia. As PGA WORKS program manager for PGA REACH, Mabee is responsible for the oversight and overall execution of PGA REACH’s diversity and inclusion program, PGA WORKS. Mabee recently completed the Berkshire Leadership Program, served on the Berkshire Museum gala committee for the past two years, and serves on the advisory board for Goodwill of the Berkshires’ Suit Yourself.

Josh Simpson of Shelburne Falls has been a leader in the studio glass art movement for more than 45 years. For the past 35 years, Simpson’s work has been featured in the “Arts in Embassy” program at U.S. embassies worldwide. Simpson has taught at Haystack Mountain School, Penland School of Crafts, the Studio of the Corning Museum of Glass, Snow Farm – the New England Craft Program, and Whanganui Polytechnic in New Zealand. He has lectured and demonstrated his art at universities and museums in Asia, Europe, the Middle East, and Australia. Simpson currently serves on the board of the American Craft Council and the Greenfield Northampton Cooperative Bank; he was president of the Glass Art Society and on the boards of the Sandwich Glass Museum and WGBY. He is a fellow of the Corning Museum of Glass.

Jeffrey Thomas of Williamstown is the founder and executive director of the North Adams-based startup incubator Lever. A strident advocate for STEM education, Thomas has lectured at leading institutions including the University of Michigan, Harvard University and MIT. In 2011, Thomas established Williams College‘s entrepreneurship program, which, to date, has supported more than 1,000 students and twenty student enterprises. Founded in 2014, Lever has helped launch dozens of startups that have created more than 150 jobs. Lever has provided paid internships to 35 college students and through its new program, Berkshire Business Interns, and placed 30 more students in paid internships at businesses throughout the county. Thomas holds a bachelor’s degree from Wabash College, and doctorate and medical degrees from Indiana University.

Michael J. Wynn is the commanding officer of the Pittsfield Police Department. Wynn graduated from Taconic High School, attended the U.S. Naval Academy, and graduated from Williams College with a degree in English literature and American studies. In 1993, Wynn began his career in the city of Pittsfield as the first director of the Westside Neighborhood Resource Center. He attended the police academy in 1995 and joined the police department in 1996. Wynn has served as a U.S. Drug Enforcement Administration leadership fellow and as an instructor at the Western Massachusetts Police Academy. He has led the PPD since December 2007 and is president of the Berkshire County Law Enforcement Council. He also currently serves on the boards of the Berkshire Taconic Community Foundation and NRM.

Bennington, Vt. — Starting this fall, Bennington College will participate in a four-college consortium focusing on the global refugee crisis, supported by a $2.5 million grant from the Andrew W. Mellon Foundation.

The grant will fund the Consortium on Forced Migration, Displacement and Education created by Bennington, Vassar, Bard and Sarah Lawrence colleges. The funds, which will be distributed over the next four years, will be used to develop curricula and other programs on the issue of forced migration. The consortium was formed as a new model for addressing the current forced migration crisis, going beyond humanitarian relief to remedy global inequality in an educational context.

The grant will also support two signature projects at Bennington’s Center for the Advancement of Public Action: GANAS, an outreach to undocumented Latino migrant workers in Vermont that aims to connect them with community organizations and partners providing legal, educational and medical resources; and Bennington Translates, an innovative multi-lingual, multi-disciplinary translation and interpretation project.

The first phase of planning for the implementation of the grant will begin Friday, Oct. 26, and Saturday, Oct. 27, when representatives of all four colleges will gather on Vassar’s campus to finalize details of “Lexicon of Forced Migration,” an introductory class that will be one of the key elements of the new curriculum at the four colleges.

The AIF designation signifies specialized knowledge of fiduciary responsibility and the ability to implement policies and procedures that meet a defined standard of care. The AWMA designation requires completing a course of study encompassing wealth strategies, equity-based compensation plans, tax reduction alternatives and asset protection alternatives, and culminates with an exam that encompasses real-life situations.

A Berkshires native, Marcotte began working at BMM while he was still in high school. Over the next decade, he was an integral part of building the firm from the ground up. He attended Massachusetts College of Liberal Arts while working at BMM and earned his Bachelor of Business Administration. He now serves as a financial advisor specializing in retirement planning.