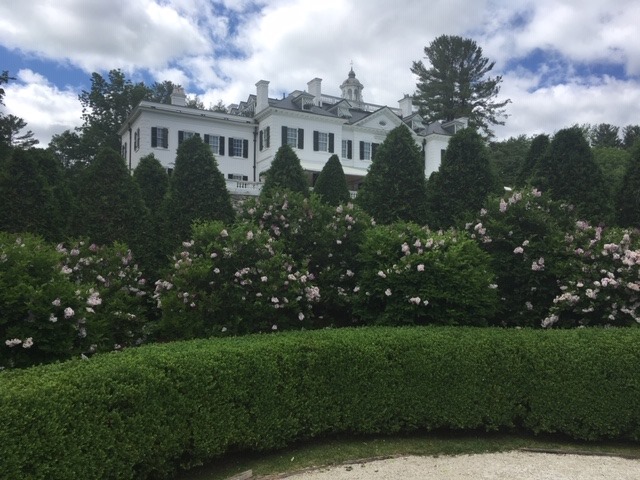 Summer foliage at the Mount, which has received a $300,000 grant from the National Endowment for the Humanities. Photo courtesy the Mount

The Mount receives $300,000 grant from National Endowment for the Humanities

Lenox — The Mount has been awarded a $300,000 grant by the National Endowment for the Humanities. The grant will fund humanities-related programs and staff positions through December 2020. The award allows the Mount to expand its roster of online literary conversations and move forward with reopening, currently scheduled for mid-July, in compliance with anticipated COVID-19 safety guidelines.

The funding is part of the NEH’s $40.3 million CARES Act economic stabilization program, which offered emergency relief grants up to $300,000 to support humanities organizations with a focus on retaining and hiring staff. The NEH received more than 2,300 eligible applications from cultural organizations across the country requesting more than $370 million in funding. Just 14% of the applicants were funded, and the Mount was one of the relative few to receive the maximum award. The 317 grants approved will allow cultural organizations to retain staff to preserve and curate humanities collections, advance humanities research, and maintain buildings and core operations.

The Mount has already begun its transition to online content and will continue to expand its offerings. The funding will also support the Mount’s reopening plans as it prepares for limited capacity on-site visits. Plans include increased signage, a self-guided audio tour, enhanced cleaning and disinfecting protocols, and COVID-19 training for staff. The Mount anticipates opening its outdoor terrace café, main house, and bookstore by mid-July in accordance with the yet-to-be issued Massachusetts guidelines for the Phase III reopening. The gardens, grounds and trails remain open to the public daily from dawn to dusk.

Ghent, N.Y. — Hawthorne Valley Farm has planted over 300 trees as part of silvopasture, which is the incorporation of trees into farm field management in a way that benefits grazing animals and improves carbon capacity.

The trees were planted this spring by 20 volunteers in a meadow on the farm’s Schnackenberg Road campus in Ghent. The varieties include a mixture of honey and black locust, mulberry, hybrid poplar, and chestnut, which all have high-quality feed value for cows in the pasture.

An opportunity to make the idea of silvopasture a reality came after Sophia Hampton, a member of the first cohort of Hawthorne Valley’s Place Corps gap year program, did an independent study that focused on this form of agriculture. In collaboration with Connor Steadman of AppleSeed Permaculture, Hampton and HVF staff developed a plan to establish strips of tree crops in a young stock meadow that suffered from excessive southern exposure.

“The impulse for the project came out of the growing awareness of the agricultural value of trees,” said Hawthorne Valley Farm director Spencer Fenniman. “The goal of these trees, planted along contours on the hill, is to improve the carbon capacity of our agricultural fields, to provide shade, create habitat corridors, and tree fodder for our cows, who do seek out leaves to eat.”

Great Barrington — Volunteers in Medicine Berkshires has announced that W. Scott Rogers has joined the organization as treasurer and member of the board of trustees. Rogers has more than 30 years of experience as a professional economist, including more than 20 years in senior roles at the International Monetary Fund. His expertise in both the government and corporate sectors covers fiscal, monetary and exchange rate policy, debt management, inflation risk management, and national energy planning.

From 1992 to 2014, Rogers served in a variety of roles at IMF. As mission chief to Nigeria, Burkina Faso, Niger, Cape Verde, Burundi and Eritrea, he led IMF’s financial negotiations and annual country consultations, and helped design economic and financial policy frameworks to promote sustainable economic growth. Rogers also served at IMF as senior resident representative to Nigeria, Kenya and the Federal Yugoslav Republic of Macedonia, and was a senior economist and desk officer for Uganda. Before joining IMF, Rogers was a senior economist in the international economics department at DRI/McGraw Hill, an economist in the industrial countries division at the Federal Reserve Bank of New York, and an economic associate in the National Center for the Analysis of Energy Systems at Brookhaven National Laboratory.

Rogers and his wife, Susan Phillips, have two grown children and live in Windsor, where he chairs the town’s finance committee. Rogers received a Bachelor of Arts in economics from Swarthmore College and a doctorate in economics with concentrations in applied macroeconomics, international and development economics from Boston University.

Lakeville, Conn. — Salisbury Bank has announced that Andrea MacArthur has accepted the role of assistant vice president, mortgage advisor in the bank’s residential lending department. As a mortgage advisor, she will be responsible for the origination of residential mortgage loans, including new purchases, refinances and home equity lines of credit.

Sean Grady has been hired as human resources business and communications manager. Grady has been a part of the BCC community for over six years, working part-time while he pursued his education. He earned his associate of science at BCC, his Bachelor of Science from UMass Lowell, and recently completed the Master of Business Administration program at UMass Amherst’s Isenberg school of Management. Grady has filled multiple roles on campus over the years, including in the facilities department, the mailroom and copy center, the Osher Lifelong Learning Institute and most recently, in human resources. As part of his MBA program, Grady also served as an intern and completed his practicum in the marketing and communications department.

T.J. Karis has joined the enrollment services team as an admissions counselor. Karis recently graduated with honors from Massachusetts College of Liberal Arts, majoring in philosophy and English literature with a minor in Spanish. He also earned an associate degree in liberal arts and sciences with a concentration in world languages from Middlesex Community College. Most recently, Karis worked in access services at Southwestern Vermont Medical Center in Bennington, Vermont. A lover of languages and linguistics, he is fluent in Spanish, proficient in Italian and Esperanto, and has basic proficiency in Russian, American Sign Language and Arabic.