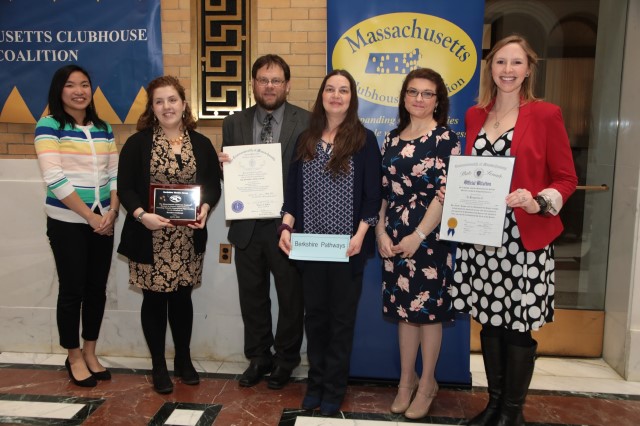 Pittsfield — Berkshire Theatre Group has announced that it was honored April 3 as employer of the year for “providing valuable employment opportunities for the members of Berkshire Pathways,” at the Massachusetts Clubhouse Coalition’s annual employment celebration at the State House in Boston. BTG ticket office associate Joanne Rosier was also honored as a Clubhouse member and BTG employee.

Nonprofit Center of the Berkshire to hold workshop on cyber security

In the two-hour workshop led by IT consultant Rob Horner, participants will learn the most important computer security practices, what to do if their computers or email get hacked, how to secure email and browsers, common types of malware and anti-malware techniques, and other tips and tricks to prevent security issues and identity theft.

Dalton — Berkshire Money Management’s founder and CEO Allen Harris and client success coordinator Lauren Russo have both achieved their Certified Value Builder certification after a combination of online, case-study and international training. CVBs are trained to work with business owners to utilize the Value Builder System, a specific methodology and software designed for business owners who want to retire by selling their businesses at a premium, increasing the profits and value of the business. In addition, Harris has also earned the designation of Certified Business Valuation Specialist by passing courses including “Evaluating Business Entities,” “Financial Statement Analysis” and “Classical Valuation Approaches.”

Sheffield — The Berkshire Taconic Community Foundation has announced that it awarded $6.5 million in grants and scholarships in 2017, an increase of over $500,000 from 2016. The foundation distributed an additional $6.7 million to more than 50 nonprofits with whom the organization partners in stewarding financial resources used to build healthy and vibrant communities.

Individuals, schools and nonprofits in Berkshire, northwest Litchfield, Columbia and northeast Dutchess counties received grants in a variety of interest areas including $2.5 million for education; $1.6 million for health and human services; $1.1 million for arts and culture; and $1.1 million for civic, environmental and religious activities.

New and existing donors contributed a total of $15.7 million in gifts in 2017. Those gifts, combined with asset growth through sound investment performance, helped BTCF surpass $150 million under management as the foundation marked its 30th anniversary.

Pittsfield — Greylock Federal Credit Union reported a solid 2017 at its 83rd annual meeting held March 27 at the Colonial Theatre. In its 82nd year of operation, Greylock’s core operating earnings were $6.7 million, up from $4.7 million the prior year, with total assets of about $1.16 billion. Greylock’s regulatory capital ended the year at 10.30 percent, up from 9.94 percent in 2016, improving upon Greylock’s “well-capitalized” rating as determined by the National Credit Union Administration. During 2017, Greylock grew its loan portfolio to more than $959 million and continued its position as the county’s top originator of mortgage loans and consumer loans.

In its 2017 Community Development Program, Greylock:

At the end of 2017, Greylock posted the following results: