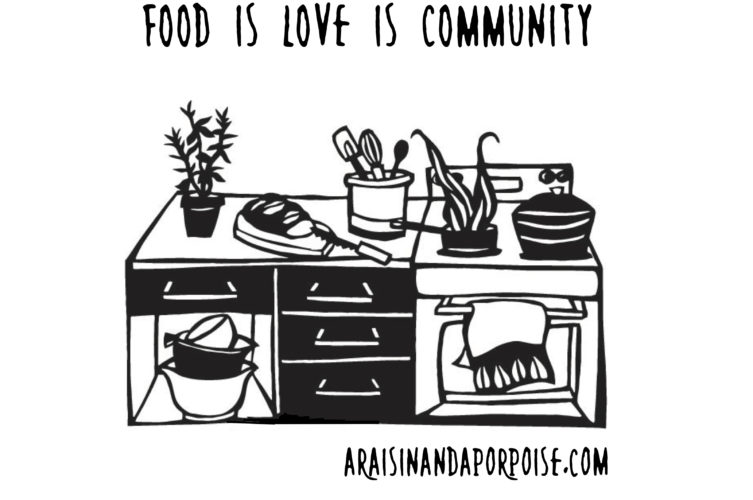 The T-shirt promotion, offered through Monterey T-shirts, allows organizations to keep half of the funds raised through sales. T-shirts are $20 each, and Elsbach’s feature a homey cooking scene rendered in papercut, and the language “Food is Love is Community.”

Given the restrictions of COVID-19, the group meal has been suspended, but Berkshire South has pivoted quickly to stay present and keep food available to community members. Its Nourishing Neighbors program makes 500 cold meals from local restaurants available for free through a non-contact distribution program.

Elsbach and the book’s publisher partnered with Feeding America to designate a portion of each book’s sale price to efforts to combat hunger nationwide. To date, book sales have underwritten 15,000 meals.

Elsbach’s blog, A Raisin + A Porpoise, has featured several virtual community suppers for Berkshire South via social media channels, in which she offers pantry-extending tips to make quarantine cooking less of a chore.

“In the era of COVID-19, any type of change to structure and function could have significant impacts on businesses. The Paid Family Medical Leave Act has the potential to be one of those structural changes, and it’s imperative that our regional community be fully vetted on the act, its changes, and what it could look like for themselves and their businesses and employers,” said Butler.

The event is free and open to the public but registration is required. For more information or to register, see the Berkshire Edge calendar, or contact 1Berkshire at (413) 499-1600 or info@1berkshire.com.

Moncecchi joined Greylock in 1994 and has held positions of increasing responsibility in a variety of departments throughout the organization. She lives in Windsor with her husband, Joe, and has two children.

North Adams — After the successful completion of a crowdfunding campaign with Patronicity and earning a matching MassDevelopment Commonwealth Places grant, the Ashland Street Initiative has announced the selection of muralist Gaia as the artist who will paint a large-scale mural as part of the Ashland Street efforts.

The Ashland Street Initiative is a collaborative effort of the NAMAzing Initiative, Common Folk Artist Collective, Northern Berkshire Community Coalition and the city of North Adams to help facilitate creative placemaking along the Ashland Street corridor from Massachusetts College of Liberal Arts to the corner of Main Street. The effort, developed and launched in spring 2019, is fully funded through community crowdfunding and a $12,500 MassDevelopment matching grant. The scope of the project includes a number of tree plantings along the corridor completed in fall 2019, custom benches and bike racks being fabricated and installed, crosswalk flag stations to increase pedestrian safety, and a number of creative installations and green space improvements. As a cornerstone of the project, a large-scale mural has been planned to be painted on the north-facing wall of the North Adams Housing Authority complex.

Gaia grew up in New York City and is a 2011 graduate of the Maryland Institute College of Art with a Bachelor of Fine Arts. His studio work, installations and gallery projects have been exhibited throughout the world, most notably the Baltimore Museum of Art; Rice Gallery in Houston; the Palazzo Collicola Arti Visive in Spoleto, Italy; and the National Center for Civil and Human Rights in Atlanta.

To inform the design for the mural, the Ashland Street Initiative will be working with Gaia to conduct a survey of residents in the complex and interested community members to help draw inspiration for the design directly from those most connected to the building.