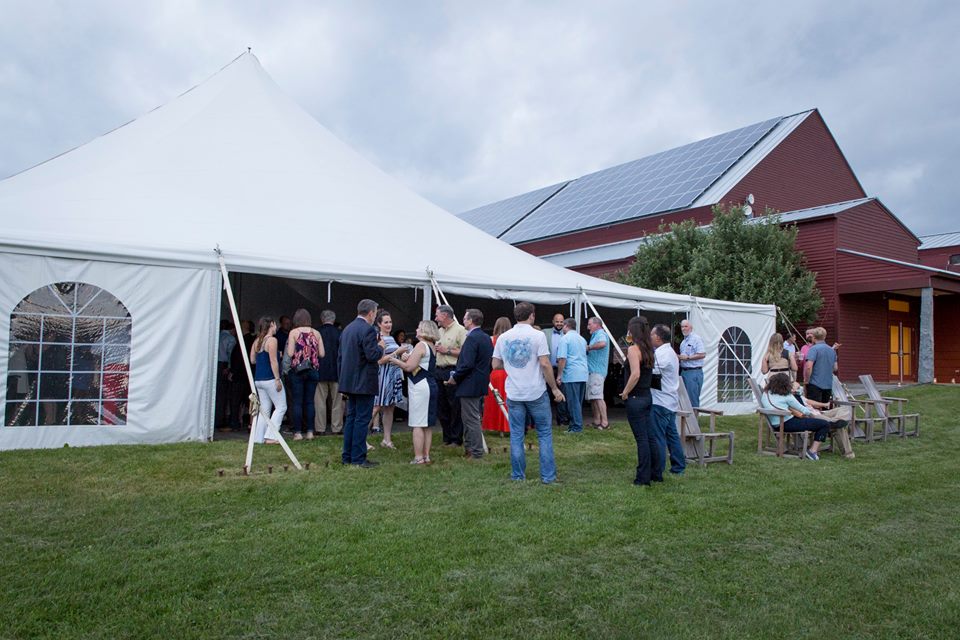 Pittsfield — On June 21, Berkshire United Way held its volunteer engagement and community-building 2017 Day of Caring. At the heart of the event was the distribution of 1,200 literacy backpacks–one for every incoming kindergartener in Berkshire County­containing essential resources for school readiness and tools to build literacy skills. The backpacks were distributed at eight pop-up parties throughout Berkshire County. Each party featured a variety of family-friendly activities such as storytimes, crafts, games, and even an opportunity to hop on a school bus.

To celebrate the work of the initiative and all volunteers involved, Berkshire United Way presented a Movers + Shakers dance party at Hancock Shaker Village on June 23 that featured DJ BFG, farm-to-table snacks and pop-up performances by local talent. The celebration also provided attendees with an opportunity to view some of Berkshire United Way’s work. Among the featured displays were posters from the organization’s social norms campaign in local high schools, a slideshow featuring photos from the Day of Caring, and an opportunity for attendees to vote on the next Pittsfield Prevention Partnership billboard campaign. Attendees also had an opportunity to participate in #BuildingOurCommunity one brick at a time at a LEGO table.

In addition to the backpacks and activities, 28 businesses and restaurants participated in the event by giving generous, one-time gifts of $250 to Berkshire United Way. County residents were encouraged to shop and dine at these businesses, which featured a “We Care” Day of Caring 2017 decal on site. Proceeds totaling $25,000 from the party and We Care campaign will benefit Berkshire United Way’s early childhood development efforts across the county.

An increase from last year’s total gift of $2,000 from Lee Bank, the combined support provides funding to help ensure that all children will benefit from Berkshire South’s summer excursions regardless of their ability to pay for them. This year’s trips will include outings to the Berkshire Museum, MASS MoCA, Barrington Stage Company, the Bidwell House Museum, Action Wildlife Foundation and Lake Mansfield.

Stockbridge — The Austen Riggs Center has announced that its research psychologist Katie Lewis, Ph.D., has been named the third Robert S. Wallerstein Fellow in Psychoanalytic Research. The fellowship, which includes a minimum of five years of grant funding, will support Lewis’ research study, “Impact of Interpersonal Experiences on Maladaptive Thoughts and Behaviors: An Object Relations EMA Study.” The fellowship was established in 2000 and is supported by a fund created by the late Marshall A. Greene, M.D., in honor of Wallerstein for his contributions to the field of psychoanalysis.

Said Lewis: “Building on the work of suicide researchers and scholars, my research, which is part of a broader Suicide Research and Education Strategic Initiative at Riggs, examines specifically how daily interpersonal interactions influence the frequency and intensity of suicidal thoughts and urges. … Through the analysis and integration of personal historical details, information on general psychological functioning, and details of daily interactions and momentary changes in mood, I hope to be able to identify the distant and nearby pathways that lead an individual to be at heightened risk for suicide.”

Lenox — The board of directors of the Ventfort Hall Association Inc. has announced the receipt of three generous grants from the town of Lenox and the state of Massachusetts.

Lenox’s Community Preservation Act Fund has awarded a matching grant in the amount of $30,000 to be used for the exterior stabilization of the building. Ventfort Hall has also been approved to receive a capital grant in the amount of $125,000 from the Massachusetts Cultural Facilities Fund program. This matching grant will be used for exterior restoration on the building and the elevator project, which is currently underway. In addition, Ventfort Hall has been awarded a $40,000 emergency grant from the Massachusetts Preservation Projects Fund to address repairs to the structural deficiencies in the gable and masonry areas on the roof.

‘Guide to Jobs and Training in the Berkshires’ released

Pittsfield — An updated version of the “Guide to Jobs and Training in the Berkshires” has been released by the Pittsfield Adult Learning Center. The 23-page guide includes career pathways with training of a year or less, employment agencies, and employment-related support services in Berkshire County.

Primarily geared toward individuals entering or re-entering the workforce, print copies provided by the Berkshire County Sheriff’s office will also be available in the next few weeks at selected locations including BerkshireWorks, the Department of Transitional Assistance, Berkshire Athenaeum, and other adult literacy providers and supporters. The online version of the guide will be updated twice a year.