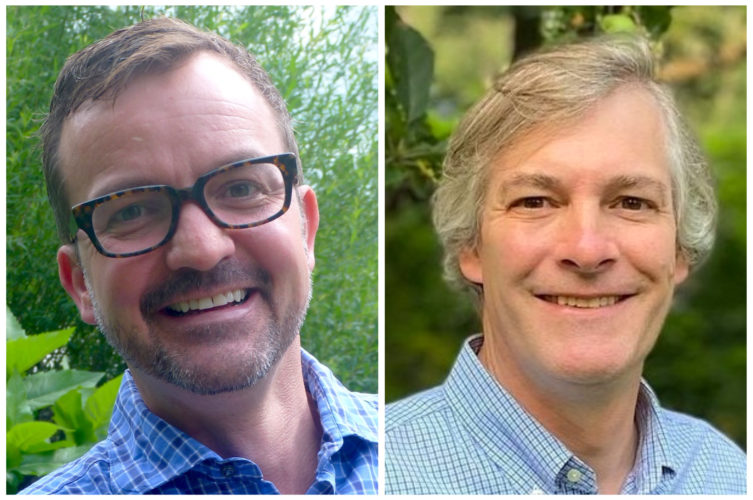 Stockbridge — Mike Beck, Berkshire Botanical Garden’s (BBG) executive director, is taking a sabbatical to spend two years in England. He will accompany his husband, a corporate lawyer with strong expertise in the technology sector, who is pursuing a career opportunity “across the pond” that will extend from this September through 2023.

During that time, Beck’s duties will be fulfilled by incoming Interim Executive Director Thaddeus Thompson. Thompson served as the Director of Institutional Advancement at Tower Hill Botanic Garden in Boylston, Massachusetts, during a period of extraordinary growth and development. He is also a member of the Board of the Massachusetts Horticultural Society, which oversees the Gardens at Elm Bank in Wellesley. Thompson was offered the position after a diligent candidate search conducted by members of BBG’s Board of Trustees.

“Thaddeus emerged as an outstanding candidate for a number of reasons,” said BBG Board Chair Matt Larkin, “including an impressive record of fundraising accomplishments. His skills come to us at a perfect juncture, with Mike going on leave and BBG getting ready to launch the first phase of an exciting new Master Plan to enhance the garden.”

“I’m so grateful that the Board wanted to keep me on,” said Beck. “I’ve been working with Thaddeus over the summer to prepare for the transition; it’s reassuring to know I can leave the Garden in his capable hands for the duration of my leave.”

That the Board was willing to consider a two-year sabbatical is testament to how much Beck is respected and well-liked by the Garden’s staff and Trustees. His leadership, for close to eight years, has attracted a strong and talented staff with a great sense of teamwork. During his tenure, the Garden has expanded in many ways, including an arts program that has put BBG’s Leonhardt Galleries on the map as a significant cultural venue; a Music Mondays program that is attracting new audiences to the Garden; a new Tea Room offering refreshments; and exponential growth in attendance. He also successfully led the Garden through the pandemic, keeping the grounds open on a limited basis as a community service, and keeping the staff fully intact, with no layoffs.

Great Barrington — The Community Development Corporation of South Berkshire (CDCSB) has added Allen Harris to its Board of Directors. Harris, a Berkshire native and longtime resident of Dalton, was elected to serve a three-year term this week.

He is the founder and CEO of Berkshire Money Management (BMM), a full-service financial management firm, located in Dalton. Harris is a professional investment management veteran who, for more than 20 years, has used his expertise to help clients increase their investment portfolio value while protecting their wealth during economic downturns. He has grown his company to more than 15 employees and is in the process of opening BMM’s first satellite office on the corner of Castle and Main streets in Great Barrington.

“Our move to Great Barrington means we’ll widen our primary target area, which we have already begun by making donations to area non-profit organizations,” said Harris. “But a check can only go so far. The CDCSB has presented me with an opportunity to apply time, experience, and physical effort to helping the southern Berkshires become an even better place.”

In his personal life, Harris has a passion for philanthropy, with a particular focus on animal welfare. He has personally fostered scores of pets in his own house as he tried to find them “forever homes.” Dedicated to community engagement, he is also a strong supporter of both economic revitalization and the arts in the Berkshires. He will be a member of both the Economic Development and the Marketing/Fundraising subcommittees of the board, helping to move forward the CDCSB’s mission to build affordable housing and support small businesses.

The CDCSB has already benefited from Harris’ generosity as the lead sponsor of the CDCSB’s upcoming virtual film fundraising event, taking place via Zoom on Friday, Oct. 8 at 7 p.m.

The three new vice presidents were hired after an intensive search process that included multiple interviews and open meetings for campus community members including students, faculty, and staff.

Joseph DaSilva joined MCLA in June 2021. He has worked in public higher education for over 28 years, the last 21 of which were at Springfield Technical Community College in Springfield, Massachusetts. He holds a bachelor’s degree from Western New England University and a master’s degree in higher education administration from Bay Path University.

Dr. Richard Glejzer joined MCLA in July 2021. He was most recently the Interim Dean of Graduate Studies at Muhlenberg College, and previously served as Provost and Dean of Faculty at Marlboro College for 10 years. Prior to joining Marlboro, Glejzer served as professor and chair of English at North Central College, and as chair of the college’s academic programs and policy committee. Glejzer received his bachelor’s and master’s degrees in English from the University of New Hampshire and his Ph.D. from University of Missouri-Columbia.

Dr. Jeannette Smith joined MCLA in June 2021. She is a scholar-practitioner with 16 years of experience in higher education, having worked most recently as the Associate Dean of Student Affairs and engagement at Evergreen State College. Prior to that, Smith was employed at Truckee Meadows Community College; University of Nevada, Reno; and Elmhurst College. She earned her bachelor’s degree in journalism/marketing, and her master’s degree and Ph.D. in higher education administration/educational leadership from the University of Nevada, Reno.

Before transitioning to real estate, Schoenfeld spent 42 years in the financial services industry, where he held senior roles at Lehman Brothers, Schwab, and State Street Global Markets, in addition to running his own discount brokerage firm. Upon retirement, Schoenfeld — who first purchased a home in the Berkshires in 1987 — became a full-time Berkshires resident and launched a second career as a real estate salesperson.For the past six years, he has focused on residential sales, representing clients buying and selling homes at all price points, ranging from $100,000–$4.6 million.

In her nearly 20-year career in real estate, Szwyd has worked with buyers and sellers on a wide range of transactions. She comes to the firm from Stone House Properties, where she spent five years as an Associate Broker, and she also worked previously as an Associate Broker with Barnbrook Realty and Century 21. A native of Krakow, Poland, Szwyd has lived in the Berkshires for 30 years and has been a realtor since 2005. She previously worked as a personal trainer and brings her philosophy of helping people realize their dreams in every capacity to her role as a realtor.

“Identity theft continues to be a concern for individuals and businesses. One way you can ensure that thieves don’t gain access to information that could be confidential is shredding documents with personal information,” sais Amy Raymond, executive vice president and chief retail banking officer at Salisbury Bank.

Community Shred “Drive-thru” Day is open to anyone, and will be held at the Millerton Branch, 87 Main Street, Millerton, New York on Saturday, Sept. 18th from 9 a.m.–Noon. For the safety of all participants and volunteers, the Bank has changed its Community Shred Days format to Drive-thru, and established the following guidelines: