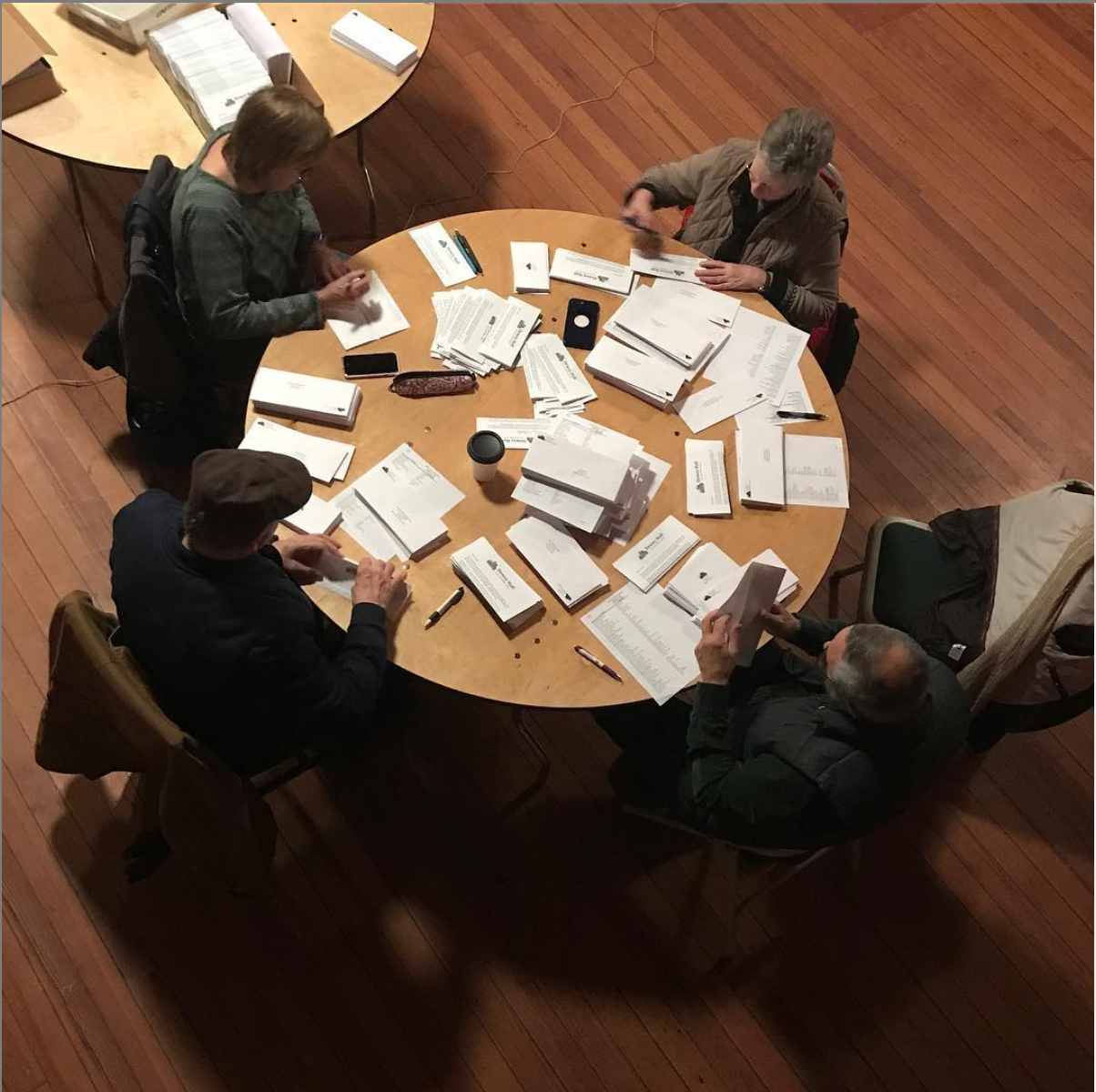 Attendees at the 2018 appeal letter-writing party at Dewey Hall in Sheffield. This year's event will be held Wednesday, Nov. 13. Photo: Beth Carlson

Sheffield — On Wednesday, Nov. 13, from 6 to 9 p.m., Dewey Hall will open to local nonprofit organizations for a festive evening of camaraderie and letter signing/writing. The event is not for sharing donor lists or confidential information, but for enjoying the historic space and signing annual appeal letters with friends.

The event is free and open to organizations that reserve a table. Participating nonprofits are invited to BYOB and snacks to share. For more information or to make reservations, contact Beth Carlson at (413) 429-1176 or catchmyspark@gmail.com.

In his new role, Donoyan will work closely with Eustis and MSHG’s leadership team to oversee operations at each of its hotel properties. Donoyan will focus on revenue generation, operational oversight, owner relations, talent development and strategic growth. He is also tasked with stabilization and development of the brand while enhancing the overall guest experience and reinforcing brand standards.

Most recently Donoyan was the general manager at NYLO Providence Warwick Hotel in Warwick, Rhode Island. Prior to that, he was a hospitality consultant in Boston, and held positions as the director of food and beverages plus director of operations/interim general manager at both the Liberty Hotel in Boston and Hotel Viking in Newport, Rhode Island.

Pittsfield — On Tuesday, Nov. 12, from 8:30 to 11:30 a.m. in the Community Empowerment Center of its 75 Kellogg St. branch, Greylock Federal Credit Union will present a workshop on human resource basics for Massachusetts-based small businesses. The featured speaker is attorney Kevin Kinne of Cohen Kinne Valicenti & Cook LLP. The class will cover topics including sexual harassment prevention, wage and hour law, and the basics of the new Paid Family and Medical Leave Act.

The workshop is free and open to the public. Registration is required due to space limitations. A continental breakfast will precede the workshop at 8 a.m. For more information or to register, contact Carol Hebert at (413) 236-4149 or chebert@greylock.org.

Pittsfield — The Jewish Women’s Foundation of Berkshire County has announced the recipients of its grants for 2019. Dedicated to “tikkun olam,” the Jewish concept of repairing the world, JWF has awarded $40,000 to help combat food insecurity and provide support services for children and families in need.

Foundation members contribute a minimum of $500 to the foundation each year and are offered the opportunity to serve on an advisory grant committee that decides how the funds are distributed. Besides the funds awarded through its grant-application process, JWF funds other community programs such as the Jewish Transportation Network, the Berkshire Medical Center Care Navigation, Jewish camp scholarships, and Berkshire Fuel Assistance Program.

Lenox — The Stockbridge Chamber of Commerce held its annual meeting Nov. 4 at Wheatleigh.

Executive director Barbara Zanetti reported that the officers elected for the 2020-21 term include Margaret Kerswill of Mutability in Motion as president; Lee Watroba of Austen Riggs Center as vice president; Douglas Goudey of Wheeler & Taylor Inc. as assistant vice president; Susan Higa of Main Street Hospitality Group as treasurer; and Mary Flournoy of the National Shrine of the Divine Mercy as secretary. Mike Tucker of Qualprint, Alyssa Stable of Berkshire Theatre Group, Pam Boudreau of Lee Bank and Doug Bagnasco of Devonfield Inn have joined the board as members-at-large.

Jeff Bell of the Inn at Stockbridge resigned as vice president after serving four years on the board of directors. Diane and Vernon Reuss of the Stockbridge Country Inn were appreciated and recognized for all they have done to advocate the Chamber’s commitment to the support of the businesses and the overall well-being of the town of Stockbridge and its environs.