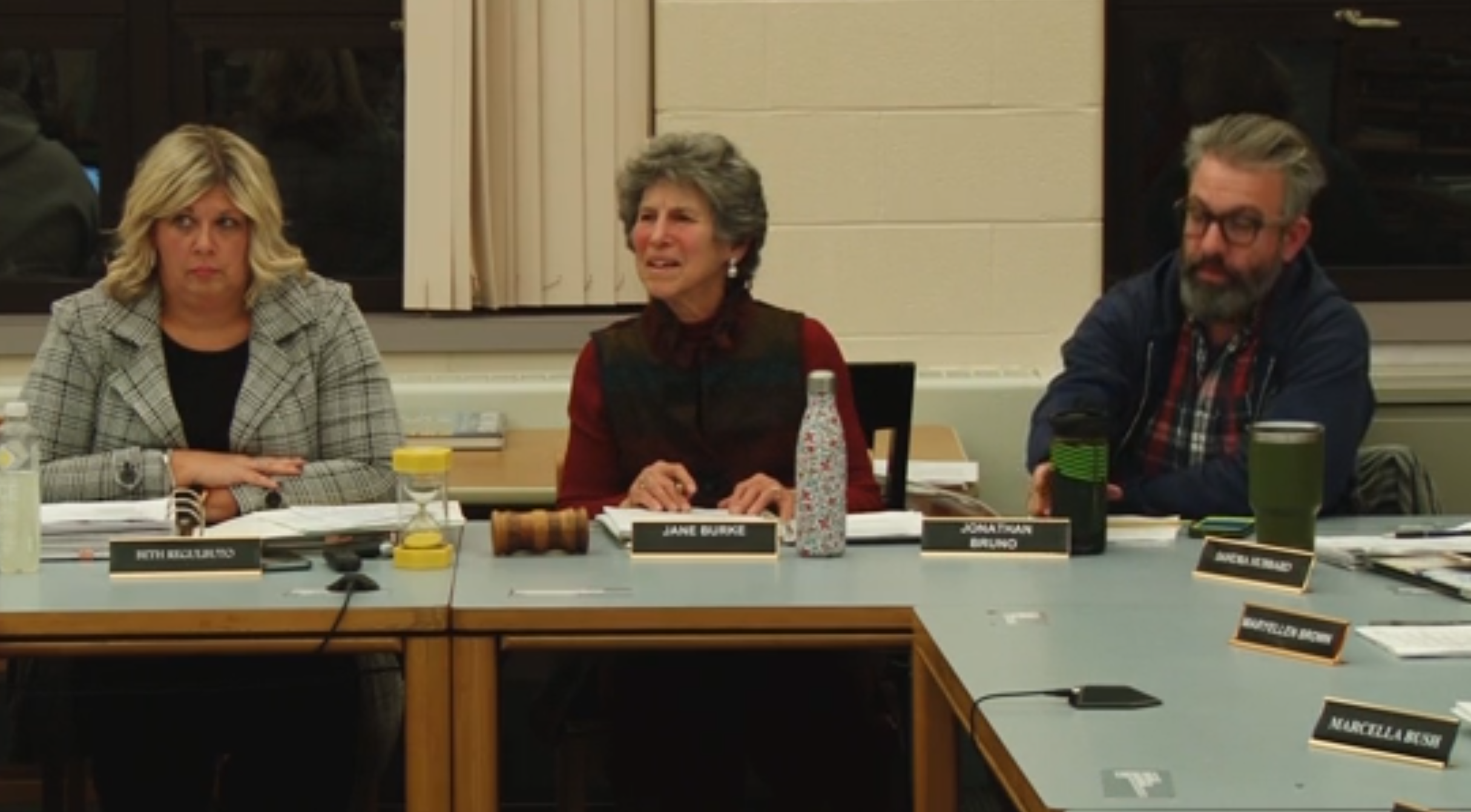 Sheffield — In the wake of a series of controversies that have beset the school district, members of the Southern Berkshire Regional School Committee opted for continuity last week, reappointing their chairperson to another one-year term and voting to enter into negotiations with the superintendent over a new contract. In addition, the committee dismissed a pair of open meeting law violations that had been filed recently.

The November 14 meeting can be viewed on Community Television for the Southern Berkshires. Click here to watch.

New Marlborough’s Jane Burke, the former head of the Flying Cloud Institute who was elected to her first term last November, was reappointed chair by a divided committee over veteran member Dennis Sears of Sheffield. Sears was first elected to the school committee in 2008.

Last year, newcomer Kenneth Knox of Egremont was appointed, though he subsequently resigned because he moved out of the district to West Stockbridge. Knox was replaced by Danile Jordan but Burke, an educator of some 50 years, was subsequently appointed chair.

“This is the one-year anniversary of my first meeting. I didn’t think I would be chair so early as I was,” Burke said after being nominated for a second term as chair by Jeff Blaugrund. “It’s been an incredible learning experience for me. Now I fully understand the role of the school committee and the superintendent and how important the structure of the district is to the success of students.”

Sears, a retired IBM executive who chairs the district’s finance subcommittee, said “the district is in kind of an interesting place right now.” He indicated that he “wanted to capitalize on the experience that I’ve had, not in education but in marketing and governance.”

Bonnie Silvers, a former chair herself who has historically been one of his allies on the committee, nominated Sears and added that the district is at “such a critical point” that Sears’ institutional knowledge and research ability are what the school committee needs.

“I think Jane has done a good job stepping into this role,” Blaugrund said. “She has exhibited the learning that is embodied by everyone in this district.”

The vote was 6-3, with Sears, Silvers and Maryellen Brown dissenting.

The “critical point” Silvers spoke of is defined, in part, by the difficulties the district has faced in the last several months. One was a whistleblower complaint and lawsuit filed Oct. 1 by former dean of students Kurt DeGrenier alleging workplace retaliation, breach of contract and hinting at fraud in his allegation that special education students are not getting the services they’re entitled to.

Later in the meeting and with very little discussion, the committee voted with near unanimity to enter into negotiations with Regulbuto. Silvers was the lone dissenter, with Brown abstaining. Regulbuto has faced much criticism on social media, with some on the Save SBRSD Facebook page calling for her ouster.

“It’s important that people understand that what we’re talking about here tonight is a vote to enter into negotiations, and basically that’s all it means,” said Sears.

Sears added that, contrary to media reports quoting former school committee chair Carl Stewart, Regulbuto’s contract is not automatically extended by one year if the committee takes no action by Sunday, Dec. 1.

The committee also entered into executive session to discuss a pair of open meeting law complaints — one from Stewart and another from Jennifer Brown, Maryellen Brown’s daughter.

After emerging from behind closed doors, the committee cited Massachusetts General Law Chapter 30A Section 21 in allowing it to go into executive session to discuss “complaints or charges brought against, a public officer, employee, staff member or individual.”

Stewart, himself an attorney, acknowledged the committee was within its rights to go behind closed doors to discuss an open meeting law violation complaint, though his complaint alleged the contrary. Stewart later emailed a statement to the news media that read, in part:

“I agree that executive session to consider a claim of an Open Meeting Law violation is proper under M.G.L. c. 30a, Sec. 21(a)(1).  This determination by the Attorney General has apparently never been successfully challenged in the courts of the Commonwealth and thus it is the prevailing law.

“Although the school committee acted correctly, I still believe that unless there are compelling reasons not to meet in open session public bodies should strive to do as much of their work as possible in public view.”

Brown’s complaint was the board had held an “illegal meeting.” She had filed an earlier open meeting law complaint for an email Burke had sent to the school committee about media strategy in response to the DeGrenier and Hubbard lawsuit and complaints. The committee later acknowledged that it erred.

Last December when the committee appointed a new chair, it did so by secret ballot, a clear violation of OML, which states unequivocally that, “No vote taken by a public body, either in open or an executive session, shall be by secret ballot.” A revote was held at the next meeting.