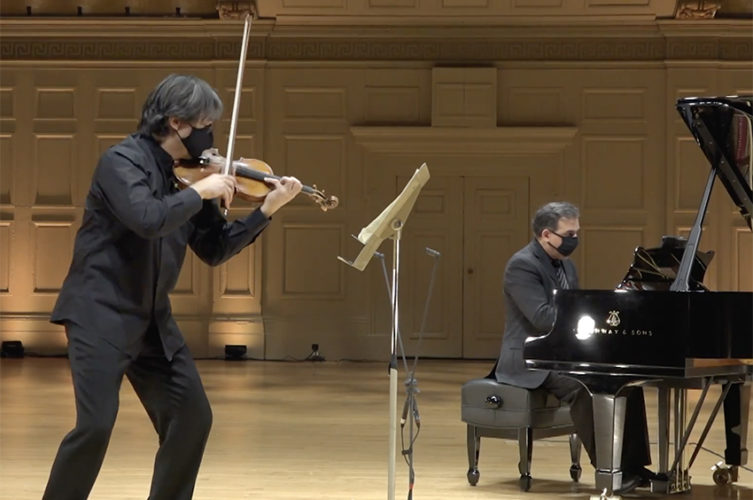 BOSTON — Yes, it is a Beethoven program. But another famous Viennese composer has the last say in this third episode of the Boston Symphony Orchestra’s streaming “Spirit of Beethoven” series, with nine solid minutes of dodecaphonic disorder performed by BSO Principal Second Violin Haldan Martinson. That’s 540 seconds of perfectly disharmonious twelve-tone bedlam.

Dodecaphony (twelve-tone serialism) was Arnold Schoenberg’s stock in trade, his signature contribution to a musical tradition in Vienna that, for generations, had taken its measure mainly from the example of Ludwig van Beethoven. The BSO likes to say that “no composer is more an avatar of change” than Beethoven. But they also like to program Schoenberg immediately following performances of Beethoven’s Fifth and Seventh Symphonies. And they have a point: The greatest avatar of change will inevitably be followed by another great avatar of change.

Beethoven’s impact has been so pervasive over the last two centuries that it’s hard to think of any composer who has not been influenced by him. Just as no writer of English is free of Shakespeare’s influence, no composer is free of Beethoven’s. Every composer from Johannes Brahms to Paul McCartney to Frank Zappa was born with certain Beethoven values embedded in their musical DNA. Now, a century after the Second Viennese School held its first virtual classes, no composer is free of Schoenberg’s influence.

“Spirit of Beethoven” performances were shot in Symphony Hall in December, with the players seated several feet apart from one another on an extended stage. It looked impossible, but the musicians and engineers put their heads together and made it work. The resulting audio mix, a product of unconventional microphone placement, exposes detail in the Fifth and Seventh symphonies that you may have missed in the past.

If Schoenberg’s music bewilders you, then you owe it to yourself to witness BSO Principal Second Violin Haldan Martinson’s electrifying performance of the composer’s Phantasy for Violin and Piano, Op. 47, accompanied on piano with improbable accuracy and sensitivity by Max Levinson. The nine-minute piece comes after Beethoven’s Fifth and Seventh symphonies in the last of the Boston Symphony Orchestra’s “Spirit of Beethoven” series of three concerts celebrating Ludwig’s 250th anniversary year.

In this performance, Martinson wrestles with the perennial question, “Why does the BSO play ‘music’ that to my ears sounds like all the wrong notes? Didn’t the orchestra’s founder say he didn’t care for noise?”

And the answer Martinson gives is a bit like Bruno Mars singing that famous line from “Uptown Funk”: “Don’t believe me? Just watch!”

Mr. Martinson knows perfectly well that many of us don’t believe Schoenberg’s music is really music. So he says, without uttering a word, “Just watch!” as he pours his heart and soul and mind into the abstract musical scaffolding Schoenberg built expressly for that purpose. It’s very personal, and — whoops! — we have just acknowledged Schoenberg’s genius!

Anyone who doesn’t believe him should just watch.

The last “Spirit of Beethoven” episode streams at bso.org through March 27.