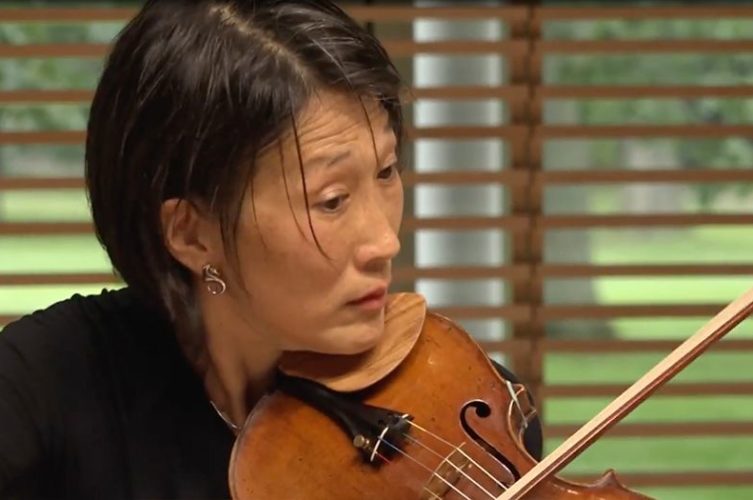 BSO violinist Lucia Lin opened the program with Gabriela Lena Frank‘s haunting “Prayer” from “Suite Mestiza” and made it so much her own that now it’s hard to imagine anyone else playing it. Lin and BSO cellist Owen Young followed with Maurice Ravel’s quirkily beautiful Sonata for Violin and Cello. Lin and Young have worked as a duo before, most recently in this YouTube video that’s part of the “BSO at Home” series. (How they achieved such taut ensemble without being in the same room together is a mystery. Yes, they have a reference track, as usual, playing in their earphones, but it is of limited help when the tempo changes.)

Lin and Young are members of an orchestra known for its impeccable ensemble, and when they perform in a video recital, where instruments and hands are visible at very close range, we get to see details of their musicianship that escape notice when they’re onstage with the entire orchestra.

BSO principal oboe John Ferrillo has been with the orchestra since 2001. Violist Mary Ferrillo joined in September 2019. In an interview with radio station WBUR, Mr. Ferrillo describes how he feels about his daughter’s professional accomplishments: “To see other people so happy for her, who truly enjoy working with her as much as they do, every parent should know that feeling.”

The Boston Symphony Orchestra is one of the tightest bands in the world. Their ensemble is practically perfect in every performance. Everybody knows this. But how the players achieve it is always something of a mystery, sometimes even to themselves. BSO principal trombone Toby Oft says he can’t explain how Tim Genis plays the most perilous timpani parts with such uncanny precision, jokingly wondering if Genis doesn’t have supernatural powers. And we hear this kind of thing all the time from BSO players; they are clearly in awe of one another, and that’s got to be part of what makes the orchestra tick with such sparkling precision.

But the main cause must be chamber music. Chamber music invites players to think and breathe as one — and richly rewards them when they do. That is how, in every chamber music performance, players of the Boston Symphony show us the stuff great orchestras are made of.