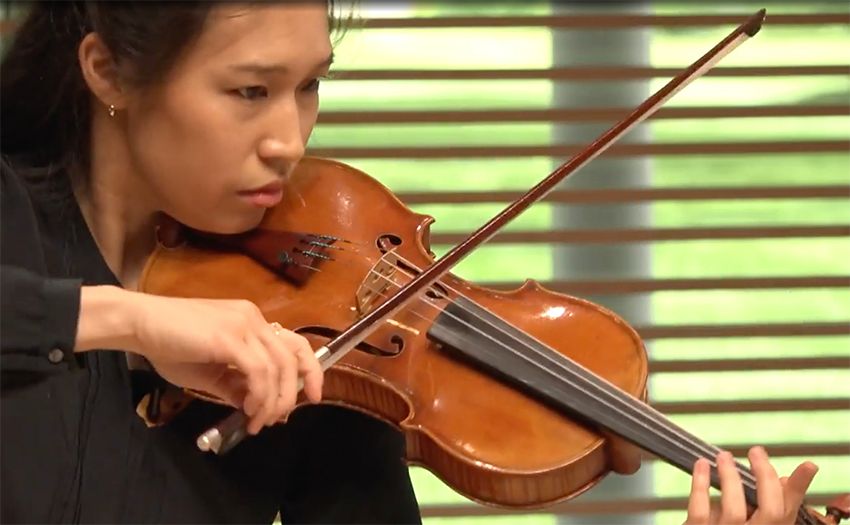 Lenox — You’ve heard her perform countless times since 2006, the year she became the youngest musician ever to be tenured with the Boston Symphony Orchestra. She was 23 years old, and she had to outshine 225 other players to win the job and subsequently fill the role of assistant principal second violin. Since then, you’ve heard her play practically everything in the standard repertoire. But it’s almost certain you’ve never heard Julianne Lee play, from the Shed stage, anything like what she plays in this video, shot in June at Tanglewood’s Linde Center for Music and Learning and released Aug. 21. Hold onto your hat for this one, because in between the Mozart and the Schubert, Ms. Lee performs a breathtaking, white-knuckle-joy-ride of a piece that Daniel Bernard Roumain (a.k.a. “DBR”) wrote in 2001 for unaccompanied violin. Roumain’s hard-driving “Filter” grabs you by the throat and never lets you go, while Ms. Lee amplifies the piece’s intensity with a performance that feels like a fast ride in a stolen vehicle. In fact, her performance of “Filter” threatens to eclipse the next number on the program, Franz Schubert’s String Quartet No. 13 in A minor, D. 804, “Rosamunde.”

But just before Roumain makes it clear you are no longer in Kansas, BSO violist Rebecca Gitter and Julianne Lee open the program with Mozart’s Duo in G for violin and viola, K. 424, delivering a performance of uncanny precision that does the work of four instruments in spelling out Mozart’s harmonies.

This video will be available for streaming through Friday, Aug. 28, at bso.org.