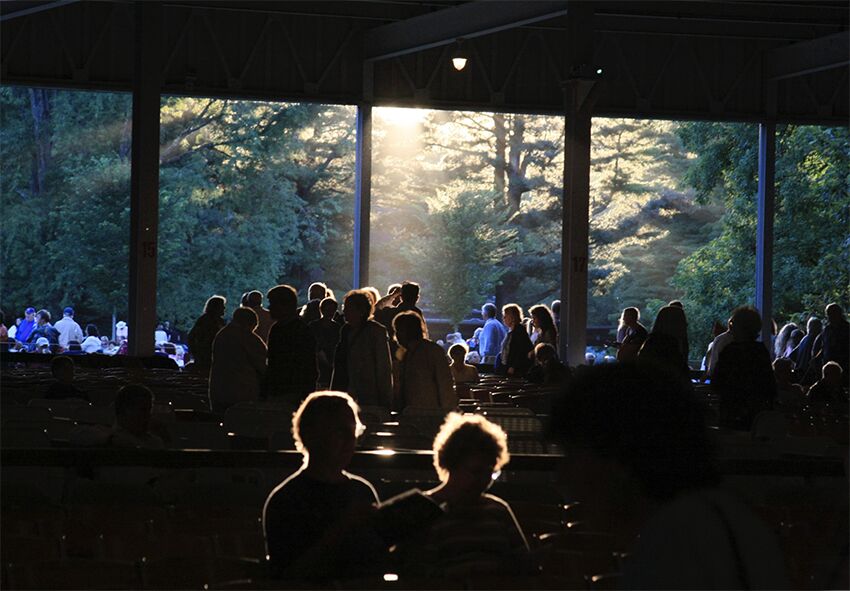 Concertgoers at a delayed performance in the Koussevitzky Music Shed at Tanglewood look to the sky as the last rumbles of a thunderstorm echo through the Tanglewood grounds. Photo: David Noel Edwards

Lenox — When the Boston Symphony Orchestra on April 30 announced its 2020-21 Symphony Hall schedule, concertgoers in the Berkshires took a keen interest, because the virus outbreak has everyone wondering what will become of this summer’s Tanglewood season.

Then, on May 8, Boston Pops music director Keith Lockhart announced that live performance on the Charles River Esplanade in Boston will not take place as scheduled on July 4, also due to public health concerns. But, as Mr. Lockhart explained, the orchestra is putting together an event for broadcast, “The Boston Pops Fireworks Spectacular, A Boston Pops Salute to Our Heroes,” that will highlight the best July 4 performances from years past “to pay tribute to the many and various frontline workers who have been the glue holding our communities together since this health crisis began, and to honor those who have lost their lives due to the coronavirus . . . We are putting all our energies into developing a truly special commemorative broadcast event.”

Seeing the orchestra’s future plans writ large reminds us that the BSO is, right now, building up one helluva head of steam. We just don’t know exactly when we will get the benefit of it in a live setting. But we’re already seeing some amazing work products online, as individual BSO musicians continuing to publish instructional videos, home recitals, and even the outdoor performance video “Alphorn Dream” by BSO associate principal horn Gus Sebring.

Anyone who votes for the Grammys will tell you that the Boston Symphony Orchestra can do things no other orchestra can do. One thing it cannot do is stop making music.