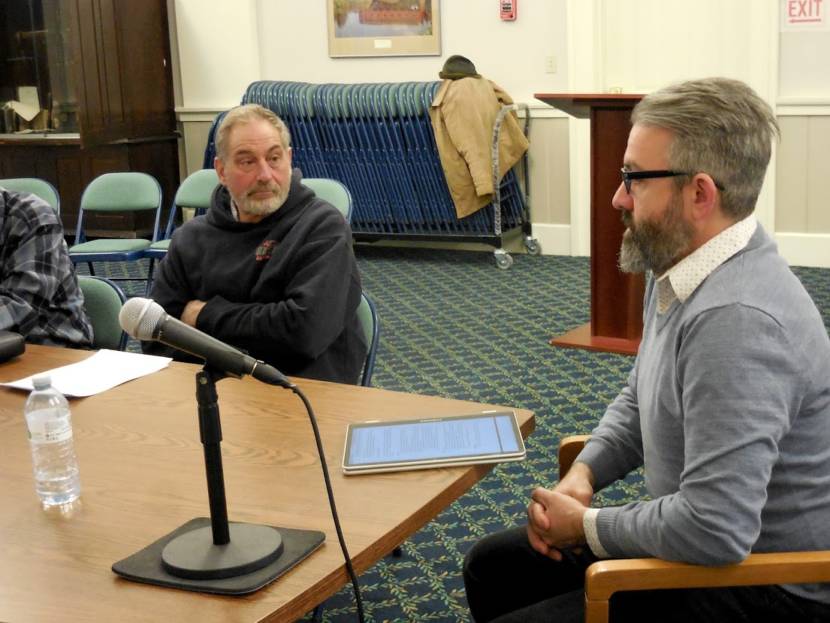 Sheffield — It wasn’t easy but the town of Sheffield now has full representation on the Southern Berkshire Regional School Committee after selectmen and the Sheffield members of the committee voted Dec. 18 to appoint newcomer Jonathan Bruno.

The vote follows a contentious meeting earlier this month in which the Sheffield members of the school committee had refused to appoint Bruno after interim member Tim Schroepfer had withdrawn his name from consideration. Instead, the three school committee members, who outnumbered the selectmen on the appointive body because of the recusal of Selectman Rene Wood, opted to reopen the search.

See video below of the appointive body interviewing the two candidates for appointment to the school committee, along with the deliberation and voting:

At issue was the result of the Nov. 6 elections. Bonnie Silvers and Dennis Sears, both of Sheffield, were re-elected after a spirited race against two younger challengers with children in the district. For a variety of technical reasons including a ballot filing failure, four Sheffield candidates were on the ballot for three seats.

But voters were instructed to “vote for not more than two,” and those two with the most support—Sears and Silvers—were automatically re-elected. Bruno received almost 1,100 votes, with more than 500 coming from Sheffield.

Challengers Bruno and Schroepfer were also running, with Bruno getting more votes than Schroepfer but fewer than either Sears or Silvers. Schroepfer was an incumbent, but only because he was appointed to fill the unexpired term of Bob Law, who died in April. Schroepfer was only supposed to serve temporarily until the beginning of November when a more permanent replacement for Law could be appointed. Got that?

Fetterhoff served on the school committee previously from 2008 to 2012 when the district was going through a difficult time. The district agreement was being amended to select school committee members through district-wide elections rather than being appointed by town officials, and to change the way the five member towns were assessed to pay for their share of the district’s operating costs.

The two other Sheffield members of the school committee who voted for Fetterhoff, Bonnie Silvers and Dennis Sears, are widely viewed as sympathetic to the movement to close or curtail what some call the “outlying schools” in favor of a consolidated campus on the district’s sprawling campus on Berkshire School Road in Sheffield.

The Alford School House, which used to be part of the district, closed in 1992, was later renovated and now houses the Alford town offices. The program at the Monterey School was put on hiatus in 2016, while New Marlborough Central School remains functioning.

If all goes according to plan, South Egremont School is scheduled to reopen next month, according to a settlement reached with the Egremont Board of Selectmen on the remediation of lead levels in the building. Silvers asked Fetterhoff what his position was at the time on the outlying schools.

“I voted before to close them,” Fetterhoff replied. “I tend to still have that opinion unless the situation has changed.”

Fetterhoff and Chairman Herb Abelow were the only two school committee members who voted in 2012 to close New Marlborough, Monterey and South Egremont. After the vote failed, members of the audience reportedly broke out into applause.

Fetterhoff, a woodworker at Berkshire Products, said he was a member of subcommittees on buildings and grounds and on technology. In addition to his work on the regional agreement, Fetterhoff helped negotiate a new contract with the Southern Berkshire Regional Education Association, which represents the district’s certified teachers. He said he would be eager to assume a similar role on the school committee, especially in the area of bringing together various factions in the towns.

Bruno is a teacher and administrator who has almost completed a doctorate in curriculum and instruction leadership at Northeastern University. He currently teaches special education at Housatonic Valley Regional High School, which is part of the Region One School District in Falls Village, Connecticut. Click here to see his statement of candidacy.

Selectman David Smith asked both candidates about their approach to the declining enrollments that have plagued the district for at least the last 15 years. Fetterhoff said closing schools is not the only solution, as there could be a renewed effort to attract more students through public school choice.

Smith said, when he was a student at Mount Everett Regional School in the 1970s, he had 110 students in his graduating class. Now there are between 35 and 45.

Bruno told the panel that one of the things that attracted him and his family to the district from Northampton “is the idea of small schools.”

“I’m not for closing schools; I’m not for opening schools or consolidation because I don’t have all the pieces in front of me,” Bruno said when asked by Selectman Nadine Hawver. “Personally, I like schools that work well and offer students everything that they need.”

Bruno said, for obvious reasons, his passions lie in curriculum. But Sears told him that teaching experience, while valuable, isn’t as much of an asset to the school committee as a background in governance, which Fetterhoff clearly has.

Bruno also touted his knowledge of civics, his experience as a history teacher and advisor to the Model United Nations at a previous school. Bruno has also had experience in fundraising and in teacher contract negotiations but, he acknowledged, “from the union side.” He said he also has budgeting experience from previous positions he held in the Boston area.

Bruno had about half a dozen supporters in the audience who congratulated him after the call for a vote, with school committee member Batacchi joining selectmen Smith and Hawver in voting to appoint him, with Sears and Silvers opposing.

Later, Bruno told The Edge he wanted to thanks his supporters, both voters and elected officials in the room, for their “guidance, and desire to have democracy rule … Their voices and votes were finally heard.”

“Now begins the hard work,” Bruno said. “I hope to help move our district forward with the goal of providing the best education possible for the district’s students while engaging and respecting all stakeholders.”

Hawver told The Edge she was glad that “three elected officials supported the will of over 1,000 districtwide voters.” Sears declined to comment but Silvers sent The Edge the following statement:

“I wish Mr. Bruno good fortune as I sincerely thank Mr. Fetterhoff for coming forward as a candidate with a deep knowledge of the district, governance as it relates to the School Committee, experience as a member of the SC, a parent of one of our children and someone who gave such carefully thought-out answers to our questions.

“Clearly, I believe the difference here is that I viewed this seat as one to be appointed based on the regional agreement and separate from the election; however, I can respect the Select Board’s position of believing their responsibility was to respond based on the results of the November election.”