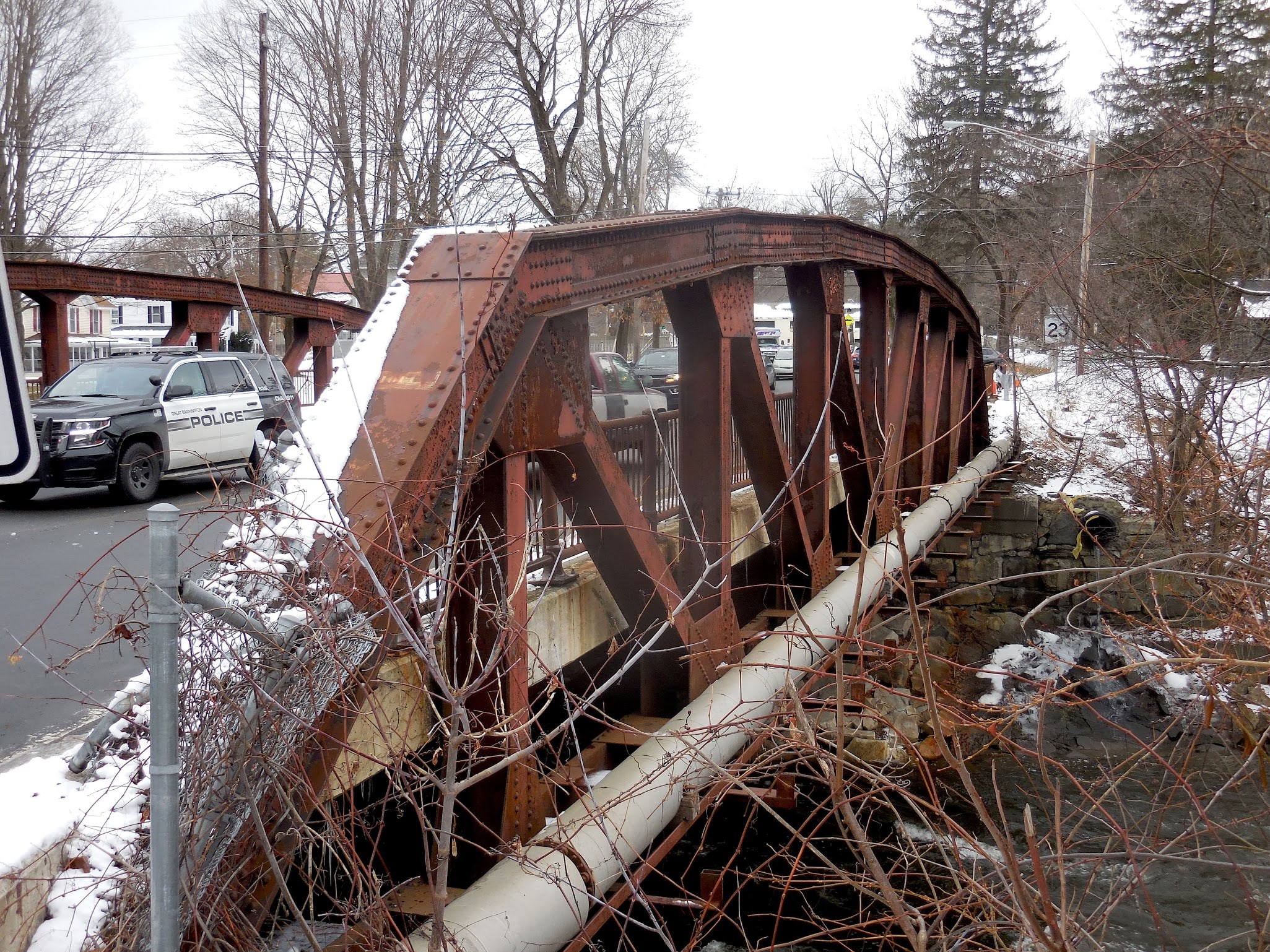 A Great Barrington police cruiser stopped on the Brown Bridge during the morning rush hour in December 2019. Photo: Terry Cowgill

Great Barrington — It’s about to happen and everyone is dreading it. Within two to three weeks, a major reconstruction project will commence on the legendary Brown Bridge at the northern end of Main Street.

In a statement sent Tuesday, town manager Mark Pruhenski said construction will begin late this month or in early July, and is expected to take up to 18 months to complete.

The work will cost the town of Great Barrington almost nothing, beyond the aggravation. The Brown Bridge, which crosses the Housatonic River and links North Main Street and State Road, sits at the intersection of routes 23, 7 and 41, all of which are state highways. The western end of the bridge empties at Domaney’s and the “GB” hedge.

The good news is the bridge will remain open to two-way traffic during construction. The lanes will be narrowed to provide adequate workspace safety and staging areas for materials. Traffic management will be in place, Pruhenski said.

Massachusetts Department of Transportation spokesperson Judith Reardon Riley told The Edge that repairs to the Brown Bridge are part of a District 1 bridge repair contract and repairs include, but are not limited to, strengthening existing steel which has deteriorated, repairing bridge rail and painting the bridge.

The cost estimate for the project is slightly more than $2 million. MIG Corporation of Westborough is the contractor for the project. The plans call for two 12-foot-wide travel lanes during construction with concrete barriers delineating the work zones on the bridge.

State transportation officials have told The Edge they anticipate that there will be times during the setup and takedown of the barriers as outlined in the traffic management plan when traffic will be restricted to a single alternating lane.

“It is anticipated that the work on the Brown Bridge in Great Barrington will be completed by July 2021,” Riley said.

After a lengthy discussion in December, the selectboard voted 4-1 to ask MassDOT to paint the bridge roughly the same color as a famous bridge in California. The dissenter was Kate Burke, who said she preferred rainbow colors.

“Primer red” is roughly the same hue as the world famous Golden Gate Bridge connecting San Francisco with Marin County, California. The Golden Gate’s color can best be described as the middle shade of “International Orange” or, in layman’s terms, somewhere in between orange and bright red.

Click here to read an Edge story that includes the history of the Brown Bridge and see the video below of Design Advisory Committee chairman Pedro Pachano telling the selectboard of the committee’s recommendation of red as the new color of the “Brown Bridge”:

MassDOT said the original structure was built in 1931, when it replaced an older iron bridge, and was last painted in 1981. Since then it has been called the Brown Bridge. However, MassDOT files dating to 1946 show the bridge being called “Great Bridge.”

The bridge is 119 feet long with a curb-to-curb width of 40 feet and an approximate truss-to-sidewalk rail of 48 feet. Based on a June 2019 inspection, the Brown Bridge is currently considered structurally deficient with the superstructure rated a 4, which is considered poor.

Pruhenski said town staff has held a pre-construction meeting and will continue to provide periodic public updates as the work on the Brown Bridge progresses. Questions about the project may be directed to the town Department of Public Works at (413) 528-0867.