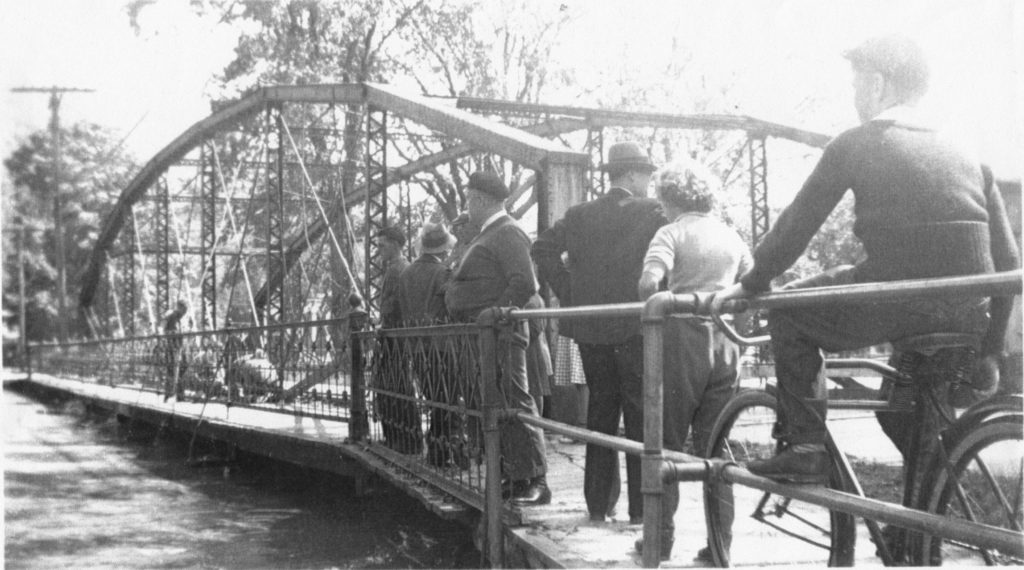 The 1884 metal Bridge Street Bridge across the Housatonic River and joining downtown Great Barrington, Massachusetts, with its 'Brooklyn' district, was severely damaged by flood in 1952 (above) and replaced. (Author’s collection)

The Brooklyn of the Berkshires – and its four bridges

Sure, New York City has the Brooklyn Bridge.

But Great Barrington has had four Brooklyn bridges.

The Brooklyn neighborhood of Great Barrington emerged in the 1870s through the promotional efforts of land developers Mark Humphrey and George R. Ives. Humphrey had a farm on Stockbridge Road. Ives ran a hotel downtown. They owned land on what is now East and Pine streets. Humphrey privately built a bridge over the Housatonic River to open the east side of the river to development. Ives called the area Brooklyn, as many guests at his Berkshire House at the corner of Main and Bridge streets were from Brooklyn, N.Y., and he hoped to persuade some of them to buy land and build homes here.

“The abutments which Humphrey and Ives are building across the river east of the Berkshire House in this village are completed,” The Berkshire Courier said Sept. 14, 1870. “The abutments stand 103 feet apart, the centre of the bridge to rest upon a trestle in the river. Abel French of Williamsville is doing the wood work, the abutments having built by Mr. Whitney … .”

The town in 1880 assumed ownership of the Humphrey Bridge, as it was known for many years, and replaced the span with a Connecticut-prefabricated, all-metal Berlin Iron Bridge Co. through truss that survived until the flood of 1952, when it was damaged and of necessity was replaced with a Warren pony truss steel bridge. That 1950s bridge — the Bridge Street Bridge — still carries traffic every day. 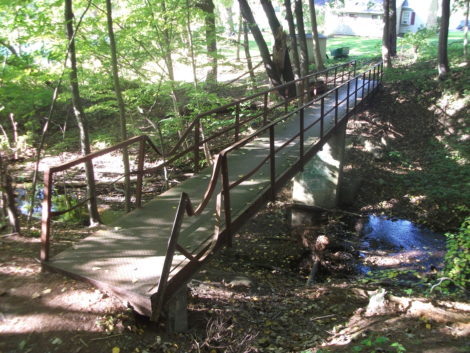 A footbridge links the Grove Street Park and Bentley Avenue. The curved railing is creative artistry left by a fallen tree. (Drew photo)

There are three other Brooklyn bridges. Well, two anyway. The third one washed away years ago.

A still-in-use metal footbridge connects Ladies Picnic Ground on Grove Street with Bentley Avenue. I haven’t identified a construction date. It’s not in the best shape, but it is walkable.

A little keystone arch bridge on the west side of the river is on John Dewey Academy land, behind Railroad Street Youth Project. It was probably built in 1885 over an intermittent stream. The stonework has fallen off on the east side but is relatively intact on the west side. It shows a sense of design that suggests it was built under Mary Frances Sherwood Hopkins’ eye.

The third bridge was a quarter mile south of the Bridge Street Bridge, around a bend. It crossed from the Hopkins meadow on the west to the foot of Little Mountain on the east. That bridge, gone except for the abutments, served one purpose.

Hopkins, widow of Central Pacific Railroad tycoon Mark Hopkins, decided to retire to Great Barrington, where she had attended school and often visited the ancestral Kellogg home on Main Street (it stood in the front yard of Searles Castle). Hopkins inherited a dolomite quarry on what is now Quarry Street and in 1882 had a carriage barn and a coachman’s house built using the stone. In 1885 she began the ambitious construction of an elegant mansion that she called Kellogg Terrace, but everyone today knows as Searles Castle, after her second husband, interior designer Edward Searles. 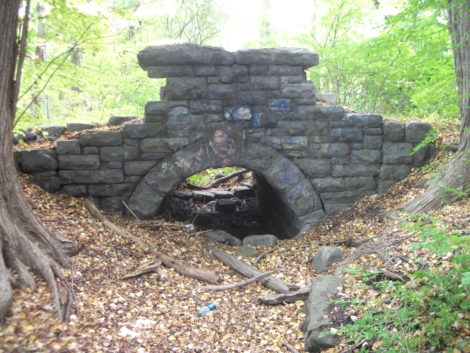 The bridge was built to transport stones from the Hopkins quarry to the Kellogg Terrace construction site. The only documentation I’ve found of the bridge is on Searles’ map of his properties drawn in 1898, and on the Barnes & Farnum 1904 map of the town.

The raw stone was worked in sheds and a yard in the vicinity of the Railroad Street Youth building. Period photographs by Albert L. Bodwell show a short, elevated wooden roadbed rising from the finishing site. Small rail cars were drawn by steam-powered winch to where the mammoth house was going up.

The wooden bridge on Bridge Street may have endured the passage of some carts bearing Hopkins stone in the early 1880s. But the bridge wore out. Heavier loads went around by way of the Rubber Bridge, as it was called, on Cottage Street. In 1883 a crew worked on a new manse for the Congregational Church. The manse was the gift of Mrs. Hopkins. She provided funds and stone. The Berkshire Courier on May 5, 1883, said: “On last Friday the largest stone yet taken out of Mrs. Hopkins’ quarry, to be used in the new parsonage, was brought over, requiring four horses to draw it. It was thought best not to bring it across the rubber bridge with the horses, which were taken off on the other side of the bridge and the wagon and stone drawn over by tackles. It is now being put in shape for a capstone for a double window in the second story, by contractor McNeil of Boston, under the supervision of Mr. McHugh, who has charge of the building.” 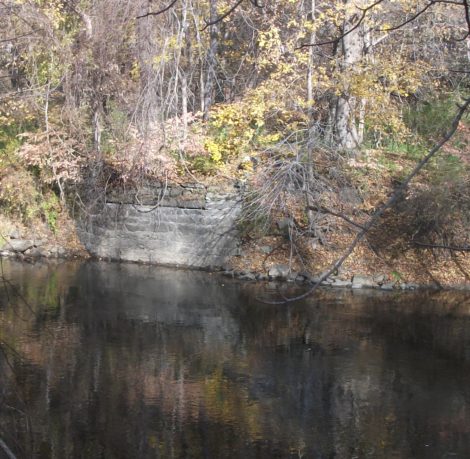 This is the east abutment of a bridge that linked Mary Frances Sherwood Hopkins’ Kellogg Terrace estate with the east side of the Housatonic River — and her stone quarry. (Drew photo)

There’s confirmation in an account from the Springfield Republican May 27, 1885, unsigned but surely filed by teen reporter William E. Du Bois: “The laying of the great foundation-stones of Mrs. Hopkins’s grand residence will begin today. They are immense flat rocks cut from the blue-stone quarry and will make the wall at the bottom eight feet thick. The super-structure will not be so thick, of course. The wall will be form 60 to 70 feet high and the foundation-stones will hold up a weight of from 12 to 16 tons to the square foot. A track has been laid to the house from the sheds on the meadow where the stone is cut, and the great blocks of stone, some of which weigh 12 tons, are brought from the quarry to the sheds on tracks drawn by horses and from the sheds to the house on a car drawn over the railroad by a cable attached to an engine stationed at the house.”

Now consider: The town replaced the Humphrey Bridge with a metal through-truss in 1884, at considerable expense ($2,200). Kellogg Terrace construction began in April. The stones were getting larger and larger — some as heavy as 8 tons. Either the Selectmen gave a directive not to use the new town bridge, or Mrs. Hopkins knew from her contractors that she needed a separate quarry bridge of her own.

In August 1885 Mrs. Hopkins purchased two parcels of land on the east bank of the river, one from Humphrey, one from Frederick Abbey. The eastern abutment was located on the former. The latter carried with it a right-of-way to what is now Bentley Avenue. She already owned the land on the west bank.

If it wasn’t a bridge for quarry wagons, what was it for?

The writer is researching the history of East Mountain and environs and would be pleased to hear stories.

— Emma Goldman
Read next: Writer's Life: No time like the present