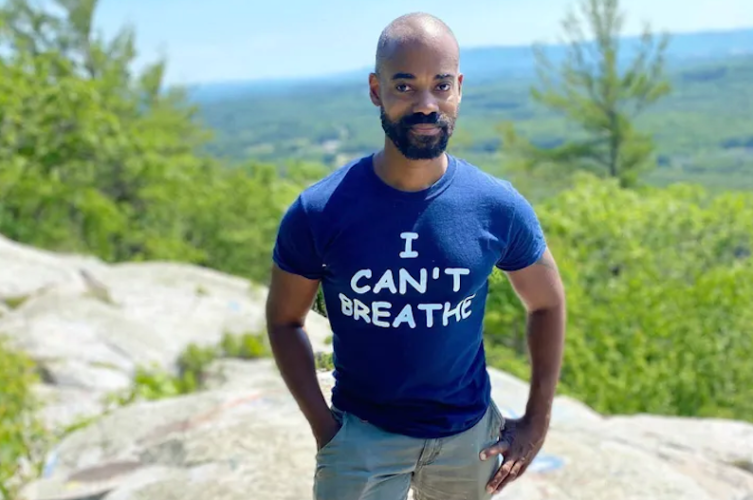 Delano Burrowes in Great Barrington, where he will launch his most ambitious installation to date, The Great Barrington Project: Unbleaching the Souls of Black Folk, this spring. Photo courtesy the artist

Great Barrington — Both Delano Burrowes and W.E.B. Du Bois grew up in Great Barrington — “away up in the hills of New England, where the dark Housatonic winds between Hoosac and Taghkanic to the sea” — albeit more than a century apart. In fact, Burrowes resisted reading about Du Bois for fear of having to confront what he (a self-described Black person in a mostly white community) would find once he began: namely “the layers [of racism] and how deeply I was affected by [it],” Burrowes told The Edge. When he finally turned to Du Bois later in life, he found, on the very first page of “The Souls of Black Folk,” an anecdote that could have been plucked from his own life.

“It was jarring,” Burrowes recalled, reading from Du Bois’ 1903 text about the experience of having his calling card refused by a white classmate. It took Burrowes back to middle school when, at Bryant School in the 1980s, he passed a note to a white classmate expressing a crush — only to be told, “thank you, but my parents would never let me date a [n-word].” Burrowes put the incident “on the shelf, not realizing it was traumatic. Being seen as a problem” was something he came to understand as the crux of his life, along with addiction, thus far.

Today, the Brooklyn-based writer and visual/performance artist continues to grapple with what Du Bois called “double consciousness, this sense of always looking at one’s self through the eyes of others, of measuring one’s soul by the tape of a world that looks on in amused contempt and pity.” It’s a concept that has spurred Burrowes to his latest and most ambitious undertaking to date, The Great Barrington Project: Unbleaching the Souls of Black Folk. For an artist whose work largely relates to what he calls the shadow spaces of Black identity and how Black people navigate the in-between, Burrowes is committed to launching his multi-city art experience in his hometown as a means of asking the local community to explore how Black people are seen, not seen, and interpreted.

“It’s easy to try to pretend we are in a post-racial society, in a place like Great Barrington,” Burrowes said, pointing to the liberal-leaning, rainbow-colored crosswalks and it being dubbed by Smithsonian Magazine the “Best Small Town in America.” Burrowes went on to call the project big, and one he is excited to bring forth for the awareness it might elicit. “I hope to create more dialogue about race and racial bias, especially within the subtle nuances of what are often referred to as microaggressions,” he said, citing the prevalence of indirect, often unconscious discrimination.

Burrowes notices examples of this when he walks down the street and passersby clutch their belongings more closely; or a friend remarks that he speaks so articulately; or when, just last week in Egremont (where his mother still lives), Burrowes got out of his car to go to the market and a white woman, simultaneously getting out of hers, retreated and locked her door. Burrowes describes these everyday encounters as “pinpricks that are constant” and chooses to put the term in quotations to differentiate them from instances that are really aggressive — the kind “that are so dramatic” he can be assured others will notice “and [will] stand and support [me].” The lens through which society views these “microaggressions” is largely damaging, if for no other reason than it leaves the individuals experiencing them to question whether or not their experiences are really true. For Burrowes, the disparity invites another debilitating dilemma: to speak about the injustices and be angry all the time, or swallow them. Even with friends.

Burrowes has grown accustomed to getting comfortable in uncomfortable spaces, an obstacle he has been forced to navigate his whole life. His forthcoming installation will ask others to do the same. The Great Barrington Project will begin in the Berkshires and culminate in Goodwater, Alabama (the small, rural town of Burrowes’ ancestors). The month-long tour, which will include Harlem and Atlanta, will unfold upon a symbolic path — in geographic reverse of the Great Migration, when 6 million Black people traveled to the urban northeast from the rural south, beginning in 1916 — a decision Burrowes equates to “reclaiming Blackness and reclaiming what Edouard Glissant calls the ‘right to opacity.’”

In each city, a table and two chairs will be set up over a three-day period in a public place, ideally outdoors. Individuals who identify as Black will be invited to provide written answers to a pair of questions: How do you see yourself? How does the world see you? Individuals who don’t identify as Black will be invited to sit in a chair across from a Black person, the two silently staring at each other for 15 minutes. The Great Barrington Project is about “reversing that bleaching, letting go of the idea that Black people must pass respectability muster i.e. ‘act/speak white’) to gain a respect that is rarely forthcoming,” Burrowes explained. The installation, as powerful as it is simple, stands to be deeply thought-provoking: “I hope the non-Black person will reflect on the ways they see Black people, and I want the Black person to think and feel what it means to be seen,” he said, adding there will be a rotating group of Black volunteers to sit in the chair in each city, including the artist himself.

Burrowes leans heavily into “otherness,” a concept informed by Du Bois’ thoughts on double-consciousness — which, “for any marginalized group in an oppressive society, [draws awareness to] how you are seen — and you are always conscious of that, you have to be, it’s a survival mechanism.” The risk, then, becomes the likelihood of adopting these attitudes, this sense of “who I have to be,” which leads to “who am I really,” all of which Burrowes distills down to a process of “navigating the internal and the external, constantly.”

For now, Burrowes is practicing compassion, largely for himself, “in the moments when [I] don’t speak up, because [I] can’t always.” Instead, he honors that raising awareness about race relations in today’s world is a process. A turning point for him was the 2016 presidential election, a season that elicited anger and profound rage. It was only after he “vomited out” these feelings in a 12-step meeting that he realized the power of connecting to his emotions. As he connected more deeply to others in his life, he began connecting to himself and feeling comfortable in his own skin for the first time, and realized he was no longer afraid of others’ judgment. It’s a process that, along with being in recovery, has allowed him to shed a sense of obligation and responsibility to be part of what Du Bois called “The Talented Tenth” (a reference to the one in 10 Black men who, by acquiring a college education, writing books, and eliciting social change, have the ability to become leaders of the Black community so long, as Du Bois argued, they cast aside personal interests in the process).

Ultimately, Burrowes has learned to give voice to the “many layers of shame” he carries with him, a process of ownership coupled with allowing others the permission to talk about it, and by extension inviting listeners. Perhaps this is how his work to date can be contextualized: an invitation “to stop, investigate, slow down, and notice those moments” in which hurt is causing individuals to lock doors. This compassion, he said, is the only way forward.

“These conversations we are having about race in this country, in this world, are uncomfortable for all of us,” he said. Meanwhile, he is keen on cultivating curiosity, a practice he equates to a meditation of sorts, of simply noticing things as they arise. In the weeks leading up to the unveiling of his Great Barrington Project, Burrowes invites community members to “notice, with curiosity, the moments in which [you] might be making a judgement, [while understanding] we all do it. Notice the moments when [you] are not seeing someone for who they are, [rather making an assumption]. More than anything, listen … not with the intent of responding … but to genuinely listen,” he explained, calling the listening/looking a discussion, one that invites genuine engagement with others and self. “[By engaging] with uncomfortable parts of ourselves that we all have, [there arises] interconnectedness … part of the human condition.” Bumping up against this discomfort ultimately allows all of us safe passage to the other side.

To read more about and support The Great Barrington Project, visit its GoFundMe page. Look for a follow-up article when dates for the local installation are announced.