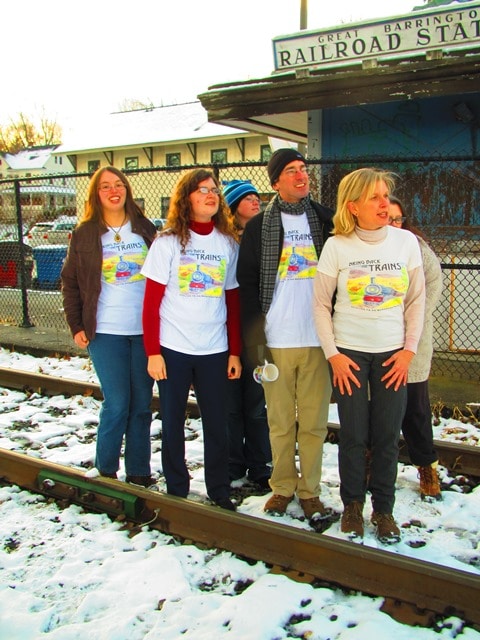 I had no plan to start a campaign when I first wrote about how a beautiful region could attract new 21st-century commerce by being seamlessly connected to an important global hub.

I had recently taken the new high-speed train from Shanghai to Hangzhou, known as the most beautiful city in China, and also the headquarters of major companies like Alibaba and Tencent.

My post generated a big response from people around the world, and by a wonderful piece of serendipity it turned out that, back at home, the Housatonic Railroad had begun talking about reviving passenger service between Pittsfield and New York City via northwestern Connecticut. I wrote another letter about that, and quoted some of the comments I’d received.

I date the beginning of the Train Campaign to the morning a few weeks later when I walked into Bizalion’s and Jean-François greeted me with the words, “I hear that you’re going to get the trains going again.”

Indeed, I could see that modern, fast, safe passenger service would transform the Berkshires in ways that will enhance what we enjoy here now and put us on a path to sustainable growth, prosperity and connection with the world.

By bringing back the trains, we could take a huge step in restoring the Berkshires to vibrant economic health, and integrate the best of its industrial past with the best of 21st-century economic development and environmental sustainability. I could see that the Berkshires could become a model for communities across the world, showing that it is truly possible to think globally and act locally.

But how could I, a publisher and writer, help to make it happen?

It was really quite simple. I did what every new activist seems to do: I started an online petition, set up a blog, and had t-shirts printed.

I even went so far as to get my employees to don Train Campaign t-shirts and pose for a group photo on the tracks—with snow on the ground!

Now, the two-year legislative session has begun, our congressman Richard Neal is chair of the Ways and Means Committee of the U.S. Congress and, in Connecticut, there is a new governor and a new commissioner of transportation with a substantial background in rail.

In Massachusetts we faced a deadline this Friday, Jan. 18, 2019, for the filing of bills to be considered and voted by the House and Senate during the new session on Beacon Hill.

A bill that has huge importance for the future of Berkshire County calls for a study of the economic and environmental impact of bringing passenger train service back to Pittsfield, from both Boston and New York. We’re counting on our Berkshire County legislators, and they need to hear from every one of us. Your voice counts whether you are a voter, a resident, or a second-home owner or renter. Smitty Pignatelli has been asked to sponsor the legislation, and we look forward to his sponsorship and to having the rest of the Berkshire delegation join him.

Clearly, with all these rail options connecting in the Berkshires, we need an assessment of the full impact of new and upgraded service both north-south and east-east. Such a study is essential to making the case for infrastructure investment that will benefit everyone in Berkshire County.

Our objective is a report on the economic and environmental benefits of establishing year-round, multiple-trips-per-day passenger rail service between Boston and Pittsfield and New York and Pittsfield. It should detail economic benefits from the creation of direct and indirect jobs, increased investment and entrepreneurship, access to urban education and employment opportunities, attracting new residents who would continue to work in metropolitan areas, and tax revenues to both the Commonwealth and Berkshire municipalities.

We need cities and we need countryside, and we live in an era in which each can maintain its essential character while we move between them fluidly. Passenger rail service will be a catalyst for economic development without trying to turn small country towns into the big cities. Passenger rail will give city dwellers access to wilderness and to different ways of life, and offer us country dwellers much easier access to the creativity and vibrancy of the city. I’m looking forward to the day when I can say to my business associates in Europe or Asia, “Just go to Grand Central and buy a ticket for Great Barrington.”

Visit www.TrainCampaign.org or write to thetraincampaign@gmail.com to get email links for all Berkshire County legislators.