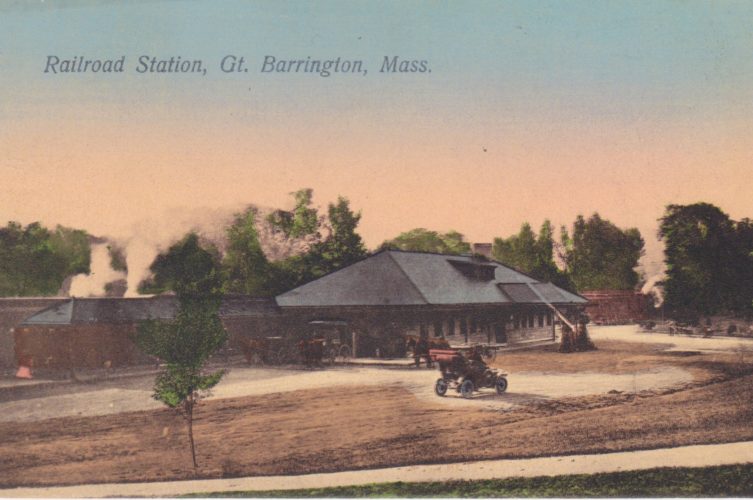 Editor’s Notes: As the Berkshires anticipates the restoration of rail passenger service to the New York Metropolitan Area and the Berkshire Regional Planning Commission considers in what towns — and where in those towns — stations might best be located, here is a little history of Great Barrington depots. This column was prompted by Kim Kimball’s suggestion that the Great Barrington station could be located off Rosseter Street, with the parking lot on property now owned by A.J. Magadini & Son Construction on the west side of the track, with a platform on the east side.  (See the item in last week’s Notes, Footnotes & Queries).

The Housatonic Railroad was chartered in 1836. It began placing rails in Bridgeport, Conn., that year. The line from North Canaan, Conn., opened as far as Great Barrington in September 1842, coincidental with the first exhibition of the Housatonic Agricultural Society. Historian Charles J. Taylor bore witness: “The arrival of that first train is an event to be remembered; it had been expected in the afternoon of the preceding day, and hundreds of people had gathered in the street to witness it, but were disappointed. Many of these, late in the day, were sent flying up Castle street by the shrill whistle of a mischievous boy, blown on his fingers. But the train came, as we have said, the next morning when the villagers were at breakfast, and many ran to the Castle Street crossing to see the sight. Amongst these was Major Samuel Rosseter, who, as the engine slowly approached the crossing, proposed three cheers of welcome, and essaying to take his hat from his head, found himself hatless; in the excitement of the moment, the hat had been left at home, but the cheers, nevertheless, were forthcoming.”

Regular passenger service began between Great Barrington and Bridgeport. The first shipment of freight was two cases of satinets from Berkshire Woolen. Rails were completed to West Stockbridge the following year, 1843, and within two years the line linked with the Western Railroad (later Boston & Albany) at State Line.

The first engine on the local track was an 1839 Baldwin called “Housatonic.” Other early engines included the “Berkshire” (built in 1841), “Litchfield,” “Connecticut” and “Massachusetts,” the “Stockbridge” and “Falls Village,” the “Pittsfield” and “Taghconic,” the “Lee” and “David Leavitt,” the last named for the road’s president, who had a home at Brookside in Great Barrington.

Businesses in Stockbridge, Lee and Lenox bypassed by the original line in 1847 incorporated under the name of the Stockbridge & Pittsfield Railroad to build tracks from VanDeusenville to a junction with the Western Railroad at Pittsfield. The 21.52-mile route was completed and leased to the Housatonic Railroad in 1850.

The original 1844 train depot in Great Barrington was replaced with a new one on the same site in 1872. The old station was moved to the west side of the track to become a freight depot. It burned in 1957. A third Great Barrington passenger station was built in 1900-01. The existing passenger depot eventually became a warehouse, and was destroyed by fire a couple of decades ago.

The first ticket sold from the new station in June 1901 was to Richard Moore, a round trip ticket to New York. The first train to use the depot was the 3:57 that day.

John Viola contracted to build a new railroad turntable just north of the existing one (just north of Rosseter Street) in Great Barrington, the Springfield Republican reported Sept. 5, 1888. “The new iron turn-table that the Housatonic railroad has been putting in is just completed,” the Republican said Jan. 3, 1889. “The new turntable on the Consolidated road is now in use at the roundhouse, and it is now capable of turning the largest engine in operation,” the Republican said, Jan. 20, 1908. This may refer to VanDeusenville.

The first Housatonic depot was replaced in about 1859. In April 1881, a third passenger depot was constructed, the previous one moved north for use as a freight station. Both depots still stand in Housatonic.

The railroad for many years ran a single car back and forth from VanDeusenville station, the so-called “Toonerville Trolley,” according to the late Mary Sachs, who grew up in the village. “Children would come down from West Stockbridge to catch the car to Housatonic for school.” Henry Fuller of Housatonic purchased the passenger depot in VanDeusenville and demolished it in 1940. The land reverted to Trinity Episcopal Church.

The New Haven abandoned 2.6 miles of its line in West Stockbridge to State Line in 1961 (it had been out of service since 1959) and the 6.7 miles of track from Rising to West Stockbridge in 1964. Tracks were taken up, but the railbed is still visible, east of Route 41, a popular footpath. The line through Stockbridge and beyond continues in use for freight.

The last passenger train on the local line ran in April 1971 from Pittsfield to Danbury.