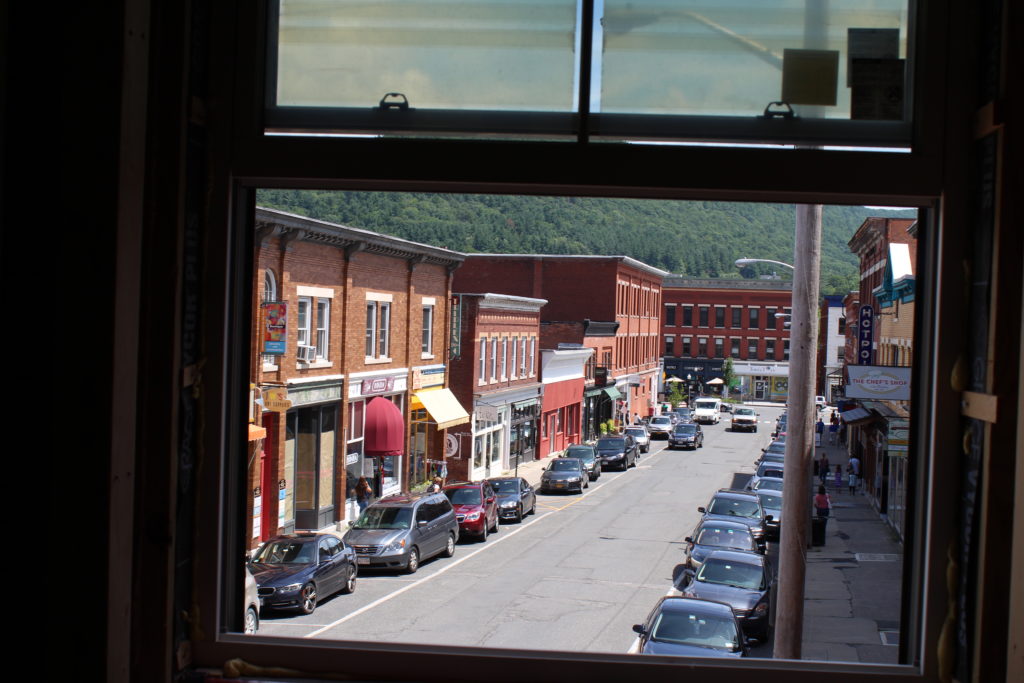 The view of Rairoad Street from a second floor window of the 47 Railroad Street project showing sidewalks on a crowded summer day. Plans are to re-engineer sidewalks and parking in downtown Great Barrington. Photo: Terry Cowgill

Great Barrington — After the disruption and commotion caused by the $6 million Main Street reconstruction, which wrapped up a couple of years ago, the upcoming repaving, sidewalk and infrastructure replacement of a network of core downtown streets should be a piece of cake, planners insist. Work will likely begin in August on Bridge Street, while upgrades to Railroad and Elm streets, as well as the parking lot behind Barrington House, are scheduled for the spring of 2019.

That was the message at an information session on the project this morning (May 30) in Town Hall led by town planner Chris Rembold, project engineer Bryan Ruoff and Sean VanDeusen, who heads the town Department of Public Works.

“In general, this is much less intense than the Main Street reconstruction,” Rembold told the 20 or so residents and merchants in attendance. “Primarily because the rights of way are limited, the funding source is not MassDOT … which gives us a lot more flexibility in what we can do.”

See video below of the presentation by Rembold, Van Deusen and Brian Ruoff, engineer for the project:

“We only lost 100 parking spaces,” Rembold said facetiously to much laughter. “We heard that parking is a problem so we just eliminated all the parking.”

With his lighthearted poke at Great Barrington’s legendary parking problems, Rembold set the tone for what was a very productive 90-minute session on the upcoming project that includes Bentley, Bridge, School, Church, Railroad and Elm streets.

The reality, Rembold said, is there will be some loss of parking spots on Main Street near the crosswalks, where parking spots have had to be “pulled back for safety purposes.”

In addition, the south side of Elm Street will see the loss of six or seven spots between Railroad Street and Carr Hardware. But it’s possible an extra spot could be added to the three on the other side of Elm. And those spots will be striped and better delineated than they are now.

Rembold said engineers also tried to add parking spots at the lot at the top of Railroad Street by restriping but were unable to. Additional lighting at that lot is in the offing, however. Similar repaving and drainage work will take place in the parking lot between Elm Street and the Triplex Cinema, except for a small portion between the Barrington House and the Triplex. which is in private hands.

Decorative lighting will also be installed on Railroad Street, replacing the overhead “cobra-head” light standards. All utilities will be underground and fiber-optic conduits will be buried as well.

Church Street will get a sidewalk extension from School Street past the Iredale building to the back entrance of what will ostensibly be a new 88-room hotel at the former Searles Middle School.

Bridge Street will see slightly wider lanes for bicycle accommodation. Railroad Street’s sidewalks will be wider, mostly on the north side, which is quite narrow. Both sides will be regraded to smooth the existing steep grades. Contractors will coordinate with the developers of the Powerhouse Square project, which is currently under construction.

New curbing will be granite but rounded edge. Veterans of the Main Street project surely recall the sharp edges of the granite curbing installed in 2015. Those curbs caused an epidemic of punctured tires and created dozens of frustrated motorists whose wallets were lightened as a result.

The Main Street reconstruction project included not only sidewalk replacement and removal of the venerable Bradford pear trees so beloved by generations, but the street itself had to be completely deconstructed — torn up down to the soil and bedrock and eventually re-engineered and reconstructed.

The upcoming project won’t be anything nearly as disruptive as that one and, as each section gives way to the next, no one portion of the project will be plagued by the presence of heavy equipment for the same duration as Main Street was in 2014-16.

Rembold said the town expects to send the project out to bid soon. Several years ago the town had received a MassWorks infrastructure grant from the state to repave Bridge Street and portions of adjacent side streets, and bury sections of overhead utilities in the area of the controversial 100 Bridge Street project.

That future site of an affordable housing complex is owned by the Community Development Corporation of South Berkshire and will require significant environmental remediation.

Those projects, except for the utility burial, will continue in time for the MassWorks grant to be used. But for a variety of reasons, 100 Bridge Street has been delayed to the point that the $1 million that would have been used to pay for the burial of overhead utilities was in danger of lapsing when the grant expires at the end of June 2019. So in March, Rembold asked the selectboard for permission to repurpose that $1 million for the upcoming project. The board approved his request.

The $2.1 million Massworks grant that will pay for the project was announced with great fanfare in October 2015, when the state’s Assistant Secretary of Housing and Community Development Juan Vega stood on the steps of Town Hall to deliver the good news along with town and regional officials.

The timetable is as follows (click here for the summary with maps): Bridge Street improvements will start this summer and finish in the fall; repaving, sidewalk replacement and infrastructure work on Railroad Street, Elm Street and the parking lot behind the Barrington House and Carr Hardware will begin in early spring 2019; at about the same time, work will commence on Bentley Avenue and that portion of Bridge Street east of the Housatonic River.

Attendees peppered Rembold, VanDeusen and Roth with questions. They assured merchants who were in attendance that disruption to their businesses would be kept to a minimum.