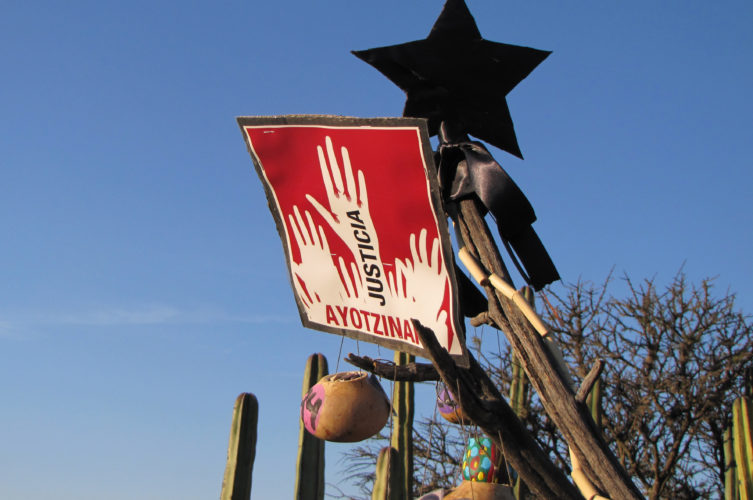 San Miguel de Allende — All gardens contain a message. Unlike pristine nature, they reflect the owners’ vision and sensibility. On many levels, they also fulfill a purpose, even a mission. This is the case today with El Charco del Ingenio, a botanical garden and nature preserve in San Miguel de Allende, Mexico.

Like a private garden a public garden remains a haven. Offering an outdoor space for a leisurely stroll, a meditative retreat, a botanical education, a playground for children — or lovers — and, of course, an optimal environment for plants, birds, and butterflies, such a haven plucks us out of our busy lives. In a way, gardens are meant to offer a reprieve from the madness of our world. However, as I’ve recently discovered here they also work as a reminder.

Triggered by the  tragic Ayotzinapa events in Mexico on September 26 involving the abduction and probable assassination of 43 male, college students, El Charco has installed outdoor works speaking to this very subject.

Upon revisiting the garden this November, I was deeply moved to discover on an open plaza a tall, garambullo cactus from which hung small, painted gourds. Was this a Christmas tree a little ahead of its time? No, this one was prominently displaying a black star and ribbon (typically seen on street doors of homes honoring the dead as well as a red cloth painted with the words Ayotzinapa and Justicia upon white, outstretched hands.

Approaching it, I soon realized that each gourd held a photograph and name of each student seized in the town of Iguala, Guerrero. Many theories abound regarding who is responsible, including the mayor of the town and his wife (now incarcerated), the local and state police, the “federales,” and ultimately the infamous West Coast drug cartel, Los Guerreros Unidos with whom the mayor’s wife has family ties.

Much to the embarrassment of  President Enrique Pena Nieto, both this event and the perceived complacency and laissez faire attitude of the government led to huge demonstrations across the country, including three in this quiet town of San Miguel. Countless cities in the U.S. have also seen demonstrations, most recently in Washington, D.C., during President Pena Nieto’s visit with President Obama. Drawing parallels with “El Norte’s” disturbing issues, Obama mentioned Ferguson.

Back here in San Miguel de Allende, my part-time hometown in Mexico’s central highland desert, I’ve pondered upon such common themes. In both countries they touch on social and ethnic inequality, police actions and people’s reactions. “Both the Ferguson and Ayotzinapa uprisings are not only about bringing cruel and corrupt cops to justice, but are planting the seeds for the future transformation of social power,” explains the journalist, John M. Ackerman.

While El Charco often features art exhibits, many with an environmental message, its recent outdoor installations by its staff, students and community members have reached a more immediate, poignant and political level. As Mario Hernandez, its director says: “This is about justice. We have a responsibility to both nature and people. As a bridge to the community, we are paying attention to what’s going on in Mexico and in the world.”

In town, other signs, acting as vehicles for protest, have also been aplenty. They include a banner (often removed and then replaced) at the Parroquia, the colonial town’s central church. “We will not forget,” is the main message.

Today, a more extensive work is being installed at the botanical garden where rows of painted black T-shirts hanging from clothes lines, greet you along a path with its typical cacti “sentries”: nopales, organos and garambullos.

Its primary organizer is Gabriela Osorio, a young, attractive woman from Michoacan and an art therapist with a Masters degree. “I was inspired by a workshop for a group of veterans with PTSD in San Antonio, Texas, which involved painting uniforms. This led to sense of healing,” she explained.

“After Mexico’s tragic events, I wanted to express the pain, frustration and anger of the people. Fue la gota que derramo el vaso.” (It was the straw that broke the camel’s back).

A Facebook page, “Ayotzinapa SMA” with more than 500 members, enabled volunteers to step forward in creating the installation. Soon to number 50 shirts, their intention is to express additional issues such as the brutality of Michoacan’s drug war; the country’s many disappeared and murdered women, and those oppressed globally.

“Universally, black represents mourning. By displaying the shirts and their messages along a path they can’t be ignored. People have to walk through them. I was particularly touched when I saw children reading the words,” she adds looking at me with her gentle, yet penetrating dark eyes.