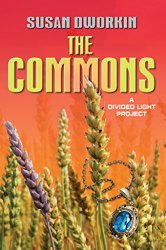 Becket — Around 12,000 years ago, just before the last Ice Age retreated, a period of very cold very dry weather hit areas of the Middle East, killing off most of the wildlife that early hunter gatherers lived on. They were then reduced to eating grasses. Over the next 1,000 years, various grasses crossed and were bred with other grasses and eventually produced the first strain of durum wheat. Today, wheat feeds billions of people and animals around the world. It has ushered in major social changes and has been a vital part of civilization. A global wheat failure would be a disaster that few nations could survive, even for a year.

A resident of Becket, Mass., Susan Dworkin has set her latest novel, “The Commons,” in 2165, is the story of a plague, stem rust, here called EMMY, that is attacking the wheat crops and could destroy the entire harvest on our planet and lead to starvation. And it is the story of the disparate group of characters who stand up to tyranny and work together to defeat the plague.

Wheat rust has always plagued humanity, but has been controlled through the centuries. In Dworkin’s novel, the rust had not been seen in100 years and was not expected to reappear.

The skillful story telling that Ms. Dworkin does so well draws a picture of the society and culture of North America before encountering the plague. With wit and a breezy style, we get to know these feisty, strong, independent characters who strive to be individuals in a tightly controlled and structured society, run by a single Corporation. (The other large nations at this time are The Chinese Empire and The Caliph of the New Ottoman Orbit. And the time itself is called, ominously, The Era of Restored Order.)

The beauty of the book is knowing the characters before the plague strikes. We can, therefore, root for them and encourage their values and independence. Of course, there are characters we don’t like also.

Lizzie Corelli is the 19-year-old daughter of a well-connected and well-respected farming family. Lizzie is nearly 6 feet tall, unusual for that time when so many are short due to lack of nutrients. Her great Uncle Clyde was the scientist who taught each of the 30 varieties of wheat that grow in North America to resist rust. Her grandfather, Eddie Bright, was the weatherman who was “friend of the farmer” before being exiled for criticizing the Corporation. But it’s Lizzie’s 120-year-old grandmother, Foxie Burton Bright, who holds all the memories of the past and her flamboyant career as a singer and restaurateur.

Lizzie has inherited Foxie’s musical talent. Like Foxie, she loves to sing the old folk songs, even if she has to rent them from the Corporation because only songs older than 250 years are free. Some of the funniest, most clever scenes are the concerts in which Lizzie dares to sing forbidden sings and gets the audience singing with her, as Pete Seeger did.

For Foxie’s 120th birthday, the family decides to send Lizzie and the glamorous, still beautful Foxie to a spa in St. Paul, Minnsota, the new capital of North America (which incorporates the northern and southern portions of the northern hemisphere). It is on this trip that Foxie, through their riotous, sometimes dangerous adventures, reveals to innocent Lizzie what the world was really like before the Corporation took over. After environmental upheaval, famine, political revolution, war and a worldwide epidemic, the Corporation came up with a vaccine that saved millions and assumed absolute power.

Dworkin’s sense of humor and liberal thinking shines through Foxie. She uses this revolution to illustrate that when life is unbearable, people are grateful and will support the Corporation and accept its “15 percent deal” (which means the Corporation owns 85 percent of you and all you possess.) There are no taxes; but there are also no choices. Succumbing to security for the sake of peace and plenty instead of war and starvation is a normal human longing — until the realization of what oppression they have succumbed to becomes apparent.

Dworkin does not dwell on the past nor does the reader experience any of the painful 21st century events. In fact, she has Foxie talk longingly to Lizzie, who only knows genetically engineered food, about ordinary times in her life.

“For years and years the weather had been getting hotter…the oceans rose and the beaches around our city began to wash away. We had such beautiful beaches, Lizzie. We would go there in the summertime and eat hot dogs made of real pork and beef with mustard and sauerkraut, that’s real cabbage shredded and pickled and…oh God there were French fries, Lizzie, these long skinny real potato pieces…and we dipped them in this divine red sauce called ketchup…oh God!”

Foxie almost faints. The things we are nostalgic for are so simple, yet so important to our lives.

Dworkin makes use of every event that could occur in 2165 with such relish. People travel in hoverbikes, hoverbuses on hoverroads. They wear computers on their wrists where they receive their Incoming messages. These also appear on bathroom mirrors or bedroom pillows. Most people have been so heterogenized by the 22nd century that racial typing has ceased to exist. Families can have members with skin color ranging from eggshell to charcoal.

Susan Dworkin is an expert on wheat and agriculture, and knows that new strains of wheat rust have been mutating and evolving constantly to overcome unfavorable weather conditions. Her references to the various plagues on wheat over the centuries are true. What makes this novel informative as well as enjoyable is her style of creating an original story with a sense of humor and unforgettable characters. Even the plague, EMMY, becomes a character as she is anthropomorphized into a female who longs “only to stretch down her long red powdery arms and gorge.”

In one sentence about Lizzie’s Tibetan boyfriend, Nikolai, Dworkin lets you know that humans are responsible for what is happening to our planet. “The beautiful fall weather,” she writes, “made Nikolai think that perhaps the earth was forgiving humanity.”

Coming to the end of this truly enjoyable book, one experiences an awareness of how much science fiction is surely and tragically becoming science fact.