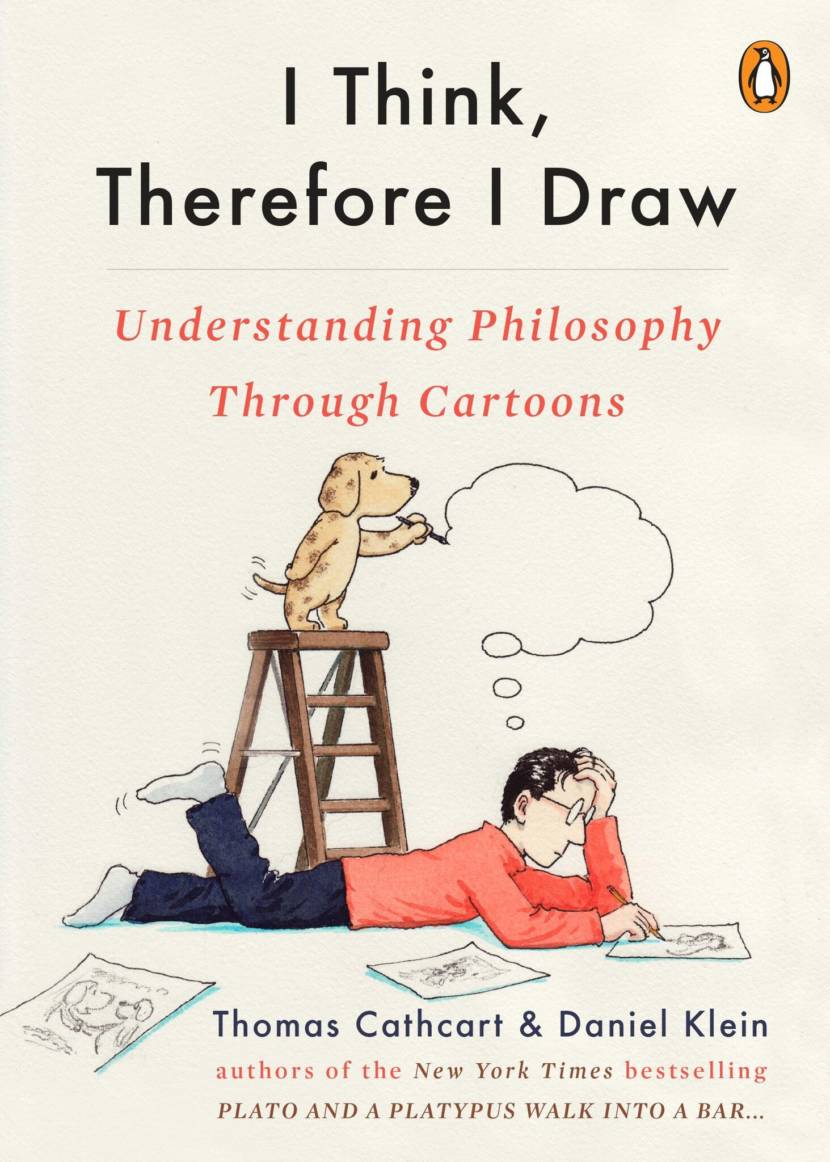 Great Barrington — In “I Think, Therefore I Draw: Understanding Philosophy Through Cartoons,” Thomas Cathcart and Daniel Klein are up to their old tricks. The distinguished gagmen have been cracking serious philosophy jokes since they were classmates at Harvard in the 1960s, and they give signs neither of curtailing their wit nor moderating its wickedness. Cathcart and Klein have authored a number of books together over the last ten years or so, most notably “Plato and a Platypus Walk Into a Bar – Understanding Philosophy Through Jokes,” a  New York Times bestseller that in 2007 earned the graying theoreticians a prominent place in the world’s pantheon of great twenty-first century comic philosophers from smallish New England towns west of the Housatonic River. (No kidding: The book has been translated into 26 languages.)

In “Plato and a Platypus,” the venerable graybeards proved once and for all that philosophy isn’t only for depressed old men. (Depressed old women make good philosophers, too.) Their favorite trick (the one they’ve lately been up to) is to transport ordinary laypersons into extraordinary states of wizened enlightenment without the aid of service dogs or mind-altering substances. This feat often requires more than the application of conventional scholarship. Sometimes only a joke will do, and throughout “I Think, Therefore I Draw,” humor does quite a bit of the heavy lifting.

And there is much to lift. These two lovers of wisdom would like everyone to know that philosophy is far more than an antiquated collection of incomprehensible precepts cloaked in arcane epistemological nomenclature. Philosophy also happens to be a subject students can major in when they haven’t the remotest clue what to do with their lives. More commonly though, philosophical inquiry helps us solve the kinds of problems we face when contemplating the great mysteries of life, the universe, and everything. Whether we realize it or not, timeless philosophical precepts underlie our every thought, choice, and action. But which precepts?

That’s just the question Messrs. Cathcart and Klein were hoping you would ask. Because they have answers. Not necessarily correct ones, but certainly answers of the kind that will encourage you to acknowledge your ineluctable obligation to exercise the God-given gift of free will that was stamped indelibly into your and Jean-Paul Sartre’s DNA countless millennia before either of you were born. Thus, you are free to choose the system of incomprehensible theories, paradoxical maxims, and death-defying dicta most appropriate to your own circumstances. (The authors leave it entirely up to you to discover whether free will is predetermined or not.)

In contrast to many of the philosophers they have studied over the years, Cathcart and Klein get their kicks by making philosophical literature as comprehensible as possible. Thus, while others gleefully obfuscate (sometimes to the point of gaslighting), these guys endeavor to illuminate. And, against all odds, their approach works, not only in theory but in practice. In this way, they are able to bring (a semblance of) order to competing schools of disparate philosophical thought. But they do something else that is just as important: They let us off the hook whenever the discussion gets so bizarre and convoluted that even they begin to complain of cognitive disequilibrium (a k a cerebral vertigo). What they do not do is pretend to understand stuff (including cartoons) that they simply don’t get. For example, a cartoon by Bradford Veley brought this response: “It made us laugh, although, when we thought about it, we weren’t sure why.” Good to know! And how about this reassuring confession: “Derrida confuses us to the point where we aren’t sure if we really grasped what originally struck us as a perfectly understandable little pictorial gag.” (They eventually figured it out and wrote their own perfectly understandable explanation.)

Another thing they don’t do: Despite their manifest affection for Latin verbs and funny hats, these writers never pontificate. Not even when they probably ought to. But their reluctance to sermonize is exactly what we should expect from a couple of guys who consider themselves neither infallible nor celibate. Besides, both of them look silly wearing a mitre.

Probably the single most important thing the authors do not do is try to make people feel stupid. They want their readers to know that half the fun of studying “big time grumblers” like Arthur Schopenhauer is in gleefully pointing out the obvious absurdity of their most ludicrous assertions. (This can be a real blast of fun, like watching footage of the Hindenburg disaster.) The more bleak your views, the more laughter is required to counteract your existential panic. (Kind of like those little Szechuan “peppers” that numb your mouth so you won’t experience quite as much pain when the hot peppers come along to incinerate it.)

Philosophy isn’t generally considered a laughing matter. But to these practitioners, joking is serious business, not only because laughter eases suffering, but also because the deepest meaning of esoteric ideas is often inaccessible without the aid of a few chuckles. “Jokes,” the authors report, can make “a devastating point while defusing anxiety at the same time.” Their job is to transform the humble straw of earnest human inquiry into the precious gold of actionable insight. But, of course, not all humorists take their jobs as seriously as Thomas Cathcart and Daniel Klein do.

“But,” you may ask, “what if I’m not in the mood to laugh about the tragic absurdity of my insatiable strivings or the appalling nothingness of . . . nothingness? What if I just want a wafer-thin smidgen of information on about five dozen philosophers I’ve never heard of?”

Then you’re in luck, because the authors have included, at the end of “I Think, Therefore I Draw,” a highly useful “Biosketch” section where you can cut directly to the chase and get the succinct facts on any of the philosophers mentioned earlier in the book. (Just don’t expect this section to be a joke-free zone.)

“I Think, Therefore I Draw” is easy to pick up. Not so easy to set down. Each cartoon is followed by a few paragraphs explaining how the drawing illustrates (intentionally, or not) the ideas of one particular philosopher, of which roughly 64 are introduced in the book’s 320 pages. One of them is Bertrand Russell, who famously wrote, “Through the greatness of the universe which philosophy contemplates, the mind also is rendered great.”

As Messrs. Cathcart and Klein say, “Thus does philosophy illuminate our world.”