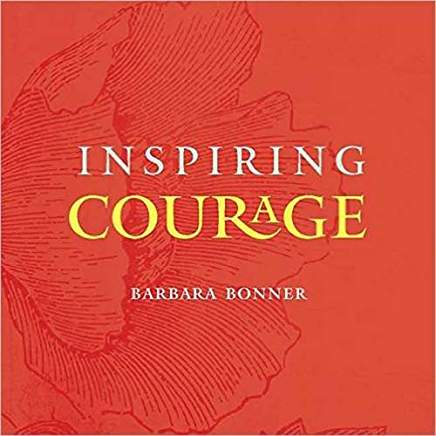 Buddhist thought, study and practice have become quite central to author and Housatonic (Mass.) resident Barbara Bonner’s life. Her books on generosity and courage explore qualities nearly everyone aspires to, although the author is quick to point out the unobtrusive nature of the often pivotal moments when they prove inspirational. So it is the “reflective nature of life…[and the] contemplating [of] these qualities of character” that is the genesis of Bonner’s foray into the writing life. For Bonner, who has had a home in the Berkshires for 25 years, the exploration of these two topics represents “a great intersection of [her] own public and private self.” Of her new book, “Inspiring Courage,” Bonner declares it “a collection of some of the most powerful inspirations I have encountered about what it means to live a courageous life.” A brief discussion of etymology sets the tone very early on in Bonner’s book; the word “courage” derives from the Latin “cor” — which is both the root of “coeur” in French and “cuore” in Italian — meaning “heart.” It is a logical progression, then, that her collection of 130 quotations, 30 poems and 13 stories delves into the questions “What is it to act from one’s heart? To live from one’s heart?”

For Bonner, whose new book follows close on the heels of her first, “Inspiring Generosity,” the subjects are rife with connectivity. She says, “all the lessons of generosity are very much alive in this exploration of courage…what interests me most is not a single spontaneous act but rather a life that is lived in a new orientation.” Bonner goes on to note, “When we experience an unexpected burst of generosity, it quite often changes us forever, leaving us standing in a new place, in a new orientation, with little appetite for going back to our former life.” The same can be said for courage. She notes in her introduction: “There is great courage in living life to the fullest, living with authenticity and a sense of alignment with one’s most deeply held values.” In this way, she very deliberately culls the stories of “heroes,” all of whom reflect her commitment to telling the stories of those living courageously albeit quietly.

It did not go unmentioned that Barack Obama was the 2017 John F. Kennedy Profile in Courage Award recipient on Sunday, May 7. Bonner was quick to point out that, as Americans, “we lived with this courageous man for eight years and, while some of us took him for granted, we are not taking him for granted now.” As the powers that be in Washington threaten to pull Obamacare and access to affordable healthcare for millions of Americans is at risk, Bonner articulated what makes Obama courageous: “Authenticity, being clearly true to his values, being outspoken about them, wanting to step forward and take a stand often when it was not popular.” It is this type of elegant authenticity, despite being in the proverbial limelight, that makes the former president what Bonner considers “a fantastic model of courage.”

How do we become inspired? What inspires us? For Barbara Bonner, this exploration “started out as a big mess in the early days” of writing her book. As the project gained steam, her overwhelming “desire to offer up these moments inspired the format of the book.” She went on to remind us, “courage can be anywhere.” And, as is most often the case, the most generous and courageous among us tend to deny it lest we draw attention to ourselves and appear boastful. Bonner, who certainly never intended to write a series, is two-thirds of the way through her third book–the subject of which, well, she politely declined to divulge. Another such moment to divert recognition and espouse graciousness.

Bonner is currently ensconced in a 10-city book tour; when she and I spoke, she was in Kansas City en route to St. Louis. While she joked that she felt out of sorts being in a “red state,” she will soon return to the region for two events in the Hudson Valley: Bonner will be signing copies of her new book, “Inspiring Courage,” on Saturday, May 20, at the Millbrook Literary Festival; on Sunday, May 21, at 2 p.m., she will present a book talk and signing at the Chatham Bookstore, 27 Main St., in Chatham, New York. For more information, or to purchase a copy of the book, visit www.inspiringcourage.org.