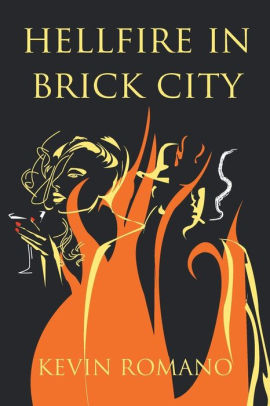 BOOK REVIEW: ‘Hellfire in Brick City: A Novel of Morality and Mortality’

“Hellfire in Brick City: A Novel of Morality and Mortality” by Kevin Romano of Lenox, is noir writing in all its grit with slippery characters and an all-too-human protagonist who investigates strange events and murder by the New Jersey River. Private investigator Frank Soldi goes deep investigating corruption, murder and romance so relentlessly the reader wonders if he will accidentally fall off the razor’s edge of his activities and get whacked by the mob, or maybe be destroyed by his love for the wife of one of the major players in the story and fall to the bottom of a bottle of bourbon. This classic noir story of murder, organized crime and a nosy PI who can’t avoid the femme fatale (even if he can’t trust her) stays very edgy throughout without getting smarmy. For noir fans, this is a satisfying walk around town with all the usual characters such as the dependable secretary, Lou (Louise Lawless) who has a heart of gold; a trusted friend and reporter for the Press in Atlantic City, Larry (Lawrence Grimes) who she’s sweet on; and varied tech supports downtown who know how to get the info and deliver the goods. There is even a delightful street-person spy, Charlie Brown, who opens up a lot of what is going on at the scene.

Frank Soldi is intrigued by Larry’s environmental story about the mystery of strange fires on the shore of the New Jersey River for which there is no explanation and he has plenty of questions. When three of Frank’s “solid contacts” down at the police station say the death of a toxic waste disposal professional Clinton Darby is likely murder, Frank is swallowed up into unraveling this mystery–partly to watch Larry’s back because his stories are putting pressure on whoever is illegally dumping toxic waste–and he begins his own investigation. He is convinced by Larry that the environmental issues are important and, as a PI, the human angle involvement is Frank’s specialty. He needs to find out what’s going on and stop it somehow.

The fires lead piece by piece into a world of close-mouthed, no-paper-trail, seamless carting around of goods by people who make a lot of money transporting illegal stuff in bulk. Frank visits his long-time associate and maybe friend, Dante Donatello, at Dan’s Double Deuce, a small-time casino off the Atlantic City boardwalk. Dante, of course, has a side business fencing anything and everything. What unfolds is that Dante has gotten in too deep with a larger mob operation where they buy polluted land–some of it already polluted by barrels illegally dumped by Dante who is paid under the table by firms in Newark (Brick City)–and then get federal money to clean up the toxic waste sites. The process can go on indefinitely until they finally sell the land for another profit. The problem is literally illuminated when one of these illegally dumped chemicals (picric acid) has the unusual property of actually exploding into a fire ball when it hits water. When fires erupting along the river are noticed, the whole story begins to get complicated for all concerned. Frank and Larry decide they need to do something and they are at the front lines where nobody seems to know what is happening.

Frank soon finds himself feeling responsible for environmental issues and falling in love with a dubious but sophisticated beauty, Barbara Collingwood, who is married to one of the pivotal characters associated with the mob: Collin Collingswood. Collingswood is convinced by mobsters to run for senator to gain influence and more access to ill-gained federal funds. When Frank employs the street person, Charlie Brown, who often sleeps near the river, to spy on the mob operation Explorations Unlimited and Charlie Brown is murdered, Frank is all in to solve the mystery and stop the mobsters.

Noir mystery stories can end either way: A happy resolution of completed missions and justice and order, or a disastrous descent into evil and destruction balanced on a wry smile. It would be unfair to say how this novel ends before the reader has had a chance to get involved personally, but this story does build to a potential fireball and the climax is at once unpredicted and perfectly crafted. Every turn of the page is an intriguing mystery of genuine noir.