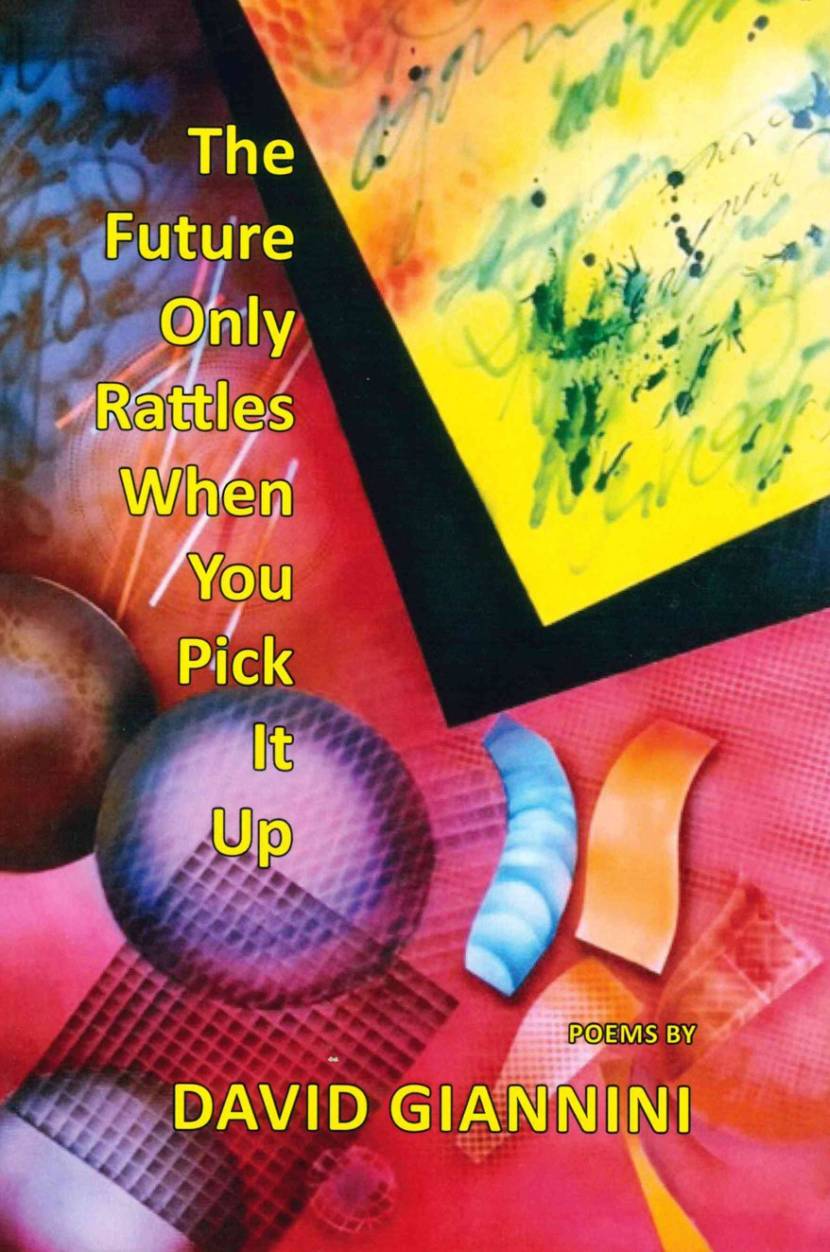 The Future Only Rattles When You Pick It Up

Becket — David Giannini’s latest volume of poetry, aptly titled “The Future Only Rattles When You Pick It Up,” is a compilation of poems that, to quote the poet, “all bear relationship with each other.” He also makes clear that “it is a book and not just a smattering,” the content of which carries allusions that run the gamut from Greek mythology to Emily Dickinson and myriad topics in between. The beauty of the natural world, echoes of which linger from Giannini’s “Faces Somewhere Wild” (2017), collides with politics, technology, philosophy and iPhones in a collection that is at once both soothing and provocative. “What/if, with Sisyphus,/toddlers were forced to roll/small stones beside him/on the long push uphill…all of them compelled/to repeat their acts forever?”

Irene J. Willis, in her endorsement of Giannini, shares this sentiment: “’The Future Only Rattles When You Pick It Up’ is one of a kind. There is nothing like it, and no one’s voice or thought is like his. Witty, wise and wonderful, some of these poems are downright hilarious.” The editor of the anthology “Sigmund Freud in Poetry” declares, “Every once in a while, [Giannini] looks out at us from the page and tells us a bold truth straight on, without humor but with infinite understanding of himself and his place in the world.”

Both of Giannini’s latest works, “The Future Only Rattles When You Pick It Up” (2018) and “Faces Somewhere Wild” (2017) are published by Dos Madres Press. Founded in 2004 by Robert J. Murphy, Dos Madres Press is dedicated to the belief that the small press is essential to the vitality of contemporary literature as a carrier of the new voice and new works by established poets as well as the older, sometimes forgotten voices of the past — and in an ever more virtual world, to the creation of fine books pleasing to the eye and hand. In a recent interview with Dante DiStefano, Murphy spoke at length as to his admiration for Giannini’s work, citing “his wonderfully eccentric intelligence, his ability to surprise, his quixotic perception, his fine ear, his wonderful eye in observation of nature, [and] his ability to hear all the possibilities in a word in association with others” as colliding to “create a poetry that gets up on its hind legs and howls.” Murphy goes on to note that Giannini allows the reader entry into “a world that for many of us is in want of reintroduction – as if forgotten, but always wanted, always yearned for, always waiting to be remembered, that lives trembling with invisible, anticipatory recognition for us there.”

Below is an excerpt from an interview with Dante DiStefano that appeared as part of “The Best American Poetry 2018” (http://bestamericanpoetry.com) and appears here by permission.

Dante DiStefano: You’ve had eight books published in the last three years. This is amazing by anyone’s standards. How do you write so prolifically?
David Giannini: I’ve said and written that poetry is daily and not merely some subject to be studied in a classroom or a lesson with given “prompts.” I have always enjoyed what Mallarmé said: “Poetry is not made with ideas; it is made with words.” I very rarely start a poem with a concept or any sort of preconceived notion. A word or phrase or image comes to me, and I try to ride the crest of an inspiration and craft a poem usually through many drafts. I am always working at writing. I discard a great many false starts, whole drafts, or just wrong-headed ways of wordy work. All writers do that. I rise at 4 a.m. most days, jot and/or revise immediately, sometimes in a more or less liminal state, between dreams and waking. There are words and/or images, as I said, already knocking around in my head, waiting to be said or typed into my computerized journals and drafts. I work for several hours until my wife gets up, and most days I am working on several drafts at a time throughout the day, nearly every day. On any given day, I may go out and stack cordwood or go to a dentist appointment, poetry reading, etc., but lines of poems I am working on stay with me and I often jot things in my car while driving. Before cellphones there were drivers scribbling on pads or napkins beside them in the car. It is all a matter of persistence, discipline, and long love for what I must try to accomplish. I have the feeling, the sense, every day when I wake, of rising into poetry.

DD: Beginning with the title, tell us about “The Future Only Rattles When You Pick It Up.”
DG: The title comes from a prosepoem (as I spell it) in the third section of the book. It is the last line or sentence of “Returning Gift.” Some people have told me they use that line as a sort of aphoristic mantra sometimes. The book is divided into three sections. The first section contains relatively short lyrics, some with deadpan, absurd humor, and even a line riffing on Whitman. The middle section is a suite of 10 poems for my wife, Pam, tracing our relationship, how it began, and the sense of how there is “third being formed from tones of talk we fuse,” not a child, but what the marriage deeply is. I speak, in all of those poems, in somewhat oblique terms, feeling and intuitive terms, taking Emily Dickinson’s cue in “Tell all the truth, but tell it slant” as epigraph. Some things are more truly revealed when seen at an angle, rather than looked at flat on. That section continues in lyric tradition. The third section is composed of prosepoems. They, too, are anchored in lyricism, but also in metaphysical and comedic circumstances. There are thematic, lyric, and metaphysical-spiritual elements in this and the previous two sections that call to each other, back and forth, throughout the book. At the same time, so much of life is comic and absurd, tragically so. There is not enough meaning in life without poetry, without attempts to find meanings not obviously present every day.

DD: The third section of “The Future Only Rattles When You Pick It Up” consists of “Vertical Prosepoems,” a designation that characterized the poems in another one of your recent books, “Porous Borders.” Can you explain what you mean by a “Vertical Prosepoem?”
DG: I call them Vertical Prosepoems to call attention to their relatively narrow (3”, left-to-right) margins that force a reader to break into the next part of a sentence more quickly than in normative prose paragraphs. It is a way of focusing attention or concentration more sharply. I am calling the reader’s attention to something resembling prose, with ‘justified’ margins, yet with a sense of the narrow linearity of most poems, especially lyric poems. The prosepoem allows for more expansiveness and flexibility, but is “held” in its visual shape that is both complement and offset to its internal structure. Here I pause and say it’s not good to intellectualize what is essentially an organic process of “making.” I usually pay close attention to the sonic elements, the “music” as some still call it, such things as internal rhymes or repeated sound patterns, for instance, within the rectangularly upright prosepoem on the page.

DD: Who are the contemporary poets you admire the most?
DG: I don’t like to even imply hierarchies. I’ve learned to appreciate a wide range of people and their ways, of poems not at all like mine, but ones that may succeed beautifully on their own terms. I enjoy reading and exploring, for instance, Elizabeth Willis as well as Irene Willis and Williams Hunt (the latter two are terribly neglected!) Andrew Schelling, Lewis Warsh, and lately I am enjoying more of Sarah Sousa’s, Charles Rafferty’s, and Xue Di’s poems and prosepoems. I have very little use for urban poets and poetry that often seem to live too far up in their heads, away from the body and its senses. As usual, though, exceptions prove the rule. Some poets, like Warsh, are able to bridge, it seems, a sense of urbanity with a sense of the rural. Octavio Paz once referred to “the lacerated speech of the big cities.” I’ve always admired what Gertrude Stein once wrote, “Civilization is always rebeginning in the country.” Yeah, man! That’s a very contemporary idea! I also still have a lot of love and respect for Gary Snyder’s work as a whole. Same for Susan Howe and Jean Valentine — all wildly different poets!

DD: Whose work do you return to the most?
DG: In poetry, the dead: Tomas Tranströmer, Henri Michaux, Rene Char, Zbigniew Herbert, Emily Dickinson, and Laura Riding, all early “influences.” But as Louis Zukofsky once said, “Influence is literally in the air.” All is of influence, every thing and every phoneme — Everything!

Wind. Dry
stalks—
I am

grateful for
this
raw

music, for
what is
missing, for

what has
been
eaten

away, for
these
slaps of

leaves, this
old
family, most

shaking to
the same
rasp.