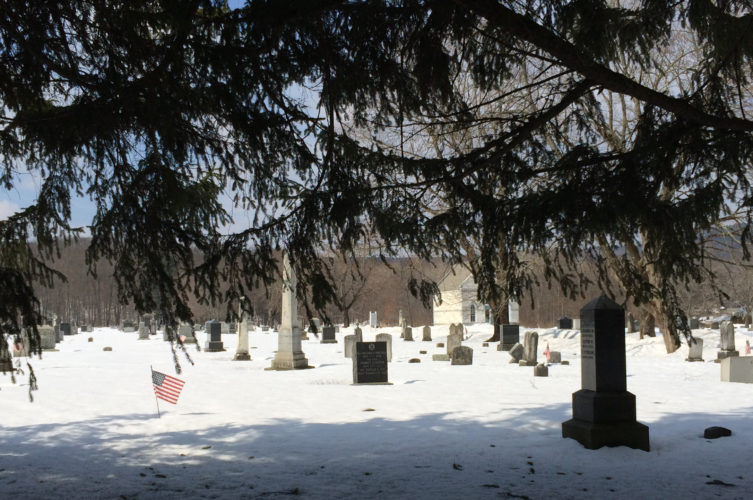 Housatonic — If I have to think too hard to write about something, it’s probably not what I should be writing about it all.

Five or six slam-dunk, can’t miss, pieces loiter in their files in my documents folder. I may be able to use parts of them, sometime, someplace, but the bulk of the words will vanish the next time I get around to deleting all the trash accumulated there.

So it seems a better idea to write about what’s been playing in my mind: My mother’s funeral.

It’s a short trip from any remaining church in Housatonic or Great Barrington to the cemetery on Oak Street.

But then according to your way of thinking, your faith or lack thereof, it’s either the last short trip at the end of a long journey, or a flowery sendoff to an eternal trek and permanent residency either in the land of milk and honey or the flames of perfidy.

Only when my sister-in-law from Florida remarked on some graves from the early 19th century on the Van Deusenville side of the graveyard, did I notice history in the cemetery flows from east to west like the rising and setting sun.

Each passing aisle of graves is a page in a book. It might read like a mystery to people from away, but for someone who can read each page, there is history and memory, melancholy and remembrance. There might be a tear in one sentence, a fond chuckle in the next. Our family plot, the cause of angry debate and long periods of estrangement over who’ll get what spaces which remain, is somewhere near the middle of the book.

But there are a few paragraphs you can’t read it all. Some stones, many crusted with lichen, stand carved with the old names. They stand shoulder-to-shoulder with others about whom you know nothing. The dust buried in these spaces is anonymously human, names not to be found in your own index of memory. There are flags to the veterans on some, flowers on others, and a few with both. Some sit alone in silence for eternity.

Most of my friends, when we talk about such things, want to be cremated and have their ashes scattered on a favorite beach or golf green. Some of us want to be thrown into the wind from Flag Rock to meander back to inevitable earth in their time.

Since there’ll be no marker, no names carved into large blocks of stone, will we be quickly forgotten? Or will we become fond actors in “boy-he-was-one-of-a-kind” stories around the Thanksgiving dinner table?

Will we be granted, either for our goodness or infamy, a place in some rich oral history as men were in the days before stories were written? Only uncertain and fickle memory will dictate what we were and where we might’ve traveled for all this time?