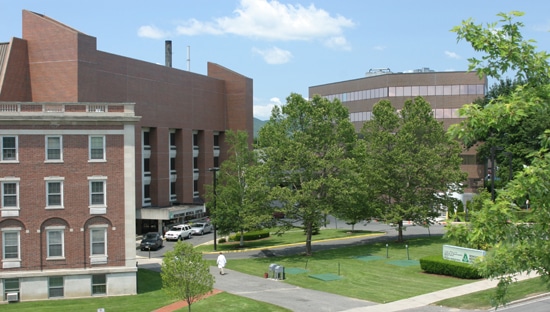 Pittsfield — Berkshire Health Systems does not have enough testing kits for COVID-19 and has been limiting tests only to exposed staff and those in the community who exhibit specific symptoms for the virus. In addition, BHS hospitals need more ventilators, a BHS doctor said Tuesday.

“We don’t have as many test kits that we’d like to have,” Dr. James Lederer, chief medical and chief quality officer of Berkshire Health Systems, said in a virtual town hall meeting with Rep. Richard Neal, D-Springfield, Tuesday afternoon. Lederer added that BHS would “probably have about two weeks’ worth” if the hospital was not careful about how many tests were conducted.

Of the test kits, Lederer said Quest Diagnostics is supplying some kits to BHS, which includes Berkshire Medical Center in Pittsfield and Fairview Hospital in Great Barrington.

Neal held the town hall only a few days after President Donald Trump signed the so-called CARES Act, $2-trillion stimulus and relief bill designed to mitigate the effects of the economic devastation brought on by the deadly virus that has caused millions of businesses to scale back operations, lay off employees and, in some cases, shut down altogether.

This is the third aid package passed by Congress to keep individuals and businesses afloat during the crisis. Click here to listen to an audio recording made by The Edge of the town hall meeting.

“We’re doing what we can in these next few weeks,” Lederer said.

In New York, Gov. Andrew Cuomo has said his state needs about 30,000 more ventilators, an assertion disputed by Trump.

Lederer added that shortages of ventilators are to be expected since the machines are expensive — too expensive to put into storage for use in an emergency.

“People don’t build a $50,000 machine and put it into a warehouse,” Lederer explained.

One Lanesborough resident who called the town hall meeting insisted that BMC employees do not have enough masks, and that “some have been in contact with infected people but they can’t be tested at this point.”

Lederer insisted, however, that test kits are available for employees who have been exposed to infected patients. He did not say how many. However, an internal memo from earlier this month reportedly said 180 BMC employees were furloughed for quarantine after being exposed.

The Massachusetts Nurses Association, a labor union representing nurses at BMC (but not Fairview), called Monday for stronger personal protective equipment standards for frontline nurses and health care workers and a triage area outside the hospital to limit the exposure of COVID-19 to patients, staff and the community.

The union also said 97 BMC nurses had been furloughed and instructed to self-quarantine after potential exposure to COVID-19 as of March 28. All were exposed without PPE. Of those, 75 of the nurses do not work on units designated for COVID-19 positive or COVID-19 rule-out patients.

MNA also called on the hospital to acknowledge “a looming shortage of PPE and [commit] to universal N95 masks for frontline staff [that] would prompt additional donations of equipment. A local company is already preparing to manufacture N95 masks.”

BHS spokesman Michael Leary disagreed with MNA’s news release, especially its assertions about the N95 masks, which he said were “considerably in error.” Click here to read the statement he provided to The Edge. Here is the excerpt about the masks:

“Unfortunately, the MNA’s calculation of the burn rate of existing N-95 masks, if used for all who have any contact with any patient, is considerably in error. They claim Berkshire Health Systems would have a 28-day supply if all staff with any patient contact wore them, but in fact the burn rate would see us run out of N-95 masks in nearly two weeks, with a highly uncertain ability to rebuild the stock and maintain that level of usage.”

At Fairview, a tent has been set up outside the emergency department but was erected weeks ago and used for a small number of COVID-19 tests prior to BHS establishing a larger testing site in Pittsfield. The Fairview tent is no longer being used for testing, according to Leary.

Tiny Fairview has 25 beds and sources have told The Edge the hospital is trying to double that capacity. Leary, however, indicated that BHS was not actively pursuing that goal.

“Fairview, under its license, has the capability, during a potential surge, to expand its bed count from the current 25 to 50,” Leary said. “While the hospital is doing surge planning in that eventuality, it does not currently have 50 beds in place, but can do that if needed.”

According to Great Barrington health agent Rebecca Jurczyk, DPH has advised towns against publishing the towns of residence of the confirmed cases because of legal and privacy concerns.

Both Jurczyk and selectboard member Ed Abrahams confirmed that for most of last week, Great Barrington had only one confirmed case, but DPH reported five new cases Wednesday afternoon, March 25, for a total of six.

In addition, Bard College at Simon’s Rock in Great Barrington announced on its website on March 23 that an employee had tested positive for COVID-19, the first such case reported at the early college. It is not clear whether the employee lives in Great Barrington.

“The employee has been self-isolating at home for two weeks and reports they are feeling much better,” the statement said. “We wish them all the best as they continue to recover.”

The statement also said that Berkshire public health authorities, in coordination with Simon’s Rock, will be reaching out directly to anyone who may have been in close contact with the employee. College officials may ask those individuals to self-isolate and maintain contact with health department officials.

Back at Neal’s town hall, Lederer fielded a number of questions from callers on subjects ranging from wearing protective gear in public to whether cooking paper currency in a microwave oven would sterilize it (it might work, Lederer said).

Neal was eager to talk about the $2 trillion stimulus bill, which includes almost $900 billion to businesses small and large, $560 billion to individuals, almost $440 billion to state and local governments, and more than $153 billion to hospitals and “public health.”

“I want to thank our health care workers for their very hard work to help prevent this virus and diagnose cases,” Neal said. “Health care workers are being pushed to their limits. They need more masks, beds and ventilators, and the CARES Act will go a long way toward doing that.”

Of aid to individuals, Neal said: “Families need benefits that will allow them to meet expenses. We need to make sure people have a cash flow.” Neal added that he expects there will be a phase-four legislative measure, though was not yet entirely sure what it would contain.

The checks start to phase down after that and disappear completely for people making more than $99,000 and couples making more than $198,000. Click here for a handy list of FAQs from the New York Times. Treasury Secretary Steve Mnuchin said Monday that Americans can expect stimulus checks to be direct-deposited within three weeks.