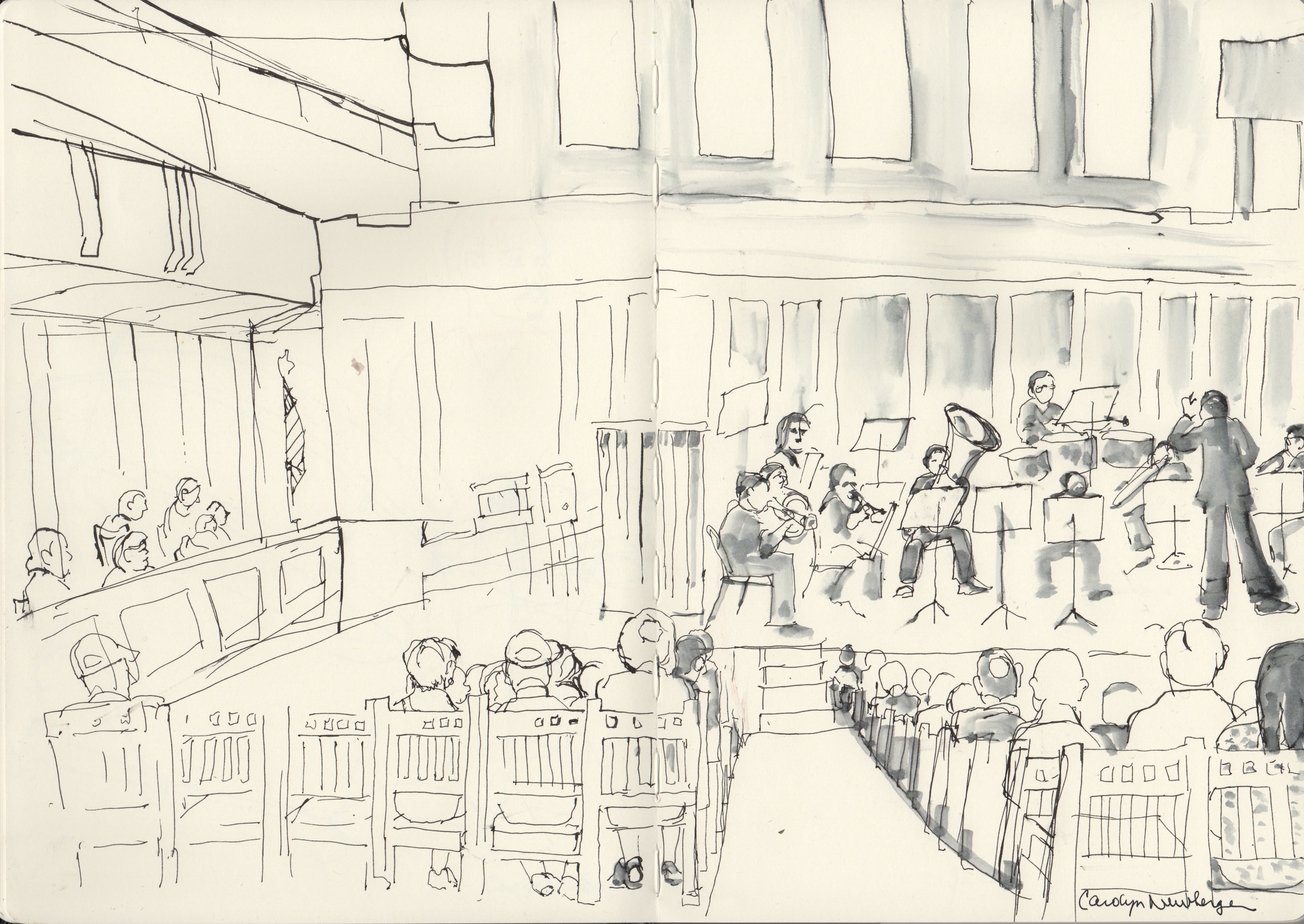 After two days of splendidly satisfying music to commemorate the opening of the new Tanglewood Learning Institute, one would think that a 10 a.m. program at Ozawa Hall on June 30 might offer a calm path to clear one’s head. But this was not to be. In contrast to previous years’ iterations of the annual “Brass and Percussion Spectacular,” this was no walk in the park, with readily accessible, mostly pleasant ear candy for the fans of the musicians too rarely given the chance to strut their stuff on the Tanglewood stage.

Rather, here was a morning of provocative musical offerings and ear-rattling virtuosity, leaving the listener to wonder from minute to minute, “How is that even possible?” and “How come I never heard these guys?”

In Detlev Glanert’s “Concertgeblass” for (for five horns, five trumpets, four trombones, tuba and percussion including one jazz trap set), Nathan Aspinall of Queensland, Australia, conducted with a vivid sense of swing.

The piece begins and ends with a craggy dissonant chord and its winning, clear narrative structure proceeds through sectional solos, conjuring the layered motions of the sea, with trumpets cooing into wah-wah mutes, fabulous finger-snapping big-band riffs, a warm and punchy trombone choir hitting a looping boogie-woogie ostinato that the French horns adorn with shrieks of bluesy delight. In the end, there’s a tip of the hat to Leonard Bernstein in a charging phrase reminiscent of the “West Side Story” suite.

Tuba player Ole Heiland was all over the piece, pulling from his F horn—a relative peashooter next to to his monster B-flat that he used later in the program—strong foundations to the block chords and driving, sinewy counterpoints.

Also remarkably, tuba fellow Heiland juggled his F tuba, a 2-gallon-sized mute, and his BBb tuba in seconds to synchronize his sonority first with the French horn in a nuanced row—creating the sound that Richard Wagner had in mind when he scored his Wagner tubas with the French horns in “Die Walkure”—then twirling his monster horn onto his lap, giving an ineffably trombone-y foundation to a choir of his low brass neighbors, then reaching upward in a seamless, achingly beautiful arching series of phrases.

The world premiere of Scott Lee’s striking TMC-commissioned work “Slack Tide,” a contemporary tone poem, evoked the moments when the tide is coming neither in nor out, moments both of calm and maximum tension. With its harbingers and nuances of movement, one sensed and felt the creatures of the sea lurking, floating and darting through the waters. We’ve never heard anything like it and, along with Lee’s wildly responsive audience, loved it.

Lindberg’s “Ottoni” begins with a devastatingly simple three-note motif, tossed from the trumpets playing identical cup mutes to the horns to the bass trombone, and then like a flash, they’re off to the races in sweeping, polyphonic strokes of phrase, led by Hardenberger expressively, knowingly, and authoritatively and precisely. There wasn’t a single audible error in the technically challenging performance, replete with jazzy harmonies and linear inventions, huge block chords with ninths, 11ths and 15ths, and a host of articulational acrobatics, from flutter-tonguing to stretching the embouchure from the pedal range of the horns to the high register.

Pride of performance in the Lindberg fell to trumpeter Morgen Low. She signaled to the band the runs and staccato stutters that followed her statements and then circled back and commented on them with a playful sense of gossipy chatter. Her solo cadenza was an unforgettable display of relaxed timing and dazzling technical mastery, pulling from her long-valved horn that resembles a cornet a fat, centered, gorgeous midrange tessitura.

The single percussion work on the program, “Peaux (Skins)” from Iannis Xenakis’ “Pleiades” featured six percussionists arrayed across the Ozawa Hall stage behind nearly identical kits that included a kettledrum each along with timbales, congas, snare drums and crash cymbals. In two of the kits, one on the far right and one on the far left, a large bass drum was suspended horizontally. The skins were pounded with a variety of implements, from thin drumsticks to big mallets. In the end, the bass drums were hit softly and then hard with felt hammers, and the hall pulsed with low frequencies and propelled air. Especially for those of us in the first rows, the entire piece was a visceral experience, a marvel of unconducted coordination made possible by eye contact and careful counting across the distant separations of the players.

The most impressive sonorities came when the bass drums and tympani were struck alternatively in rising crescendos and diminuendos, and at the end, when there came a foreboding evocation of a thunderstorm, shifting from stage left to stage right like a staggering “Baba Yaga” in Mussorgsky’s “Pictures at an Exhibition,” with bass drum blasts that shook the listener to the core.

This was no walk in the park for anyone, but we wouldn’t have missed it for the world. Emotionally, intellectually and esthetically provocative, it was a veritable masterclass for listeners and orchestral colleagues unaccustomed to serious attention to the artists in the back row. As to the time-honored “hierarchy of musical instruments,” it was clear that these families, and their virtuoso protagonists, deserve equivalent respect. We’ve no doubt from his conducting and occasional ensemble appearances that Andris Nelsons, the BSO conductor who was trained as a trumpet player—and who so clearly admires both Thomas Rolfs, the principal trumpet and brass section leader, and Hakan Hardenberger—would concur.