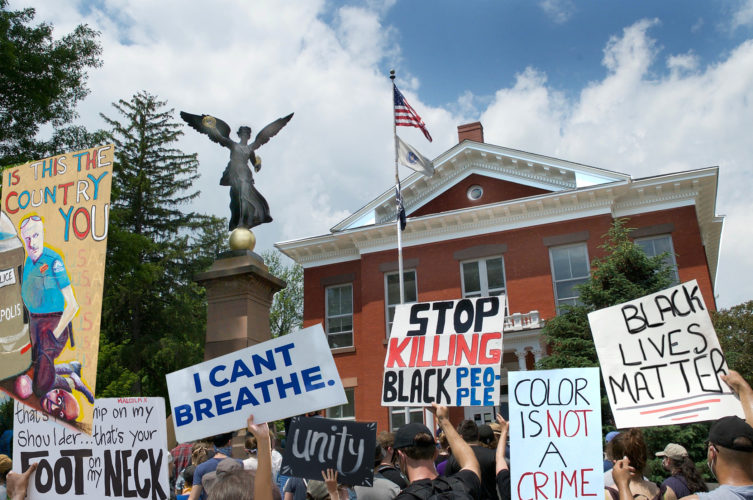 Editor’s Note: This story has been updated and corrected, with new information and with photos, from its original version.

Great Barrington – Joining Black Lives Matter demonstrations nationwide, upwards of 1,000 people gathered in front of the historic Town Hall Saturday afternoon (June 6) – a crowd so large that it spilled into Main Street — to proclaim its outrage at the deadly mistreatment of black citizens at the hands of  police, and to listen to speakers decry the seeming sanction of racism seeping into the fabric of American life.

In part organized by 18-year-old Calista Nelson and her friend Langston Stahler, the protest was prompted by the death of 46-year-old George Floyd, who died May 25 as a white Minneapolis policeman, Derek Chauvin, ground his knee into Floyd’s neck, after he had been handcuffed and was lying on the pavement, for 8 minutes, 46 seconds, asphyxiating him as he pleaded that he could not breathe. A video recording of his death went viral, prompting worldwide condemnation and instigating demonstrations in cities and towns across the U.S.”

His murder at the hands of police – so vividly recorded – instantly came to symbolize not just racial injustice but also a broader sense that our country is being victimized by an authoritarian mindset that is infecting and afflicting our institutions.

“It has taken a long time, but I think we can now all agree that there is racism in our system of justice,” declared State Sen. Adam Hinds, in his remarks to the rally.

“I think we can now all agree that when you have extreme income inequality and you enter a recession — as we have right now — it is black and brown workers who are hit first, hit hardest, and will feel the downturn longest.

“I think we can now all agree that when you have unequal social determinants of health, people of color end up dying at greater numbers during a health crisis as we are watching right now with COVID-19.

“I also think we can all agree we have not seen a moment with this energy and widespread action in generations, I haven’t seen an opportunity like this to address inequity in my lifetime. This is a moment pass we cannot let pass.

“But there is something I am not convinced we can agree on. Can we all agree that we commit to being committed anti-racists?

“Are we all willing to monitor closely our thoughts, words and actions? Will we take the difficult and uncomfortable actions to stand up to others, or make the deliberate choices in how we educate our children if you are a parent, hiring decisions if you are a manager?

“There is one more thing. Will you stand up for changing state laws? This is the time to commit ourselves to endorse anti-racist legislation that protects the rights of Black and Latino citizens. Last week, the Black and Latino Legislative Caucus stood in front of the Massachusetts State House and outlined an agenda for action. It includes critical action, such as removing the use of choke holds by police. As legislators face difficult votes and conversations, will you be there to stand up for change?

Berkshire District Attorney Andrea Harrington explained that she had sent condolences on behalf of her office to the parents of George Floyd.

“It sickens me that the prosecutors in this case didn’t immediately seek murder charges, until there was intense public pressure,” she said. “But I have the hope of seeing this current generation bring racial justice to this country at last. We need a big structural change in law enforcement.”

Dennis Powell, president of the Berkshire NAACP chapter, had a far harsher assessment. He termed the murder of George Floyd equivalent to the practice of lynching inflicted upon blacks by white racists.

But Powell insinuated that Israelis may have been, in a roundabout way, responsible for Floyd’s death, offering the theory that the techniques used by the Minneapolis Police to subdue Floyd were the result of training by Israeli security forces who use similar methods to subdue Palestinians.

“The training of U.S. police officials by Israeli forces is widespread,” Powell asserted, identifying Jewish organizations as sponsoring such training. He called on “Jewish brothers and sisters” to urge these organizations to call a halt to sponsorship. “Tell them to stop funding and training our police in terrorist techniques because our American citizens are young, old, middle age, Black and Brown people who are not terrorists. It’s got to stop, and it’s got to stop yesterday!”

“What are you going to do?” she asked her audience. “How have you been touched by racism? We can do better. We cannot let this end here. I’m going to stand up and say, ‘no more’.”

The following video of the protest was created by Eoin Higgins: