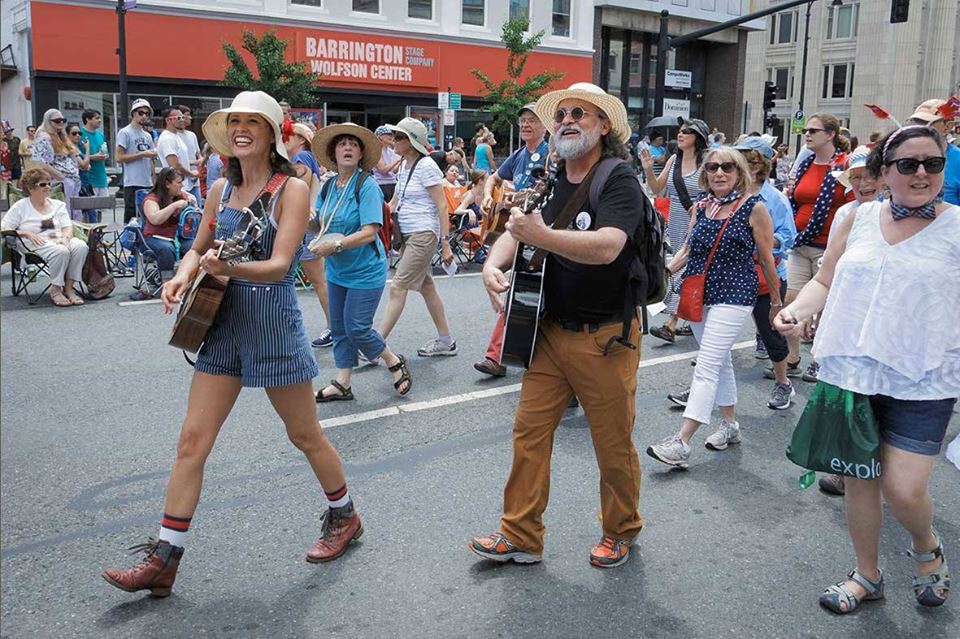 The Hoping Machine, seen here at a parade in Pittsfield on July 4, will present a benefit concert for Hurricane Harvey relief at Saint James Place in Great Barrington on Thursday, Sept. 14. Photo courtesy the Hoping Machine

Presented by musicians’ and activists’ group the Hoping Machine and Saint James Place, the concert will feature Reggie Harris and Greg Greenway, the Hoping Machine, John Kirk and Trish Miller, Bernice Lewis, the Beeline Ramblers, and Graham and Barbara Dean.

Williamstown — NASA is celebrating the 40th anniversary of two spacecraft, Voyager 1 and 2, that were launched toward Jupiter and Saturn, which they reached in 1979 and 1980, respectively. Voyager 2 went on to Uranus and Neptune, passing Neptune in 1989. Since then, they have continued outward, one even leaving the solar system.

Each spacecraft contains a golden record that contains 115 photographs, greetings in many languages and samples of music from Bach to Chuck Berry. Messages from former President Jimmy Carter and the United Nations Secretary-General also appear. One of the photographs was taken by Williams College astronomer Jay Pasachoff. “Carl Sagan had the idea for the golden record, and our then-recent Williams College alumna Wendy Gradison was assisting him,” said Pasachoff. “I submitted a few photographs on various topics, and two were chosen. The picture that was ultimately launched, in digital form, was taken from a helicopter on my honeymoon. We were approaching Heron Island in the Great Barrier Reef in Australia, and the photo is in a geology sequence since it shows the reef, trees, ocean, beach, and other terrestrial features.”

The Voyagers are now over 100 times farther from the Sun than Earth is, with their radio signals taking over 17 hours to reach Earth. Voyager 1 was launched on Sept. 5, 1977. Voyager 2 was launched 16 days earlier, but on a slower trajectory, so reached Jupiter slightly after Voyager 1.

Pittsfield — The Beacon Cinema will join theaters nationwide on Tuesday, Sept. 12, at 7 p.m. in a one-night screening of the award -winning documentary “May It Last: A Portrait of the Avett Brothers.” The screening follows the band’s Sept. 1 appearance at Tanglewood in Lenox.

Filmed over the course of more than two years, “May It Last” is an intimate portrait of the acclaimed North Carolina band the Avett Brothers, charting their decade-and-a-half rise while chronicling their present-day collaboration with famed producer Rick Rubin on the Grammy Award-nominated album “True Sadness.” With the recording process as a backdrop, the film depicts a lifelong bond and unique creative partnership as band members undergo marriage, divorce, parenthood, illness and the challenges of the music business.

West Stockbridge — On Saturday, Sept. 9, at 6 p.m., Turn Park Art Space will present a concert by jazz-fusion artist Alex Rostotsky and his niece, jazz vocalist Alina Rostotskaya. Showcasing Rostotsky’s album “Songs of Lake Victoria and Russian Plains,” the concert will be accompanied by a slideshow of Rostotsky’s drawings and will be followed by a reception to view “Splashes,” the exhibition of Rostotsky’s art currently hosted by Turn Park as well as a showing of the animated film “Apocryph” projected upon a 20-foot-high rock face.

Rostotsky is a Russian jazz musician, composer, arranger, author and visual artist whose discography includes more than 25 albums and whose artworks are housed in museums and private collections in Russia, Europe and Africa. His ethno-fusion musical style combines the sound of synthesizers with the themes and melodies of world music and draws on his academic training in Russian folk music.

Tickets are $20. For tickets and more information, see the Berkshire Edge calendar or contact Turn Park Art Space at (413) 232-0275 or info@turnpark.com.