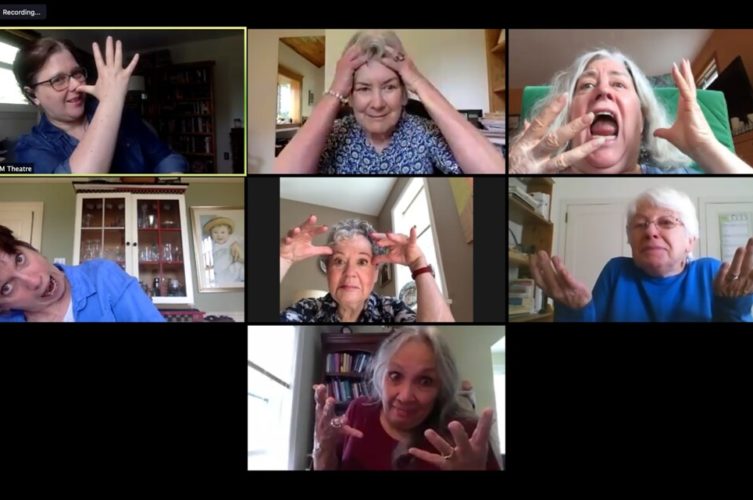 Lenox — WAM Theatre’s Elder Ensemble and People of Color Ensemble present “The Suffrage Project,” an online exhibit of original art centered on the theme of suffrage and citizenship. The individual pieces — including visual art, songs, monologues, poetry, dramatic scenes, dance and photography — are showcased in an online gallery on WAM’s website throughout July and August. The gallery includes reflections on the 100-year anniversary of the passage of the 19th Amendment in combination with powerful statements about marginalized groups in this country who are still fighting for full and unwavering citizenship. In celebration and culmination of the four-month collaboration, WAM will host an opening reception for “The Suffrage Project” Sunday, July 26, at 3 p.m. via Zoom.

WAM’s Elder Ensemble led by WAM associate artistic director Kingston and Amy Brentano, and intergenerational People of Color Ensemble led by Lia Russell-Self and Trenda Loftin have been meeting weekly for three months, experimenting with devising new group pieces over Zoom and holding space for conversations about citizenship in the United States at this time of antiracism uprisings. Two of these short group pieces will premiere at the opening reception.

Both the reception and the exhibit are free and open to the public. Registration is required for the reception. For more information or to register, see the Berkshire Edge calendar or contact WAM Theatre at (413) 274-8122 or info@wamtheatre.com.

OLLI to debut ‘The Future of Classical Music’ series

Pittsfield — Carl and Claudia Shuster have teamed up with the Osher Lifelong Learning Institute at Berkshire Community College for “The Future of Classical Music: Spotlight on Young Artists,” a series that will feature intimate live interactive visits via Zoom with some of classical music’s brightest young stars. The series will kick off Sunday, July 26, at 1 p.m. with mezzo-soprano Fleur Barron.

Barron sang the role of Anna II in Kurt Weill’s “The Seven Deadly Sins” at Tanglewood’s Ozawa Hall in 2016. At the end of that summer, she was awarded the Tanglewood Music Center’s Jackson Prize. The following year Barron was a featured artist with the Sarasota Opera. In 2018 Barron was named the HSBC Laureate of the Festival d’Aix-en-Provence. During the episode, will share her journey from her birthplace in Northern Ireland through her early years in Singapore and China as the child of a BBC war correspondent, and her formal and musical education in America. Using clips from her recitals and performances, Barron will share her experiences singing and will also describe the effects of the pandemic on her career and the challenges they pose for her and other young artists.

Single-session tickets are $15 for OLLI at BCC members and $20 for the general public. Series tickets to all four sessions is $50 for OLLI members and $70 for the general public. Registration is required. For more information or to register, see the Berkshire Edge calendar or contact the Osher Lifelong Learning Institute at Berkshire Community College at (413) 236-2190 or olli@berkshirecc.edu.

Pittsfield — Kids 4 Harmony will host a virtual gala Monday, July 27, at 7 p.m. The event will celebrate the achievements of Kids 4 Harmony’s musicians, whose lessons and practice have continued virtually, and will honor Boston Symphony Orchestra President/CEO Mark Volpe and his wife, Martha Volpe. There will also be a special message from pianist Emanuel Ax plus and new and past performances by Kids 4 Harmony participants.

Inspired by the El Sistema model of music for social justice change, Kids 4 Harmony is a free, intensive classical music program for youth from underresourced communities in Berkshire County.

Though the event is free and open to the public, the Kids 4 Harmony summer gala concert is the single fundraising event for the program, which relies primarily on private support for its operations. Registration is required. For more information or to register, see the Berkshire Edge calendar or contact Sarah Frederick at (413) 770-2046.

Stockbridge — The Austen Riggs Center’s Erikson Institute for Education and Research has announced the recipients of the 2020 Evelyn Stefansson Nef Scholarship, which has been awarded annually since 2000 to students from Lenox Memorial Middle and High School, Monument Mountain Regional High School and Lee Middle and High School who are selected for academic excellence, intention to study social sciences or premedical studies in a four-year college program, and demonstrated leadership in community service.

The scholarship of $1,000 is paid to recipients after they complete the first semester of college and was originally made possible through Mrs. Evelyn Nef of the Evelyn Stefansson Nef Foundation.