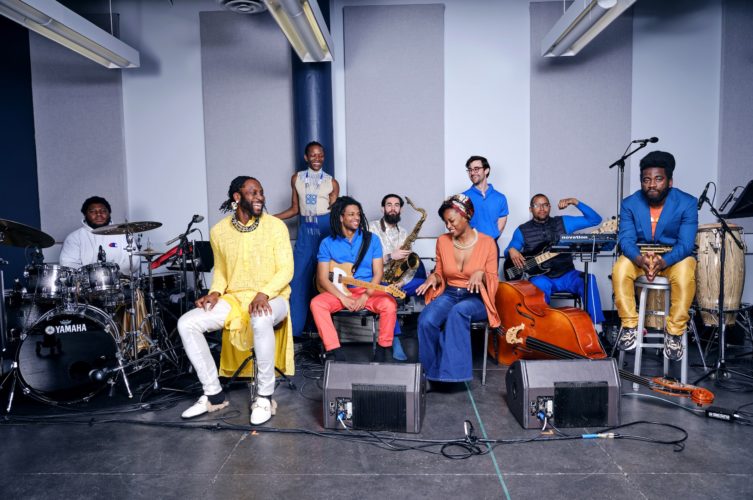 Mwenso and the Shakes will perform at Bard College on June 25. Photo courtesy of the Fisher Center.

Standard admission is $50, but tickets bought in advance are $40. Tickets for those under 30 are $15 with an ID, and full-time students and children are admitted for free. For more information and to buy tickets, visit astonmagna.org.

PITTSFIELD – Berkshire Museum’s new exhibit Living Ink: The Art of Tattoos, an artistic, scientific, and historical look into tattooing, will open Friday night, June 24 at 6:30. Featuring the work of tattoo artists with a wide array of styles, levels of experience, and backgrounds, alongside the history and science behind the art form, the exhibit will seek to broaden viewers’ understanding of tattoos. 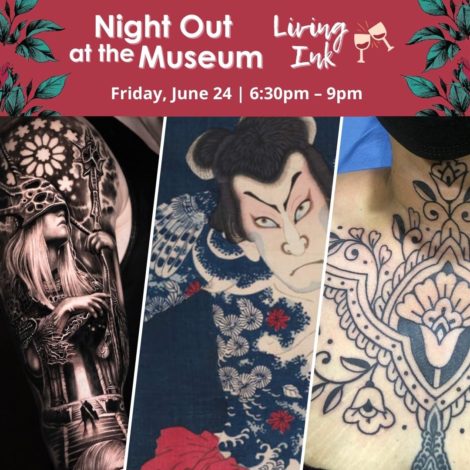 The exhibit is displayed in individual booths built to resemble the spaces artists use to tattoo clients. Visitors can explore the winding maze of rooms while taking in the artistry of the intricate, bold designs. The exhibit also offers perspective into the cultural practices of tattooing such as Irezumi, developed and popularized during the Edo period (1600 – 1868) in Japan, and Tunniit, the Inuit practice of facial tattooing done on women, by women.

The Museum celebrates the opening of this exhibit by offering a first look at the exhibit Friday, June 24 at 6:30 PM with a talk by Sarah E. Thompson, Curator of Japanese Art at the Museum of Fine Arts Boston and author of the book Tattoos in Japanese Prints. This event is open to all ages, but please note nudity is featured in this exhibit. Advance tickets can be purchased at https://berkshiremuseum.org/event/night-out-at-the-museum-living-ink/.

The Museum is open Monday through Saturday from 10 am to 5 pm and Sunday noon to 5 pm. Admission is $15 for adults; $13 for students; $8 for children 4-18; free admission for children 3 and under, Museum members, and EBT cardholders. For more information, visit www.berkshiremuseum.org or call 413.443.7171.

CHESTER — The 33rd season of the Chester Theatre Company (CTC) begins this Thursday, June 23. The season will feature four productions, including a World Premiere Commission and a fresh restaging of a popular hit. This season marks CTC’s seventh under Producing Artistic Director Daniel Elihu Kramer.

The season will open with Pride@Prejudice, written and directed by Kramer. Originally premiered at CTC in 2011, Pride@Prejudice is a reimagining of the beloved Jane Austen classic filled with bloggers, chat rooms, Austen enthusiasts, and even Jane herself. This homage to Jane Austen’s most beloved novel features 30 characters portrayed by five versatile actors, including Candace Barrett Birk who appeared in last season’s Tiny Beautiful Things, and Marielle Young, who starred in Mary’s Wedding (2018) and The Night Alive (2019). Kramer will direct the production himself, giving this Chester favorite a fresh twist as the company welcomes its audiences back home for the season opener.

Tickets are $52.50, though a variety of discounts, including for students and Chester/Middlefield residents, are available. For a full list of ticket options, visit https://chestertheatre.org/plan-your-visit/buy-tickets/. To buy tickets and view all performance times, visit https://ci.ovationtix.com/35011. Proof of vaccination and (non-cloth) masks are required at all performances.

ANNANDALE-ON-HUDSON, N.Y. — Bard celebrates Black roots music this weekend with Black Roots Summer, presented in association with Electric Root and curated by musician Michael Mwenso and producer and curator Jono Gasparro. The weekend’s performances will be held in the Spiegeltent at Bard College as a part of their Summerscape programming.

On June 24 at 8 p.m., Bard presents The Sound of (Black) Music, featuring songs from Rodgers and Hammerstein’s final musical, “The Sound of Music,” reimagined through an Afrofuturistic lens. A group of performers will put on a dynamic show full of their own renditions of the classic tunes.

On June 25, Michael Mwenso and his band, “The Shakes,” will perform at 8 p.m. The band self-describes as “commanding a formidable timeline of jazz and blues expression through African and Afro American music.” The group, led by Mwenso, is inspired by artists like Muddy Waters and James Brown.

On Sunday, June 26, from 4-7 p.m., a block party called “Rhythm and BBQ” will be held to round out the weekend. The community is invited to gather for an all-ages celebration. Live music, DJs, dancing, and more will fill the Spiegeltent inside and out for a late afternoon of joy, hope, healing, and BBQ.

For more information, and to buy tickets for each event, visit https://fishercenter.bard.edu/whats-on/programs/spiegeltent/.

PITTSFIELD — The world premiere of B.R.O.K.E.N code B.I.R.D switching written by Tara L. Wilson Noth and directed by Kimille Howard will take place June 23 through July 9 at The Unicorn Theatre in Stockbridge.

In this timely play, a woman representing a black teenager accused of murder is forced to face truths about marriage, race and the choices she has made and the unspoken lies she told herself to conform. Wilson Noth says, “I feel very fortunate that I could use my words to craft this story. It is a story of race and identity, of promise and purpose… but perhaps more importantly, it is the story of the potency of being seen.”

WEST STOCKBRIDGE — Six Depot Roastery and Cafe will reopen Thursday, June 23, and will be open daily from 8 a.m. – 3 p.m. following their reopening. According to a blog post on their website, Six Depot will reopen with a much more coffee-focused menu. They will provide snacks, baked goods, and other things to eat, but will not offer meals as they have in the past.

Six Depot has grown their wholesale business in the time the cafe was closed, and has also done major renovations to the building. In addition to their West Stockbridge cafe, Six Depot is also vending at the Great Barrington Farmer’s Market each Saturday.