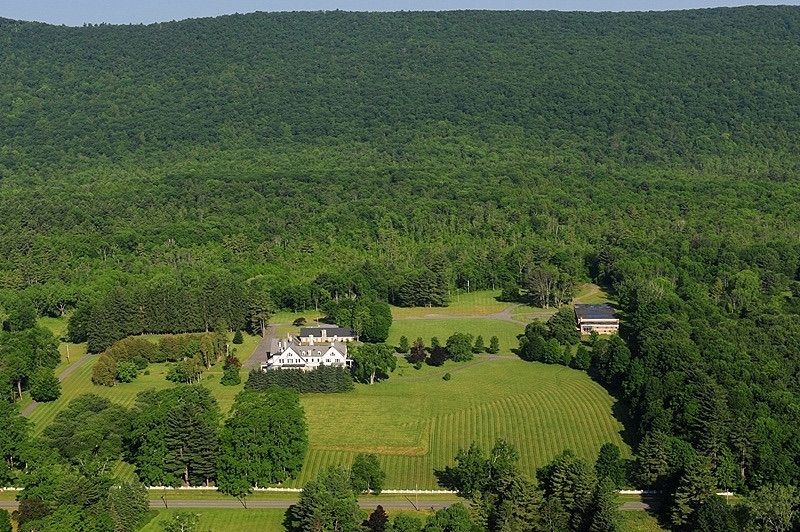 An aerial view, taken in 2012, of Bonnie Briar, the Gilded Age estate that became the DeSisto School. The estate was purchased in 2009 by Patrick Sheehan, who has cleaned up and stabilized the structure and plans to turn the mansion into a five-star hotel and add a larger condo and home development to the property. The property will host Family Fun Day on Saturday, July 22. Photo courtesy Kellsboro

Activities will include tours of the mansion, a guided hike at 10:30 a.m. through the property’s wooded logging roads, entertainment with Roger the Jester from 11a.m. to 1 p.m., all-day face painting, live music and a barbecue picnic from 11:30 a.m. to 2 p.m. The property, which has been closed to the public since 2005, was the original home of what is now Tanglewood and encompasses 320 acres at the eastern base of the Yokun Ridge. The property’s owner plans to develop the estate into a resort and residential community that includes an organic farm.

This is the first public event at the property in several years, and the day’s events are free. For more information, contact 37interlaken@gmail.com.

Hillsdale, N.Y. — Oldtone Productions will present the first annual SuperTone Music Festival at Roeliff Jansen Park at 1 p.m. on Saturday, July 22. The festival will feature a unique blend of young and fresh country, rock and roots music in a family-friendly community atmosphere with local food and arts vendors will be featured throughout the day.

Tickets are $35–$48 and a portion of the proceeds will benefit the Hillsdale Fire Company. Tor tickets and more information, see the Berkshire Edge calendar or call (646) 269-9216.

In April 1935, Glenn Miller recorded under his own name for the first time. In 1937 he formed his own band and created a few recordings. Disbanding in 1937, Miller reformed for a second time in March 1938 and the second Glenn Miller Orchestra soon began breaking attendance records. Recordings such as “Tuxedo Junction” sold 115,000 copies in the first week. In 1941 the band worked on its first movie in Hollywood and, in late 1943,was shipped out to England where, in less than one year, the Glenn Miller Army Air Force Band engaged in over 800 performances of which 500 were broadcasts heard by millions.

Hilscher, the leader of the GMO, became its featured male vocalist in 1998 and has been featured on the group’s albums “On The Air” (2002) and “Steppin’ Out” (2005). Multitalented as singer, pianist, arranger and orchestrator, Hilscher has displayed his talents for conducting as director of the Tommy Dorsey Orchestra.

Schafer, the GMO’s female vocalist, was awarded the Outstanding Soloist Award at the Next Generation Jazz Festival and Reno Jazz Festival and, for four consecutive years, served as a leading member of other award-winning vocal jazz groups.

Tickets are $35 in advance, $40 at the door and $30 for veterans and active military personnel with ID. For tickets and more information, see the Berkshire Edge calendar or contact Berkshire Bash at (413) 644-6379.

Great Barrington — Hevreh of Southern Berkshire will host the Berkshires’ first annual Jewish Festival of Books Thursday, July 20, through Sunday, July 23. Co-presented by Hevreh and Jewish Federation of the Berkshires in partnership with the Jewish Book Council and the Harold Grinspoon Foundation, the festival will feature free and fee-based lectures, teachings and readings by national, international and local authors.

At 11 a.m. on Friday, July 21, cookbook author Joan Nathan will discuss her latest book, “King Solomon’s Table: A Culinary Exploration of Jewish Cooking From Around The World,” with Seth Rogovoy, editor and publisher of the Rogovoy Report, contributing editor for the Forward, and author of “Bob Dylan: Prophet Mystic Poet, and The Essential Klezmer: A Music Lover’s Guide to Jewish Roots and Soul Music.” Other highlights of the festival include the opening night reception with Jennifer Keishin Armstrong on Thursday, July 20, at 5:30 p.m., followed by a multimedia presentation at 7 p.m. on her book “Seinfeldia: How A Show About Nothing Changed Everything;” Rabbi Marc Katz sharing a teaching at noon on Saturday, July 22, based on his work, “The Heart of Loneliness: How Jewish Wisdom Can Help You Cope and Find Comfort and Community;” Elizabeth Poliner reading from her novel “As Close to Us as Breathing” on Sunday, July 23, at 10 a.m.; Lloyd Handwerker discussing “Famous Nathan,” his book about his grandfather, Nathan Handwerker, the founder of Nathan’s Famous, on Friday, July 21, following the 7:30 p.m. Shabbat evening service; and Shabbat family storytime on Saturday, July 22, at 4 p.m. with Roni Schotter reading from her books “Go Little Green Truck” and “All About Grandmas.”

The festival includes both free and ticketed events. For tickets and more information, see the Berkshire Edge calendar or call Hevreh at (413) 528-6378. 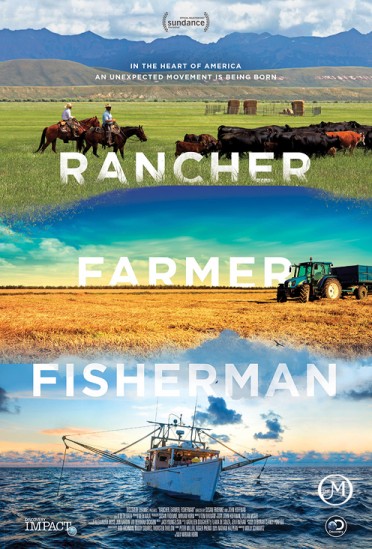 Millerton, N.Y. — On Sunday, July 23, at 11 a.m., the Moviehouse will present a free community screening of the documentary film ‘Rancher, Farmer, Fisherman’ as part of its FilmWorks Forum series.

Narrated by award-winning journalist Tom Brokaw and directed by Academy Award-nominated and Emmy Award-winning filmmakers Susan Froemke and John Hoffman, ‘Rancher, Farmer Fisherman’ introduces audiences to four unexpected warriors for a hidden but far-reaching conservation movement: a Montana rancher, two Kansas farmers and a Louisiana fisherman. With a passion for the terrain that defines their identity, each has bridged long-standing divides to preserve the landscapes that sustain their livelihoods.