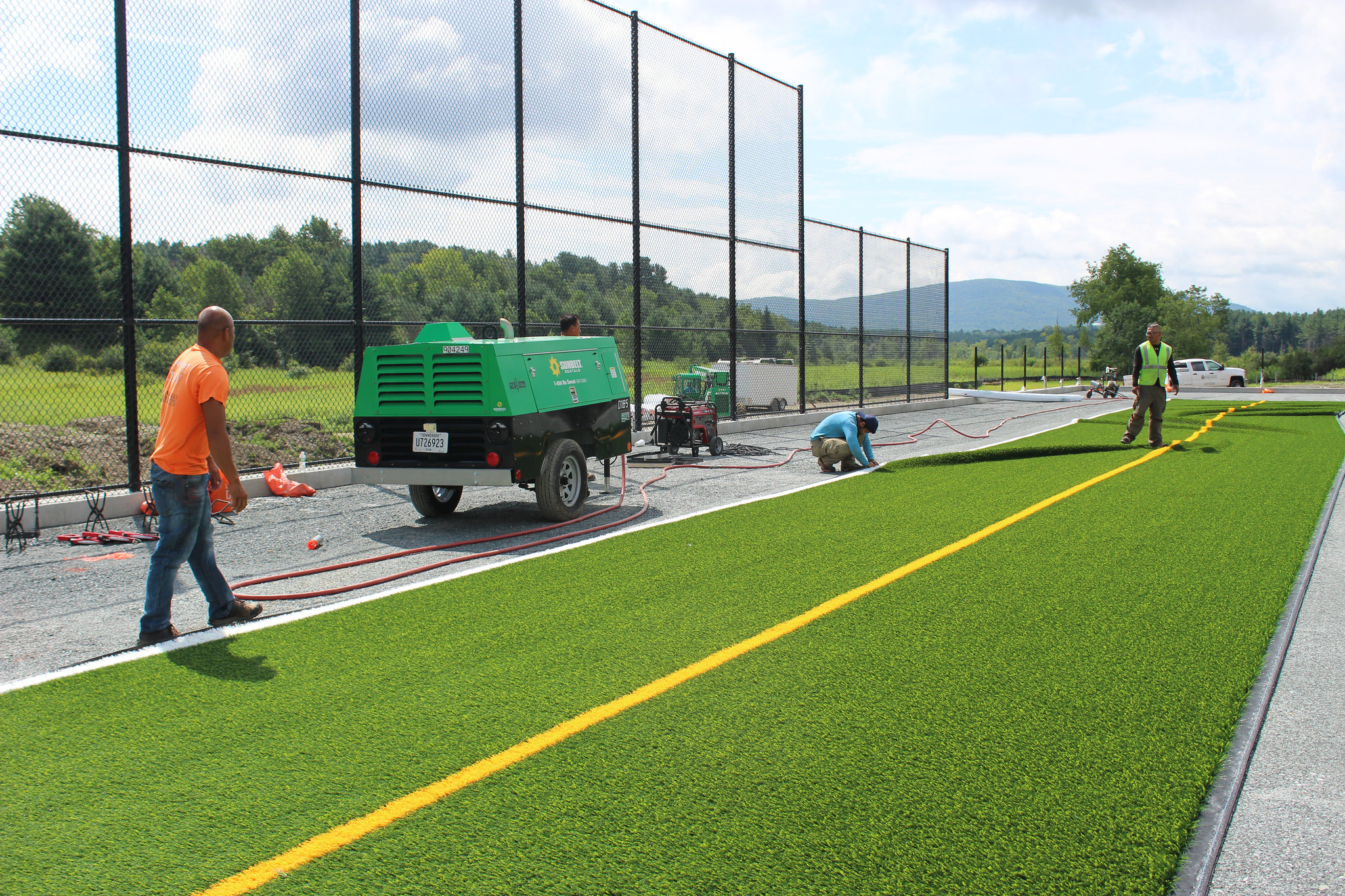 Pittsfield — On Friday, Aug. 31, at 3 p.m., Berkshire Community College will host a ribbon-cutting and naming ceremony for the first publicly available turf field in the Berkshires, followed by the Berkshire Kickoff Classic, the first event to be held on the new field.

The field will serve as a community facility to be used by Berkshire County students, athletic teams and community organizations. Local teams in the Berkshires will now be able to use the field and hold games that are compliant with the rules of the Massachusetts Interscholastic Athletic Association, which oversees high school sports. The field’s name will be announced at the ceremony, and the field will officially be open to the community at the conclusion of the event.

The event is free and open to the public. For more information, contact Berkshire Community College at (413) 499-4660.

The Sister City Jazz Ambassadors are a dedicated group of professional New Orleans-style jazz musicians based in Pittsfield. The group is led by music educator Andy Kelly, whose life mission has been to spread peace and joy using music. The group has performed in Turkey, Nicaragua, Italy and Ireland as well as around the U.S. The concert will feature the group making music in the style of traditional New Orleans jazz musicians from the early and mid 20th century.

Hudson, N.Y. —  The 510 Warren Street Gallery will present “Forest Revelations,” an exhibition of drawings and paintings by Edge contributor Carolyn Newberger, Friday, Aug. 31, through Sunday, Sept. 30. A reception with the artist will be held Saturday, Sept. 1, from 3 to 6 p.m.

Living on the edge of a deep forest, Newberger and her dog, Lily, have been exploring it together in pursuit of morels and other delectables nestled under the forest floor. With folding stool, notebook and art supplies on her back, Newberger enters to record many of the revelations the forest offers. Newberger’s work depicts life seizing every opportunity to emerge from the stew of decomposition, bringing olfactory and textural sensations to life with skillful brush-painting.

Newberger is an artist, child psychologist and musician whose deep concerns for people and their lives drive her work. She attended to Sarah Lawrence College and received her doctorate from Harvard University, after two years in Burkina Faso with the Peace Corps. As a psychologist, Newberger developed an influential theory of parental consciousness that continues to frame family studies and efforts to prevent child abuse. Called often as an expert on television news, she appeared twice on the Oprah Winfrey Show and has published widely in both the scientific and popular press.

The exhibit and reception are free and open to the public. For more information, contact the 510 Warren Street Gallery at 510warrenstgallery@gmail.com.

The talk coincides with the “Lumina Edition,” Casana T House’s second exhibit of works by the two artists. Known for using large-format view cameras and long exposure times, the artists capture dramatic lighting, textures and a spirituality of their places and subjects. In “Lumina Edition,” the couple collaborate together to present details of trees, flowers, leaves, stones, fruits, grasses, twigs, snow, rain, wind, and the life and culture of the region to give viewers a unique, intimate and humanistic perspective into botanical themes.

Kenro Izu was born in Osaka, Japan, in 1949 and studied art at Nihon University in Tokyo. After establishing a studio in New York City, he began traveling the world, photographing sacred places from Egypt and the Middle East to Europe, Central America, South America and Asia. Izu has since created major bodies of work focused on Cambodia, Nepal, Bhutan, and most recently India. His work has been published in numerous books and can be found in museum collections including the Metropolitan Museum of Art in New York City; the Museum of Fine Arts, Houston; the Los Angeles County Museum of Art; Kiyosato Museum of Photographic Arts in Yamanashi, Japan; and the Tokyo Metropolitan Museum of Photography. Izu has received awards and fellowships from the National Endowment for the Arts, the New York Foundation for the Arts and the John Simon Guggenheim Memorial Foundation.

Yumiko Izu studied at the Visual Arts School in Osaka and later moved to the U.S., where she obtained her bachelor’s degree from the Brooks Institute of Photography in California. In 1998 she relocated to New York City and worked in commercial and editorial photography before launching her fine-art career in 2003. She is a recipient of the 2007 photographers’ fellowship from the Center for Photography at Woodstock and has held numerous exhibitions in the U.S. and Japan.

The talk is free but reservations are required. For more information or to reserve a space, see the Berkshire Edge calendar or contact Casana T House at (518) 325-6105 or info@casanatea.com.