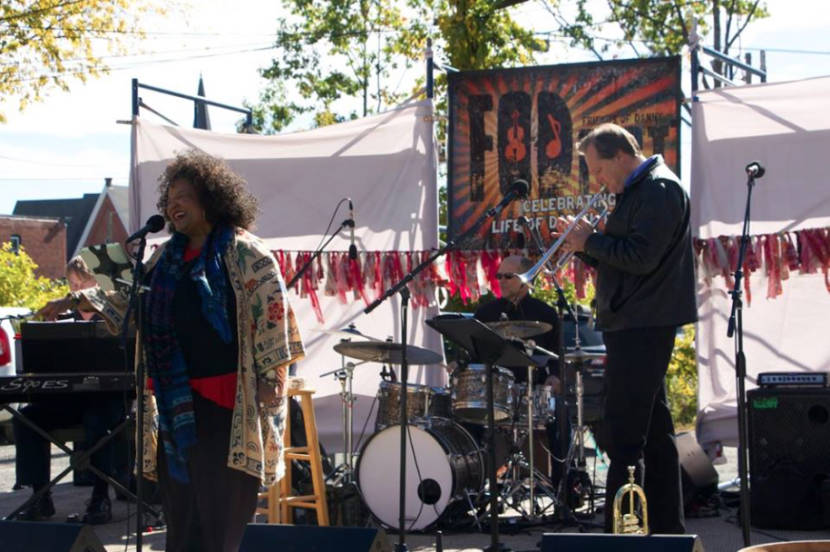 Music in Common’s flagship event, FODfest is produced annually to celebrate the life of Daniel Pearl, the Wall Street Journal reporter who was abducted and murdered by militants in Pakistan in 2002. In 2005, singer-songwriter and producer Todd Mack organized an informal backyard jam in honor of his friend and bandmate. Since that time, thousands of musicians around the world have participated in the unique concert experience.

“Danny started his journalism career right here in the Berkshires and performed regularly with local musicians at local venues, so FODfest always has a particularly special significance here,” said Mack.

The FODfest event evolved into Music in Common, an international nonprofit organization that has directly served thousands of people in more than 300 communities across the U.S., Middle East, and Far East and operates multiple programs locally, nationally and internationally.

The event is free and open to the public. Artists interested in performing at FODfest 2018 must register via an online artist request form. Donations will be gratefully accepted. For more information, contact Music in Common at (413) 248-6070 or info@musicincommon.org.

Housatonic — The Berkshire Women’s Action Group’s Environment Committee will present “PLASTIC!” Tuesday, Nov. 13, from 7 to 9 p.m. at the Deb Koffman ART studio, 137 Front St., featuring area writers and musicians who will entertain with essays, poems, stories and songs on the theme of “plastic.”

Great Barrington made the choice to remove single-use plastic water bottles from all store shelves starting May 1, 2019. To ease the transition and make tap water more readily available, the committee is planning a gradual rollout of modern, hygienic water-refill stations around Great Barrington and Housatonic. The group has already secured funding for one station in Great Barrington, and is now fundraising for the second, to be installed in Housatonic. Participants will include Jennifer Browdy, Suzie Fowle, Bruce Garlow, Lorrin Krouss, Susie Kaufman, Bubsy McDonough, Ted Phelps, Susan Solovay, Joanne Spies and Ted Thomas.

The cost of admission to the event is a sliding-scale donation of $25–$100. Proceeds will go toward the purchase of a water refill station for Housatonic. For more information, contact campb2311@aol.com.

Lenox — Musician and naturalist Aimee Gelinas, director of the Tamarack Hollow Nature and Cultural Center in Windsor, along with dancer and artist Kim Waterman, will present a world music program for children at the Lenox Library. The program will run for five consecutive Tuesdays, beginning Tuesday, Nov. 13, at 11 a.m.

Gelinas and Waterman are the co-directors of the world music and dance program at Berkshire Pulse in Housatonic and they will help participants in the library’s program learn about the natural world through storytelling, drum rhythms and dance movements, songs in various languages, and sharing locally found nature items. The program is geared toward ages 4–8, but all ages are welcome. Children must be accompanied by an adult.

The program is free and open to the public. Registration is required. Participants may sign my sign up for as many sessions as they wish; attending all five sessions is not necessary. For more information or to register, contact the Lenox Library’s youth librarian Katie Wallick at (413) 637-0197 x105 or kwallick@lenoxlib.org.

North Adams — The Williams College Davis Center, the Massachusetts College of Liberal Arts Multicultural Education Resource Center, and the Bennington College Engagement Center will co-host a screening of the film “No Más Bebés” Tuesday, Nov. 13 at 7 p.m. in the MCLA Sullivan Lounge as part of the Social Change Film Series. A conversation with MCLA assistant professor of English and communications Hannah Noel will follow the screening. Noel, who graduated from Williams in 2008, specializes in mass media, cultural studies and racial theory.

Released in 2015 at the LA Film Festival, “No Más Bebés” is a documentary film that recounts the stories of Latina immigrant women in Los Angeles who were involuntarily sterilized after giving birth in the 1960s and ‘70s. In the film, the women share details of their experiences and discuss the impact of the event on their families and communities. Members of the women’s families are also featured, many of whom share emotional reactions to their loved one’s experience. The film also looks at the pushback from the Chicana rights movement; in particular, the Madrigal v. Quilligan case in which the women and their families sued the hospital that performed the sterilizations. Footage of the trial also spotlights the work of lawyer Antonia Hernandez, who built her career challenging institutions such as the hospital placed on trial in the lawsuit.

The screening is free and open to the public. For more information, contact the Williams College Office of Communications at (413) 597-4277.

The Mount to host ‘Voices of Poetry’

Founded by poet and activist Neil Silberblatt, VOP organizes readings featuring accomplished poets and writers and talented musicians at venues throughout New England and New York. Silberblatt is the host and administrator of the Voices of Poetry Facebook group, which has over 930 members including the 2014 winner of the Pulitzer Prize for Poetry; several Pulitzer Prize nominees and National Book Award finalists; and many other fans of written, spoken and sung words.

Tickets are $15 for the general public and $10 for members of the Mount Members. Reservations are recommended. For tickets and more information, see the Berkshire Edge calendar or contact the Mount at (413) 551-5111 or info@edithwharton.org.