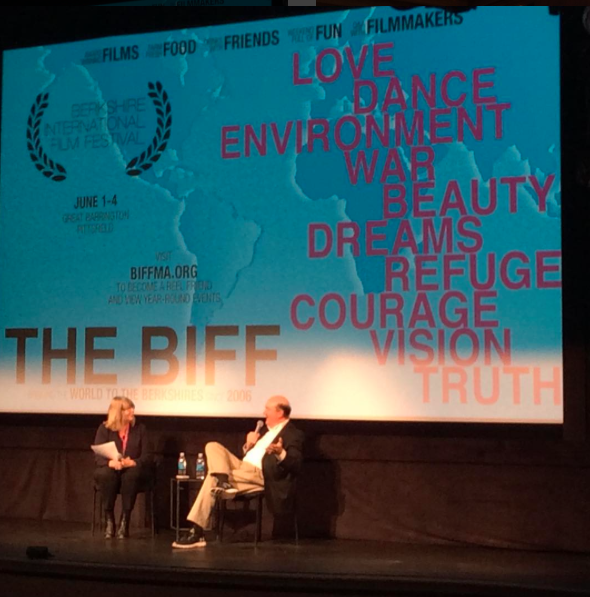 In the juried documentary category, the winner was “Nowhere to Hide,” directed by Zaradasht Ahmed and soon to be released by East Village Entertainment. In the juried narrative category, the Israeli entry from Film Movement, “Bar Bahar,” or “In Between,” was awarded the prize.

The winner of the Berkshire Bank Next Great Filmmaker Award was Denmark’s Helene Moltke-Leth, whose short film “Running Through Life” provides insight into the relationship among individuals, their community and technology and the desire to live a balanced life.

Mansour is spending five days in residence at DTF developing a brand new in-progress work. She will be joined by director Scott Illingworth and actors Erin Anderson, Christy Escobar, Rafi Silver, Melisa Aker and Andy Ingalls, who will present the play.

“I started off wanting to research two things that were part of the makeup of my home city, San Diego: bioengineering and zoos. I became interested in how we communicate with animals: how much do we project onto them? Each zookeeper I met with had more than one experience of feeling like they and their animals had an understanding that transcended a scientific understanding…so that’s the area we’ll be exploring in this new work,” said Mansour.

Mansour’s play “Unseen” premiered at the Gift Theatre in Chicago in February 2017. “The Vagrant Trilogy” was recently presented at New Dramatists in New York City after a workshop at the Vineyard Arts Project with the Public Theater. Mansour was a member of the Public Theater’s Emerging Writers Group and a Core Writer at Minneapolis’ Playwrights’ Center. With Tala Manassah, she wrote “Falling Down the Stairs,” an Ensemble Studio Theatre/Sloan commission. Their short play “Dressing” is part of “Facing Our Truth: Ten-Minute Plays on Trayvon, Race and Privilege,” a collection of plays commissioned by the New Black Fest. Mansour is the recipient of the 2012 Whiting Award and 2014 Middle East America Distinguished Playwright Award.

Pittsfield — On Monday, June 12, at 10:45 a.m., the Jewish Federation of the Berkshires will present Massachusetts Public Health Association organizer Kristina St. Cyr, who will give a talk titled “Advocating for Healthy, Affordable Food in Massachusetts” at Congregation Knesset Israel.

In Massachusetts there are 2.8 million residents, including more than 700,000 children, living in lower-income areas with low grocery store access. Over 680,000 state residents are likely eligible for federal nutrition benefits but are not receiving them. MPHA works with partners around the state to address issues of healthy food access and affordability. Attendees will learn more about how MPHA is addressing food insecurity through its work leading the Massachusetts Food Trust, the SNAP Gap campaign and the Healthy Eating Community of Practice.

St. Cyr is responsible for managing all aspects of MPHA’s healthy food financing campaign. Prior to joining MPHA, she served as the coordinator for the Dona Ana Place Matters team in southern New Mexico. Place Matters is a nationwide health equity initiative aimed at reducing health disparities by identifying their complex root causes and defining strategies to address them.

Çelebi is an alumnus of Pittsfield High School and Berkshire Music School, where he studied under Jean Stackhouse, and is now in his third year at the Oberlin Conservatory of Music. He has won prizes from the New England Piano Teachers’ Association and the Uel Wade Scholarship Competition. Last year, he was invited to perform at the Tanglewood 75th anniversary concert. Çelebi is also a composer and studies composition with Jesse Jones and Stephen Hartke.

The performance is free and open to the public; a retiring collection will be taken in support of the artists. A reception with refreshments will follow the program. For more information, call the Southfield Church at (413) 229-8109.

Pittsfield — Berkshire County Arc held its 23rd annual golf classic at Berkshire Hills Country Club on May 25. More than 180 golfers on 45 teams participated in the tournament, which raised $43,000 to support individuals with developmental disabilities and brain injuries throughout Berkshire and Hampden counties.

Approximately 100 organizations contributed sponsorships to the golf classic, and more than 50 volunteers and organizations donated time, raffle prizes and silent auction items. To date, the annual event has raised approximately $723,500 and awarded more than $93,000 in scholarships to graduating high school seniors who are pursuing careers in the human services field. Tournament results are below.