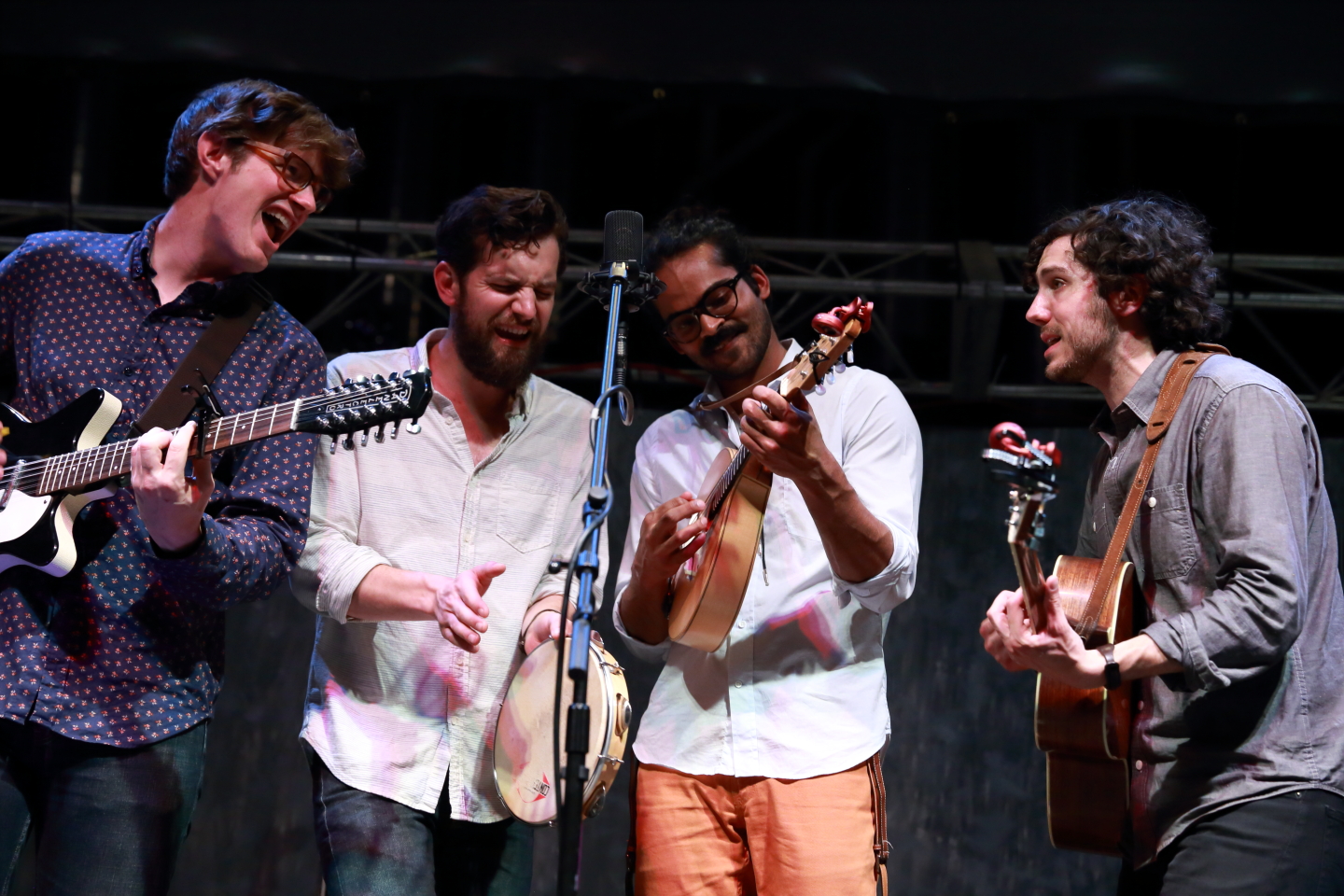 The members of Darlingside met as students at Williams College where they began writing and singing together. Shortly after graduation they moved into a house in the Pioneer Valley and formed a band. That was six years ago and, since then, they have continued to hone their songwriting skills and unique instrumentation, garnering praise from Rolling Stone, NPR Music, and the New Yorker. The band members share lead vocal and songwriting duties, have learned techniques and instruments to support their material, and the ethereal vocal blend they achieve is the result of the flexibility they have as a group.

See the Berkshire Edge calendar for tickets and more information or call the club at (518) 828-4800.

Pittsfield — On Friday, January 15, Rabbi Josh Breindel of Temple Anshe Amunim and Pastor Sheila Sholes-Ross of First Baptist Church will hold a service in commemoration of Martin Luther King Jr., Day at Temple Anshe Amunim at 7 p.m. The event will be open to all members of the community and a light dessert reception will follow.

The annual service will reflect the joint themes of social action and awareness, and will include inspirational readings as well as music by the Temple Anshe Amunim and First Baptist Church choirs.

Rabbi Breindel commented, “Reverend King taught that people of faith must stand together. Pastor Sheila and I hope to demonstrate the truth of this lesson. By singing together, by praying together, by learning together, we feel that we can show hope and healing to our community.”

For more information contact the Temple Anshe Amunim office at (413) 442-5910 or email templeoffice@ansheamunim.org.

The forum will include a presentation of preliminary improvement options for the Lake Mansfield recreation area, including options for stormwater, accessibility, park, beach, parking, Lake Mansfield Road, and the boat launch as well as the relative costs of each. Public feedback will help inform the final range of preferred scenarios and will be shared at a future public forum. All are invited to attend.

Pittsfield — On Thursday, January 14, at 10:45 a.m., the Jewish Federation of the Berkshires will present columnist and novelist Ruth Bass who will discuss and read from her two published novels (“Sarah’s Daughter” and “Rose”) about her grandmother’s life. There is no charge for the program at Congregation Knesset Israel.

Bass’s grandmother was born in Charlemont, Mass., and grew up on a farm. After her mother died at an early age, Bass’s then 14-year-old grandmother was expected to take over the house. “It must have been a hard time for her,” Bass related, “but despite all the days we spent together, she never talked about it. Only a couple of kernels from that era came my way, but the things I knew were intriguing enough to make me want to write ‘Sarah’s Daughter.’ ” Bass recently finished the third book in the series.

Bass worked as police and court reporter for the Berkshire Eagle prior to her marriage to Milton Bass, returning in 1977 to the paper after a hiatus and eventually holding the position of Sunday editor before leaving in 1996. Her Monday column has been published for 35 years.

Pittsfield – The Berkshire Organization for Original Music (BOOM), spearheaded by local musicians Tom Conklin and Sandy McKnight, is a group of area musicians looking to generate interest in building an original music scene in the Berkshires.

BOOM will reach out to area musicians of all genres, music venues, theaters, recording studios, music stores, colleges, publications, radio stations, and anyone interested in creating and maintaining a thriving area original music scene via an organizational meeting at Berkshire Community College’s Robert Boland Theatre on Tuesday, January 12, at 7 p.m. All area musicians who write and perform their own music or are looking to do so and anyone who supports local music are encouraged to attend.

Those who attend are welcome to bring ideas and will be encouraged to participate in the discussion.