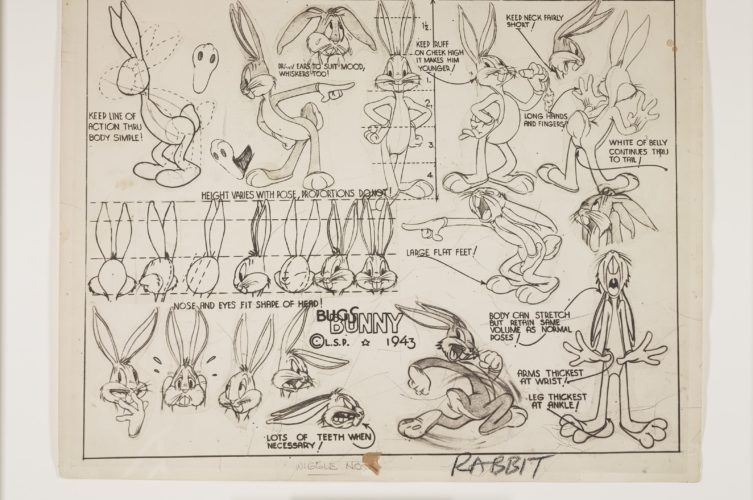 Images of Bugs Bunny are included in 'The Art of Warner Bros. Cartoons,' opening Saturday, Jan. 25, at the Berkshire Museum in Pittsfield. Image courtesy Berkshire Museum

Berkshire Museum to exhibit ‘The Art of Warner Bros. Cartoons’

Pittsfield — On Saturday, Jan. 25, from 1 to 5 p.m., Berkshire Museum will host an opening celebration for its exhibit “The Art of Warner Bros. Cartoons,” an exhibition of original artwork from the world of “Looney Tunes” and “Merrie Melodies.” The celebration will feature family-friendly activities, cartoon screenings and light refreshments.

During the exhibition, Warner Bros. fans of all ages can see production artwork including drawings, paintings and transparent celluloids used to create some of the studio’s classic cartoon shorts from their debut in 1930 through the early 1960s. Artwork, timelines, film clips and interpretive panels shed light on the creative process behind the scenes, trace the development of each iconic cartoon star, and explore the techniques through which animated films are made. Works by all of the studio’s directors will be represented and a complete cast of Warner Bros. characters will be on display, from Porky Pig, Daffy Duck and Bugs Bunny, to Marvin the Martian, Pepe Le Pew, Yosemite Sam and even Sniffles the Mouse and Witch Hazel.

Alongside more than 160 drawings, paintings, cels, and related art objects used in the making of the classic cartoons, visitors will discover a unique assortment of scientific and historical specimens from Berkshire Museum’s collection that provide real-world context to animated favorites. Guests will be invited to step into memorable Warner Bros. scenarios and pose with beloved characters for souvenir photos. On Saturday mornings throughout the run of the exhibition, visitors can take a seat in Berkshire Museum’s theater to enjoy a collection of the classic shorts. In the Museum’s Lab 102 space, adults and children will be invited to experiment with animation techniques through hands-on activities.

The event is included with museum admission. The exhibit will be on view through Sunday, May. 10. For more information, contact the Berkshire Museum at (413) 443-7171.

Salisbury, Conn. — On Saturday, Jan. 25, at 4 p.m., Scoville Memorial Library will host Dan Gettinger, founder and co-director of Bard College’s Center for the Study of the Drone, for a talk titled “How Military Drones Are Changing the World.”

Once a novelty, drones have become standard military equipment. From conflict zones around the world to domestic natural disasters, military drones are playing an increasingly prominent role. Whether used by rogue states or major powers, they present new forms of technology that can reduce risk or exacerbate conflicts.

Gettinger will present a crash course in the history and present-day applications of military drones. Gettinger is a fellow at the Modern War Institute at West Point and an expert at the Forum on the Arms Trade. He is the author of “The Drone Databook,” an encyclopedic assessment of the military drone capabilities of over 100 countries. During his talk, he will present some of the latest original research by the Center and lead a discussion on the consequences of military drone proliferation.

The event is free and open to the public. For more information, contact the Scoville Memorial Library at (860) 435-2838 or scovlibn@biblio.org.

Canaan, Conn. — To assist those who put their lives on the line every day, Mountainside is hosting free first responders support groups on the last Thursday of every month, offering first responders a safe space to share experiences and receive support from their peers as well as licensed mental health professionals.

“Many first responders experience an increased sense of alertness, which can make them constantly feel like they are on edge,” said Amy Sedgwick, executive director and clinical director at Mountainside. “They may suffer from symptoms of Post-Traumatic Stress Disorder (PTSD) or other symptoms of acute anxiety, which can make it difficult for them to focus and can contribute to long-term depression. The intensive nature of their work, coupled with stress, can also increase their risk of developing a substance use disorder.” Research from the Center for the Study of Traumatic Stress shows that the rate of PTSD among first responders is estimated to be between 15 and 30%.

Support group participants will be able to connect with others and gain the knowledge they need to deal with stress and trauma in a healthy way. Each meeting will be led by a licensed clinician with specialized trauma training. The next meeting of the group will take place Thursday, Jan. 30, from 6 to 7 p.m. For more information, contact Mountainside at (860) 824-1397.