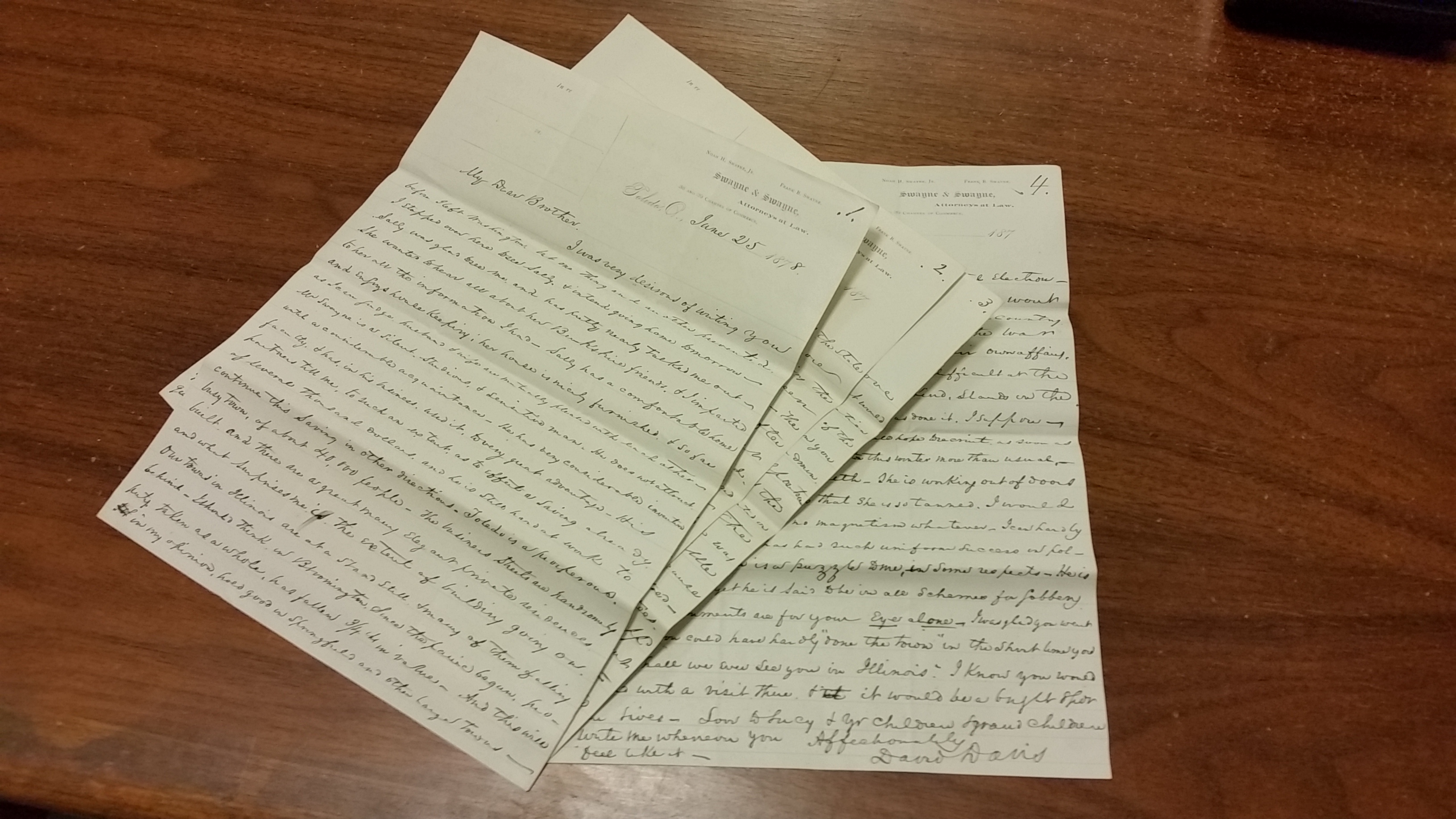 Lenox — In February of 2014, Amy Lafave of the Lenox Library and Fordham University master’s degree candidate Eoin Higgins discovered a letter sent to Lenox resident Julius Rockwell in 1878 by his brother-in-law U.S. Supreme Court justice David Davis. Higgins and Lafave had been perusing the papers for Higgins’ master’s thesis, which concentrated on Julius Rockwell and his 1855 run for governor of Massachusetts. The letter was found in two pieces, one part by Higgins and the other by Lafave. When the two were put together, the historical significance was obvious.

The results of the 1876 presidential election results were very close: Rutherford B. Hayes won the electoral college and his Democratic opponent Samuel Tilden won the popular vote. Former Supreme Court Justice David Davis, a well known Independent, was nominated to be one of a select group of men to decide the fate of the election and come to a compromise between the two camps.

In a bid to sway Davis’ vote for Tilden, the Illinois legislature elected him to the Senate, as it was believed that Davis would see his election as a debt to be paid and rule for Tilden. Davis immediately resigned his Supreme Court position to serve as Senator, scuttling any chance of serving on the commission and dashing the hopes of the Illinois legislature that Davis’ vote could be bought. In the aftermath a pro-Republican nominee was appointed in Davis’ stead and Hayes became president. As a compromise Reconstruction was ended in the South.

Davis’ true feelings on the election had been unknown until Higgins’ and Lafave’s discovery, as the letter they found contains a quote that shows Davis’ hand: “I have no doubt that Tilden was cheated, but investigations wouldn’t make it any plainer.” This makes clear that Davis was leaning towards declaring Tilden the winner, and the consequences of such a move could have drastically changed the direction of the country.

The letter currently resides in the collection at the Lenox Library. Lafave is planning a volunteer effort to organize the Rockwell papers and hopes to display the letter in an event that will coincide with the town of Lenox’s upcoming 250th anniversary celebration.

North Adams — Furthering the ongoing cultural partnership between Jacob’s Pillow’s and Mass MoCA, New York City-based Big Dance Theater will present “This Page Left Intentionally Blank,” a work-in-progress performance-based audio/docent tour. The interactive work aims to change the experience of a museum by reinventing the ways in which art is seen.

Led by the artistic vision of Jacob’s Pillow Dance Award recipients Annie-B Parson and Paul Lazar, Big Dance Theater has created more than 20 multidisciplinary works in collaboration with leading actors, dancers, composers, and designers and has been presented around the world and in the U.S. at venues including the Brooklyn Academy of Music, Dance Theater Workshop, The Kitchen, New York City Center’s Fall for Dance Festival, New York Live Arts, and Jacob’s Pillow Dance Festival.

An exclusive MASS MoCA engagement, “This Page Left Intentionally Blank” will take place at noon and 3 p.m. on Wednesday, February 10; Friday, February 12; and Saturday, February 13. Tickets are $5 in addition to the gallery admission fee and are limited. For tickets and more information, see the Berkshire Edge calendar or call the Mass MoCA box office at (413) 662-2111 x1.

Participants will learn about snowshoe equipment and safety before heading out for a ramble through wetlands and gentle slopes. Participants are encouraged to dress warmly and in layers and to bring snowshoes if they have them. A limited number of adult and child snowshoes will be available if reserved ahead of time.

The cost of the hike is $15 for non-members, $10 for members, and free for children. Registration for the hike is required. Call the Pleasant Valley office at (413) 637-0320 to register. The hike will take place regardless of whether or not there is snow on the ground.

A maximum of 30 student will be chosen by a selection committee comprised of members of the business community and will be based on demonstrated leadership qualities both inside and outside the classroom. Applicants must be current high school sophomores, entering their junior year this fall, and all material must be received by the Chamber/1Berkshire office, 66 Allen St., by 4 p.m. on Friday, February 26. Applications and more information about the program are available online. Tuition for the program is $100 and limited tuition assistance is available. Call (413) 499-1600 x117 with questions.

Winds in the Wilderness concert

Copake Falls, N.Y. – On Sunday, February 7, the Church of St. John in the Wilderness will host a Winds in the Wilderness concert featuring Sharon Powers (flute), Judith Dansker (oboe), John Myers (guitar), and Pete Toigo (bass). The concert will include the music of Corelli, Ginastera, Mozart, Debussy, Jobim, and Myers.

There is a $15 suggested donation at the door; the concert is free for children. Refreshments will follow. For more information call (518) 329-1577.