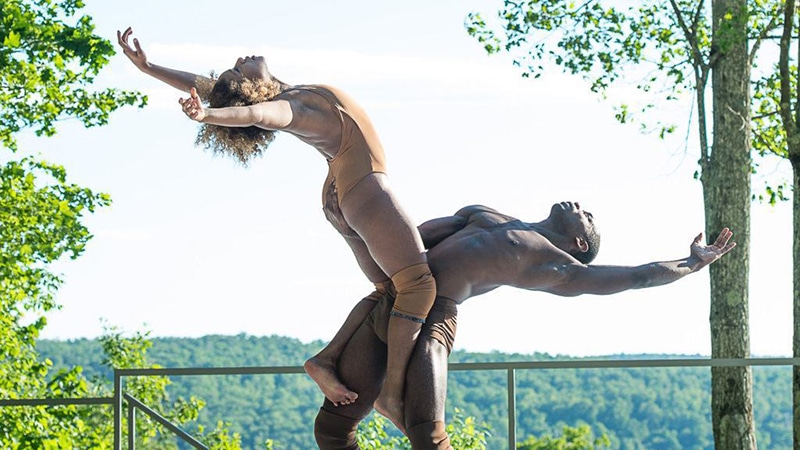 Becket — On Thursday, April 23, at 7 p.m., Jacob’s Pillow will host a livestream to share the full-length version of Pilobolus’ “Branches.”

“Branches” was commissioned by Jacob’s Pillow for its 85th anniversary season in 2017. Pilobolus created the work in dialogue with the Pillow’s natural setting and performed it on Pillow’s Inside/Out Stage. Following the screening of the recorded work, Pillow director Pamela Tatge will speak live with Pilobolus co-artistic directors Matt Kent and Renée Jaworski, plus composer and sound designer David Van Tieghem, about how they created “Branches” and all that has happened since its 2017 premiere.

Founded in 1971, Pilobolus tests the limits of human physicality to explore the beauty and the power of connected bodies. The company has performed on Broadway, at the Academy Awards and the Olympic Games, and has appeared on television, in movies, in advertisements, and in schools and businesses, creating over 120 dance works.

The event is free and open to the public. Registration is required. For more information or to register, see the Berkshire Edge calendar or contact Jacob’s Pillow at info@jacobspillow.org.

Stockbridge — The Norman Rockwell Museum is calling for art for its upcoming “Home Is 2020” virtual exhibit.

NRM’s current exhibit “Finding Home: Four Artists’ Journeys” and the accompanying Berkshire Immigrant Stories Project inspired a series of art-making workshops designed to explore the meaning of home that were to be led by Massachusetts College of Liberal Arts professor Melanie Mowinski and her advanced design students. Since it is not currently possible to gather at the museum due to concerns about the spread of COVID-19, the workshops have been reimagined and the public is invited to make art on the meaning of home while they are at home. Participatory activities include linoleum block prints, mixed media, drawing, singing, poetry and more.

The submission deadline is Monday, June 1. Submission guidelines and participation instructions can be found online. For more information, contact homeis2020@nrm.org.

Copake, N.Y. — In association with the Copake Grange, the Two of Us Productions will present the next offering in its Virtual Staged Readings Series, “Agnes of God” by John Pielmeier, Saturday, April 25, at 7 p.m.

“Agnes of God” tells the story of a novice nun who gives birth and insists that the child was the result of a virgin conception. A psychiatrist and the mother superior of the convent clash during the resulting investigation. The play was made into a 1985 film of the same name, which was nominated for three Academy Awards.