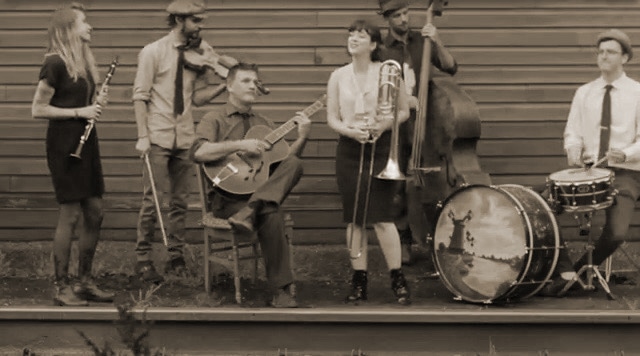 The Lucky 5 are gearing up to record an album in Tennessee. Photo: Kip Beacco

Lucky 5 to record album in Tennessee

Great Barrington — The Lucky 5 will record their first LP in Bristol, Tennessee, in December.

“We have been working really hard in the past year writing and working up new material and perfecting our standards. The time for another album is way overdue, and to record it on vinyl is just icing on the cake,” said the band’s guitarist, Kip Beacco.

Bigtone Records, which will also release the album on CD, connected with the band at September’s Oldtone Roots Music Festival in September in Hillsdale, New York. Beacco and the band’s upright bass player, Matt Downing, the producers of Oldtone, were impressed with the quality of the old Ampex analog recordings Bigtone Records produced at Oldtone. Said Downing, “When I heard the live recordings Bigtone produced this year, I knew we found our team for the next project.”

Included in the playlist will be original compositions by the band’s fiddler, Jonathan Talbott, and two versions of “Mon amour comment pourrais-tu (My Love How Could You),” written by Beacco and translated into French by Aurelien De St André.

An Indiegogo campaign is raising funds for the trip and the recording, which will be only partially defrayed by gigs along the way. The goal is set at $10,000, which will cover transportation, housing and expenses for six band members; studio recording time; pressing the album to vinyl and burning to CD; and other costs.

Friends of the band have organized a sendoff party Sunday, Dec. 8, at Prairie Whale, where the band will be playing their regular gig from 6:30 to 9 p.m. All tips to the band at the party support the trip.

Keane is a founding member of the nationally touring Whiskey Treaty Roadshow. Cusson is a recent winner of the John Lennon Songwriting Contest and has performed an Australian tour with Dave Koz, in Las Vegas with Christina Aguilera, and on a PBS special with Megan Hilty.

Tickets are $25 for table seating and $20 for a barstool. For tickets and more information, see the Berkshire Edge calendar or call Barrington Stage Company at (413) 236-8888.

Pittsfield — The Eagles Community Band will perform a holiday concert Sunday, Dec. 8, at 3 p.m. at First United Methodist Church. On the program are selections including “A Chanukah Celebration,” “Fantasia on A Hymn by Praetorius,” and a medley from “Frozen.” The Eagles Band Trombone Ensemble will perform a prelude to the concert at 2:15 p.m.

The Eagles Band was founded in 1936 and is the oldest continuing performance ensemble in the Berkshires. In 1993, the band reorganized and made a decision to become a nonprofit community band, which saw its performers donating their time for the love of playing.

The event is free and open to the public. For more information, contact Deanna Fraher at eagles.fraher8@gmail.com.

Lenox — On Tuesday, Dec. 10, from 6:30 to 8 p.m., Katie’s Korner at the Lenox Library will host “Family-Style Felting: Special Stitch Around” with fiber artist Regina Mason.

Mason, who teaches traditional and contemporary fiber arts to multi-generational audiences, will demonstrate the fundamentals of wet felting with wool. Participants will learn to make felted woolen beads and flowers that can be turned into jewelry and ornaments, or they can bring bars of soap to make scrubbing bath bars.

The program is free and open to the public, and is appropriate for all ages. For more information, contact the Lenox Library Youth Department at (413) 637-0197 x105 or kwallick@lenoxlib.org.