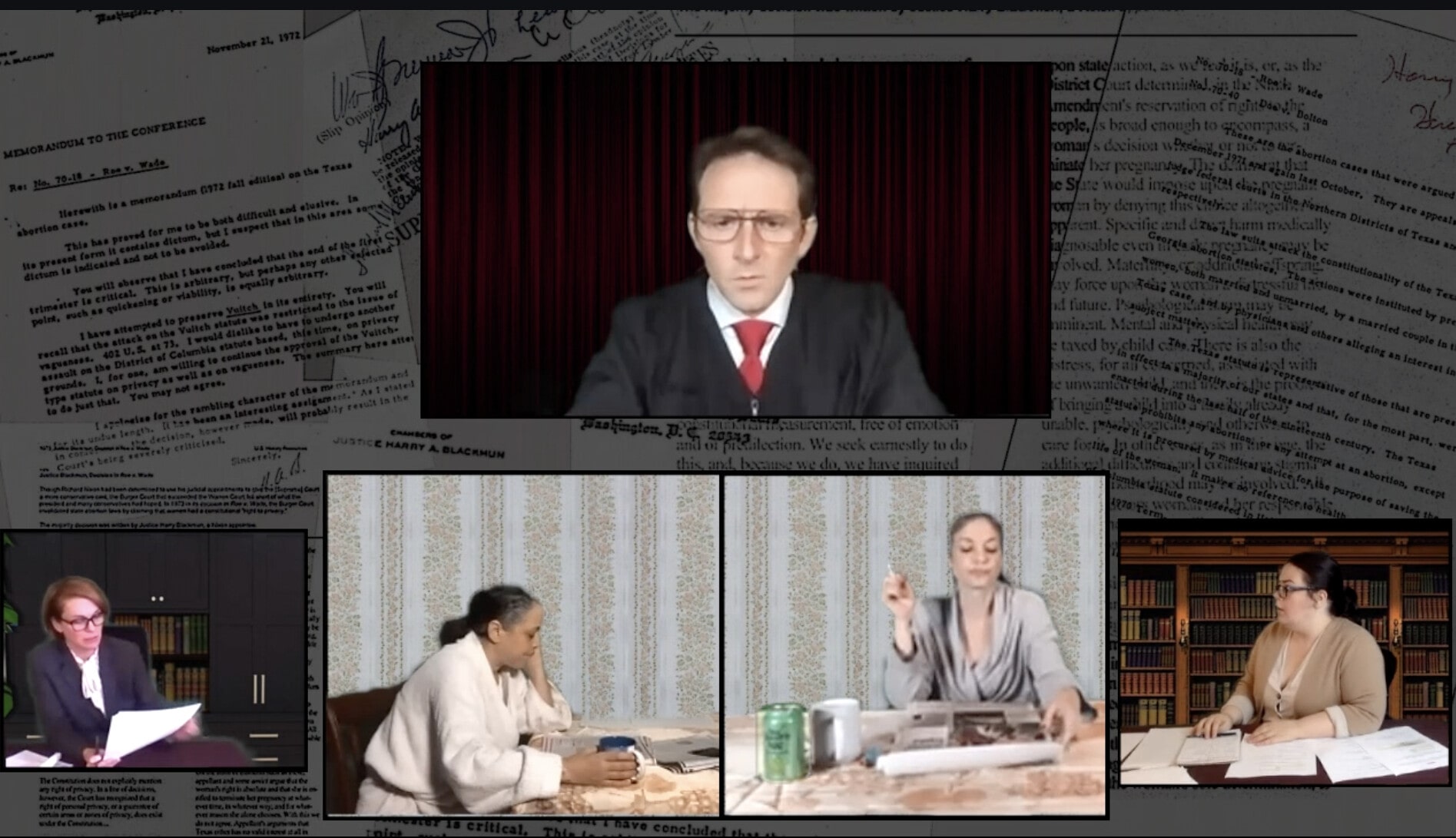 Directed by WAM artistic director Kristen van Ginhoven and supported with theatrical design elements, the large ensemble cast of “ROE” will illuminate the history of one of the most polarizing social issues of the modern era: the U.S. Supreme Court ruling on Roe v. Wade that established a woman’s right to an abortion.

The cast is led by Tara Franklin as Norma McCorvey, the woman who became “Jane Roe” in the 1973 case; and Tracy Liz Miller, who has previously worked with WAM as a Fresh Takes reading director, as lawyer Sarah Weddington. Susanna Guzmán appears as Connie Gonzales, Norma’s longtime partner; and assistant director Catherine Dickerson plays Roxy. MaConnia Chesser and Ryan Winkles lead the ensemble, which includes Vivian Burnham, KD McTeigue, Daniel Rios, Jr. and Wendy Welch, each of whom appears as multiple characters.

ROE was commissioned by the Oregon Shakespeare Festival in 2012. It was developed at the University of Texas and the Kennedy Center as well as at OSF’s Black Swan Lab before it played for 70 performances in Ashland, Oregon, and then had runs in Washington, D.C.; Berkeley, California; and Sarasota, Florida.

Tickets are $15-$100. In keeping with WAM’s double philanthropic mission, a portion of proceeds will support the Amherst-based Abortion Rights Fund of Western Massachusetts, Railroad Street Youth Project in Great Barrington and SisterSong in Atlanta, Georgia. For tickets and more information, see the Berkshire Edge calendar, or contact WAM Theatre at (413) 274-8122 or info@wamtheatre.com.

Great Barrington — In coordination with a march on Washington and sister actions in cities and communities across the country, the Great Barrington Women’s Rally will take place Saturday, Oct. 17, at noon in front of the Great Barrington Town Hall, 334 Main St. The event is one of over 250 happening nationwide on Saturday, and is sponsored by a national coalition including Women’s March Win, Coalition of Labor Union Women, MomsRising, NARAL, National Women’s Law Center, Planned Parenthood Votes, She the People, SuperMajority, UltraViolet and #VOTEPROCHOICE.

Writes local organizer Mariana Cicerchia: “We are joining together as women from all walks of life to vote in record numbers, demand that every single vote is counted, and deliver our democracy. We have suffered through this season of crises, and we have had enough. We are rising up here in Great Barrington to take our power back.”

Performances will be offered by Berkshire Pulse, BodySonnet, Berkshire Bateria, Prone to Mischief, Berkshire Roller Girls and others. Masks and social distancing are required. Attendees are asked to bring their own hand sanitizer and follow all COVID-19 safety protocols. For more information or to RSVP, see the Berkshire Edge calendar.

Vollmer holds a fine art degree from the School of the Art Institute of Chicago and a master’s degree from the University of Arts in Berlin, Germany. Her career as a photographer began when she took a job as a professional fine art printer in New York City for artists Irving Penn, Louise Lawler, Saul Leiter and others. After graduate school, Vollmer managed the lighting studio at the Maine Media Workshops. Her personal projects have led her to photograph throughout Europe, the U.S., India, Cambodia, Turkey, Cuba, Costa Rica, Mexico, Panama and Colombia.

The exhibition will be on view through Thursday, Dec. 31, by appointment. The reception is free and open to the public. For more information, contact the Lisa Vollmer Studio & Gallery at (413) 429-6511 or contact@lisavollmer.com.

To Schantz, moments of change are moments of celebration. “Atlantic Sunrise” captures the moment a day begins anew, the ocean waves rolling softly. Red, yellow, and orange pour outward into clouds slowly colored by the sun’s warmth. The same view of the ocean sunrise transforms in “After the Storm, Atlantic Sunrise” with energetic waves and sunlight reaching through purple clouds to diminish darkness. “River Twilight, Crescent Winter” shows a time of day either after sunset or before sunrise, the sun indirectly visible only by its mere glow. Schantz replicates a single location found in nature, revealing and accepting all its fluctuating moods and colors.

Schantz received his master’s degree in painting at University of California, Davis and his Bachelor of Fine Arts at Syracuse University. He also studied at the Hornsey School of Art in London and at the Skowhegan School in Maine. His works are included in the collections of the Berkshire Museum, the Art Complex Museum, Rose Art Museum, Skidmore College, Bard College at Simon’s Rock and others. He is the owner of Schantz Galleries in Stockbridge.

The show will run through Sunday, Nov. 15. For more information, contact the Pucker Gallery at (617) 267-9473 or contactus@puckergallery.com.