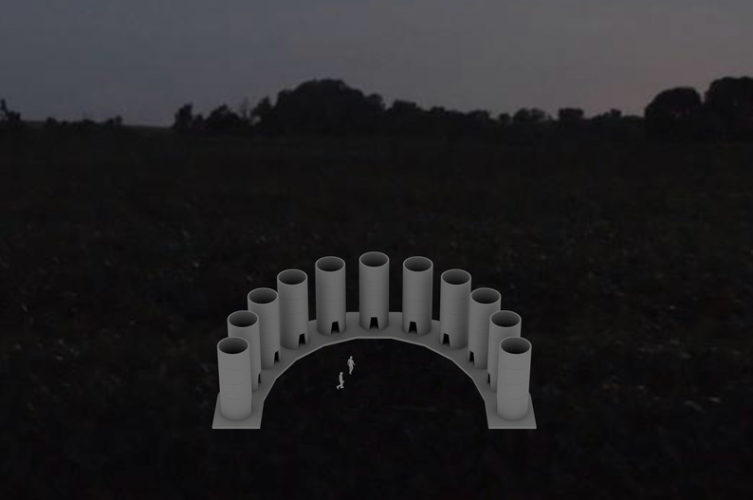 NORTH ADAMS — The Massachusetts Museum of Contemporary Art (MASS MoCA) recently announced that “The Pipes,” a large-scale outdoor sculpture by Taryn Simon, and a Skyspace by James Turrell will be on long-term view on the museum’s campus starting May 29, 2021.

“The Pipes” are an immersive experience, offered to the public as a sacred space for reflection, impromptu performance, and stargazing. The sculpture was commissioned by the Park Avenue Armory and Artangel for the 2016 exhibition “An Occupation of Loss.” The 11 structures that make up the installation — which Simon originally designed in collaboration with Shohei Shigematsu of architecture firm OMA — are modular, and have been adapted by Simon and Shigematsu for the MASS MoCA campus. Reconceptualized at MASS MoCA, “The Pipes” will be installed outdoors, offering a space for visitors to quietly contemplate or to fill with the sounds of their own instruments, vocals, and accidental and intentional performances. The sculpture will be sited adjacent to Joe’s Field, the museum’s largest performing arts venue.

In addition, a new Skyspace by James Turrell will augment one of the world’s most comprehensive experiences of installations by the artist, while realizing a vision the artist had when visiting the museum’s campus in 1987. The Skyspace will join a long-term exhibition of Turrell works at MASS MoCA, which includes one work from each of the six decades of the artist’s career. With this addition, the museum will now have a major example of every category of the artist’s work on display. The museum will also present a focused exhibition of Turrell’s ceramics, “Lapsed Quaker Ware,” from May 29—October 30, 2022.

Turrell’s Skyspaces are apertures in the ceilings of rooms or buildings that frame the sky as a canvas with infinite depth. They function as naked-eye observatories of the sky, which encourage a focused contemplation of light and space. Turrell created his first Skyspace in 1974, and today over 80 exist in public and private collections worldwide. MASS MoCA’s Skyspace will be the artist’s largest freestanding circular piece to date — 40 feet in diameter and 40 feet high — with a capacity for 50 viewers.

GREAT BARRINGTON — The Town of Great Barrington Summer Concert Series is accepting proposals from musicians for outdoor concert performances at the Town Hall Gazebo during the summer of 2021.

All performances will be subject to the state COVID-19 guidelines for outdoor gatherings at the time of the event.

Interested performers are invited to send a brief description of an event proposal, including contact information, to gbbandstand@townofgb.org, or by mail to Selectboard Office, Town of Great Barrington, 334 Main Street, Great Barrington, MA 01230.

Pedro Lemebel (1952–2015) was a poet, performance artist, and queer activist whose groundbreaking work critiqued the culture of homophobia among Leftists during and after Pinochet’s dictatorship. His manifesto, “Hablo por mi diferencia (I speak from my difference),” endures as a challenge to oppression within activist movements.